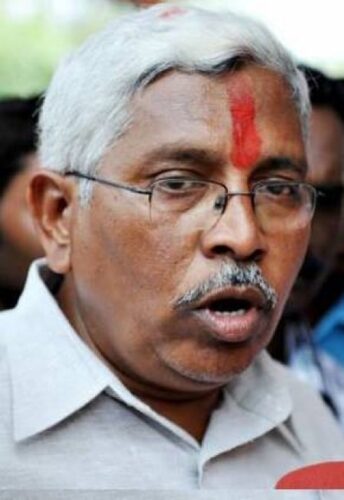 The former professor, who has of late stepped up attack on the State government by taking up sand mafia issue, farmers problems, land acquisition for projects and unemployment issue, has started the “formal” process of floating a political party for the aam aadmi (commoners) in the State.

Lending credence to this argument, he has asked all the members of his organisation to get ready to take political plunge. According to sources, all the district level leaders of the TJAC have been asked by the organisation leadership to start preparations for the new political party.

The organisation has started the process of forming women and farmers wings in all districts. In the coming days, these wings will help the proposed political party in propagating its ideology among women and ryots, who play key role in deciding the electoral fortunes of any political party.

Sources close to Kodandaram disclosed that the process of taking legal and statutory measures to float a new political party will begin in the second week of January. A team of advocates and senior members of the TJAC will leave for New Delhi after second week of January to take the suggestions of Supreme Court advocates on the steps that are needed to be followed to register the party with the Election Commission in a fool-proof manner.

“Even after launching the new political party, the TJAC will remain in present form in order to play the watchdog role in the State. Hence, discussions are going on whether to register the new party on Kodandaram’s name or some senior member’s name.

We are also preparing the constitution, bylaws and manifesto of the party. Our manifesto will be based on the aspirations of the Telangana martyrs, that means our proposed party’s objective is to achieve Samajika Telangana,” a senior member of the TJAC told KhabarLive.

It was already reported in these columns that Kodandaram will disclose the name of the political party by the end of this month, after holding the TJAC’s steering committee meeting in Hyderabad. Of all the names, Telangana Jana Samithi and Sakala Janula Party are being closely examined, sources said.

In order to build the tempo by the time of launch of the party, which might be in the first or second week of February, the TJAC chairman wants to hold another massive protest on unemployment issue in the State capital.

This protest will be preceded by writing letters to Governor ESL Narasimhan and Chief Minister K Chandrasekhar Rao urging them to take steps to fill all vacant posts in the government by the unemployed youth, en masse.

The TJAC leaders are at present busy with Rythu Yatras being organised in all districts in the State so as to list out the problems faced by farmers. #KhabarLive