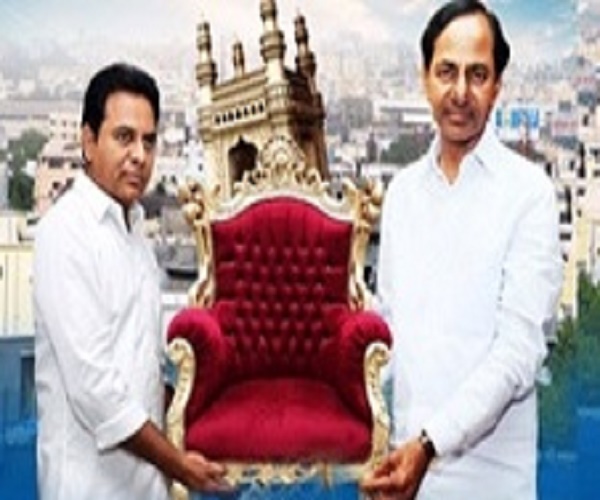 As Telangana Chief Minister K Chandrashekar Rao deciding to enter national politics, his son and IT Minister K T Rama Rao has taken over the responsibility of the party and would be touring the districts by visiting important Assembly constituencies to explain development works of the Telangana Rashtra Samithi (TRS) government to the masses.

The Chief Minister has made his intentions to enter national politics clear on Sunday by pitching for a front of non-Congress and non-BJP parties. The TRS chief’s son has been taking over the party affairs in the recent times as he conducted several district tours. The IT Minister had recently travelled to Gadwal, Armoor and Tungaturthi in Suryapet. The Minister used the platform to promote the government schemes and also target the Congress. The TRS and Congress leaders had a verbal duel after his visit to these places.

On Monday, Rama Rao visited Parkal in Warangal and took part in various developmental activities and also addressed public meeting in the constituency of Ch Dharma Reddy. The Minister is slated to visit Kodad, the constituency of Telangana Pradesh Congress Committee (TPCC) president N Uttam Kumar Reddy, on Tuesday where he would address the people and also take part in developmental works.

The Minister has been speaking about the help the government was giving them specifically. In the Parkal meeting, Rama Rao said the Chief Minister had sanctioned Rs 15 crore only for Parkal, which no other government had given in the past, sanctioned textile part and sought the blessings of people stating that the government was working only for their benefit. Sources said the TRS leader would touch important constituencies targeting strong leaders from Opposition parties in general and the Congress in particular.

The Minister would visit Assembly constituencies of K Jana Reddy (Nagarjunasagar), K Venkata Reddy (Nalgonda) and others soon, sources said. “The Chief Minister had already said he would enter national politics and in this scenario, Rama Rao would be taking the party to the people,” said a senior TRS leader.

Of late, Rama Rao has been taking the responsibilities of the party on his shoulders. He had campaigned extensively in the Greater Hyderabad Municipal Corporation elections and achieved results which no other party had achieved. While the Opposition parties alleged that the TRS was a family party, the pink party leaders were quick to fire back reminding that the Congress had no right to talk on the dynasty politics. #KhabarLive