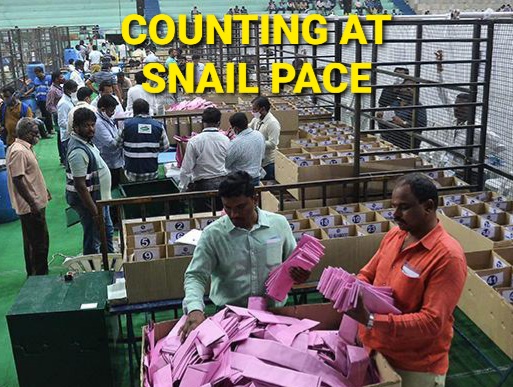 The counting of votes in the elections to the two MLC seats from graduates’ constituency in Telangana is going on at a snail’s pace and it will take at least one more day to get the final result.

In both the graduates’ constituencies – Hyderabad-Ranga Reddy-Mahabubnagar and Khammam-Warangal and Nalgonda, the TRS candidates are leading over their rivals when the last reports came in.

What is surprising for the people who are involved in the counting is that there has been unprecedented number of invalid votes in both these constituencies, which is huge compared to the number of votes polled by many candidates.

For example, at the end of third round of counting of votes in Hyderabad-Ranga Reddy-Mahabubnagar constituency, there were as many as 10,082 invalid votes.

Similarly, in Khammam-Warangal-Nalgonda graduates’ constituency, the number of invalid votes at the end of fourth round was 12,475 votes.

One can imagine how many invalid votes would be there after the completion of all the rounds of counting. This led to sharp comments in the social media against these so-called graduate voters.

“After seeing this huge number of invalid votes in the counting of votes for the MLC elections, one gets the feeling that these graduate voters don’t deserve any government jobs. So, instead of issuing job notifications, it is better these “Oxford graduates” are paid unemployment allowance,” a netizen commented.

Another senior journalist commented: “I pity these graduate voters whose votes have become invalid in such huge numbers. Their teachers deserve all the credit for grooming such graduates.”

An analyst said the huge number of invalid votes is an indication to the enrolment of bogus voters.

“These political parties appear to have enrolled bogus graduate voters in a big number, but failed to train them how to cast their votes in the MLC elections. So, they exercised their franchise according to their will,” he said.

Let’s wait and see the fate of the MLC aspirants who represents a huge political party with huge support. #KhabarLive #hydnews