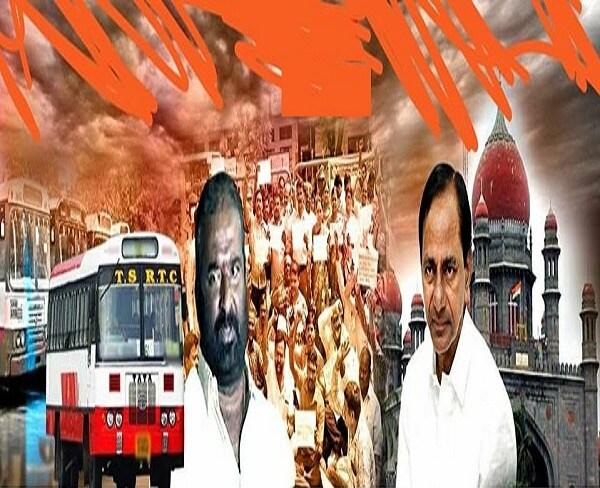 The Telangana State Road Transport Corporation (TSRTC) strike, going on for over one-and-a-half months, has taken many curious turns. It started with a demand for merger of the RTC with the government.

Demands like reimbursement of dues from the government to the RTC, stoppage of the proposed privatisation of routes, etc, were added as collaterals. When the matter went to court, the court advised to give up the demand for merger while asking the government and the unions to sort out the problems.

The RTC called for discussions. The unions, again raising the issue of merger, like they did before, walked out of the discussions. Then it was a free-for-all. The opposition parties sided with the unions and some civil society activists too have joined in the melee.

In court hearings, the matter of government dues and other financial issues came up for a greater degree of discussion. Senior IAS officers were summoned to explain. Finally, it transpired that the government has no dues. It paid about Rs 4,200 crore as its payments and increased the salaries of employees 67% during the last four years. The court arrived at around Rs 47 crore payment on certain minor items and salary for September. The RTC said it does not have the funds to pay. And the issue ended in a stalemate. The court again asked both to settle the matter before November 11 but to no avail.

Untenable Demands
The unions intensified the strike with the help of the opposition parties. The BJP took a lead role in it. In the court hearing on November 9, the Centre’s counsel said the TSRTC was not fully divided from the APSRTC and was not a separate entity yet.

Therefore, the proposal of merger and the government’s proposed issuing of new private permits for TSRTC are not tenable. Neither the unions nor the opposition identified any specific issue other than merger and privatisation. As the proceedings progressed, merger, payment of dues and increase in the salaries did not find much traction.

Meanwhile, there were some more PILs on the strike. One of them was on the proposed attempt of privatisation of the TSRTC. The high court asked for the transcript of the Cabinet decision and postponed the hearing. The Unions gave a call for a big protest march on November 9 which was denied by the police in view of the Ram Mandir decision.

Despite this, there was an attempt to take out the march backed by the opposition parties. It looked like an unsuccessful attempt to create political unrest in the name of RTC strike. The Cabinet decision was found to be on issuing route permits to private unions and not privatisation of RTC.

Confused State
It is now an entirely confused situation. Nobody knows what this strike is for and why it is being continued. The situation looks like the story of the elephant and several blind men groping to describe it. After a few more court hearings, we came to know that the TSRTC is in a precarious financial position with about Rs 10,000 crore loss.

The management is not in a position to manage it. The government supporting it does not seem to be practical. Merging with the government will not improve the services to the public. So, the government wants to come out of it and find a sustainable solution.

Accordingly, the government now proposes to give 50% of the routes to private bus players on a contract basis. There will be income to the RTC, there will not be retrenchments or reduction of salaries to employees. The RTC retains its administrative control. There will be a regulatory commission to regulate bus charges.

The public will be allowed all the concessionary benefits both in public and private buses. It is being planned to make the RTC run on its own in the long-run, with sustained financial viability and provide improved services to the public under the oversight of the government. It certainly looks like a win-win situation.

No Welfare Organisation
In such a scenario, the strike is not comprehensible. After all, the RTC is for the service of the public and not a social welfare organisation of its employees. An elected government has the right to frame a public policy in accordance with the laws to provide better services to the public, by making changes in an ailing public utility service organisation. The employees and the political parties are also the stakeholders, they can demand to know the change in any public policy and can make a constructive review to make the policy better.

Finally, the high court agreeing that it does not have the powers to adjudicate on the strike and referring the matter to the State Labour Commissioner to resolve it in two weeks has come a little too late.

Meanwhile, some employees lost their lives – a tragedy that could have been avoided if the issues were sorted out early. Even now, it is unlikely that the Labour Commissioner will be able to resolve this onerous issue. If the unions obdurately continue the strike, the case may land in Labour Court, which may result in some more time-taking litigation. The unions are now clearly caught in a cleft stick. They need to get out of it sensibly.

A few more PILs are pending on the issue. One against the privatisation is important. But as the things stand, there was no privatisation of the RTC, but it was only to privatise 50% of the routes.

It is done as per the Motor Vehicles Amendment Act 2019. Except giving it a fair chance, no other alternative is perceptible. The strike, the legal filibuster on it and the political heat created have caused a great deal of inconvenience to the public, employees and increased the loss of the already seriously ailing RTC. In hindsight, it seems to be a needless self-defeating campaign. #KhabarLive