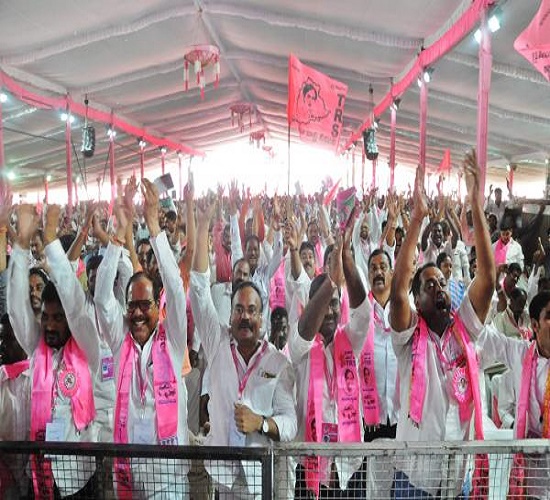 As one member Palvai Govardhan Reddy (Congress) died in June last year, his seat has been vacant since then. Govardhan Reddy’s “actual term” along with another two members — Rapolu Anand Bhaskar (Congress) and C M Ramesh (TDP) — will end by April 2. That means, in total, three seats in the Upper House of Parliament will fall vacant by April 2 from the state. As per electoral norms, the Central Election Commission will have to start the election process for the three seats prior to the scheduled retirement of the members one month to 45 days in advance.

All the three vacant Rajya Sabha seats are likely to be bagged by the ruling TRS, given the party’s numerical strength in the House. Will CM’s nephew Santhosh be sent to Upper House?

Interestingly, this will be the last Rajya Sabha biennial poll in the state before the 2019 general polls. Following this, race has already begun in the pink party for getting Upper House berths. As chief minister K Chandrasekhar Rao the other day announced that one seat will be given to Yadavas (Gollas and Kurumas), all eyes are on the remaining two seats.

Though several seniors are in the race for the two seats, party circles are curios whether Chief Minister’s nephew Joginapally Santhosh Kumar, who is now playing a key role in party affairs, be sent to the Rajya Sabha.

As Santhosh was recently elevated to the post of general secretary of the TRS, some of the party leaders are of the view that the pink party leadership might consider Rajya Sabha polls as an opportunity for the political entry of the young leader. Another argument is that, if bypoll is needed to Vemulawada Assembly constituency, as the present MLA from the segment Chennamaneni Ramesh is fighting a legal battle over ‘citizenship’ issue, Santhosh may be fielded as the TRS candidate.

The Assemblies of both Telangana and Andhra Pradesh will elect three Rajya Sabha members each this year, against the normal practice of two and four, respectively. This is due to the reallocation of the 18 seats of undivided AP During the reallocation, TS got seven seats and AP has 11.

In the 120-member state Assembly, TRS has 89 members. Congress’ present strength in the House is 13, MIM has 7 members, BJP has 5 MLAs, TDP has 2 MLAs whereas CPM has 1 member. With this strength, TRS can easily bag all the three seats. #KhabarLive