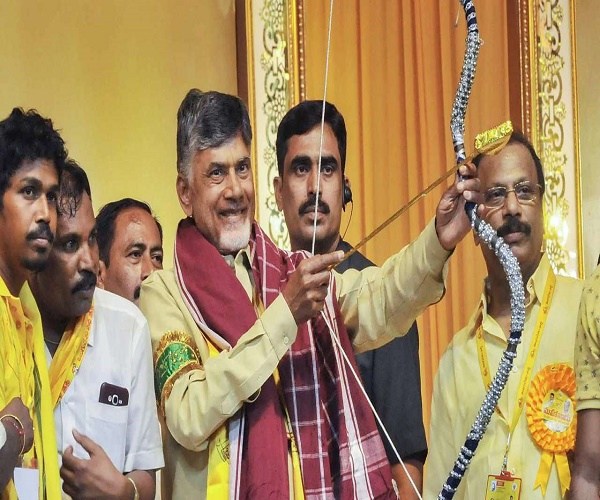 The Telugu Desam Party (TDP), a once successful political outfit in united Andhra Pradesh, seems to be fast losing its relevance in the political landscape of Telangana following back-to-back setbacks.

At a time when party chief N Chandrababu Naidu is having a historic face-off with YS Jagan Mohan Reddy of the YSRCP in neighbouring Andhra Pradesh, it seems that the party is barely able to stay afloat in Telangana.

After a setback in the recent Telangana Assembly elections, where it could win only two MLA seats after contesting 15 seats in alliance with the Congress, the TDP seems to have read the political landscape that it has lost its grip in the state. It decided not to field candidates in the Lok Sabha elections, opting to support the Congress instead.

From a party founded by former CM, N T Rama Rao that once held tremendous clout with an ability to sweep most, if not all seats in a given district, the TDP has been reduced to a point where it is struggling to put up even MPTC (Mandal Parishad Territorial Constituencies) and ZPTC (Zila Parishad Territorial Constituencies) candidates in the ongoing local body elections in Telangana.

During the Telangana struggle for separate statehood, while many members of the TDP supported the movement, party chief Chandrababu Naidu strongly opposed it. This, many feel, may have cost the party dearly after bifurcation of Andhra Pradesh in 2014.

Kunta Anjal Reddy, a senior journalist from Nizamabad, says that the party lost its significance after bifurcation. Ground-level cadre also lost ground quickly as there was a leadership vacuum in Telangana.

“KCR was successful in dubbing the TDP as an ‘Andhra’ party. Adding to this, political migrations (defections) by TDP MLAs along with their supporters, have reduced party numbers even more, affecting the morale of the cadre. As a result, even cadres are slowly compelled to tilt towards the ruling TRS to take political refuge,” he says.

Several observers feel that the party’s Telangana unit lacks a leader who is able to organise the TDP’s foot soldiers and can manage to stay in the news by targeting the ruling party.

ALSO READ:  Red Alert Sounded In Telangana For 'Every Hour One Covid Death'

Many senior leaders like Revanth Reddy, who was Naidu’s trusted confidant and more recently, Khammam strongman Nama Nageshwar Rao, also left the party, leaving many among the lower rung dejected.

Observers say that cadres were also disoriented as Chandrababu Naidu couldn’t offer much of his time for Telangana as he was busy with affairs in Andhra Pradesh.

Though the party is making efforts to stand out and portray that it is still relevant, by participating in protests and agitations over public issues, it knows that a lot of work needs to be done, if it needs to have a significant presence in the state.

Speaking to #KhabarLive, senior TDP leader and party politburo member Revuri Prakash Reddy feels that the TDP can have a bright future in Telangana if they are able to instil confidence in the people by standing with them.

Lashing out at defectors, he said, “All the people with selfish thoughts have left. Whoever is in the party now is committed. The future depends on the upcoming political circumstances and if we manage to instil trust among people that we stand by them and care for their issues. Then, the party will regain its past glory.”

The Telangana unit of the TDP is presently headed by L Ramana, who hails from the BC community.

Revuri also agrees that the TDP in Telangana needs a leader like Chandrababu Naidu, who is able to spearhead party activities. When asked if the present leadership wasn’t up to the mark, he said, “It’s important for the present leadership to work hard and build trust among people and stand by them. The party should work as per the people’s aspirations and address their problems and gain their trust.” #KhabarLive