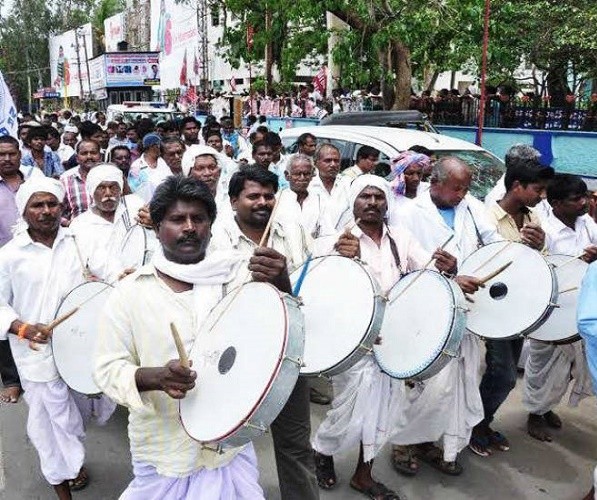 Dappu is a musical instrument and is commonly used in any procession. Some communities used Dappu on various occasions. No religious procession is complete without ‘Dappu.’ But, now Dappu is the biggest weapon in the hands of the ruling TRS to win votes in north Telangana.

According to the reports from the interiors of North Telangana, especially in Karimnagar, the ruling TRS is distributing Dappulu to the Dalit and other most backward communities. These dappus are being distributed by the party local leaders in secret meetings with the community leader. The promise is that much more would be given after the candidate wins the elections.

The TRS cadre are reportedly taking every care to ensure that these meetings are held in secret locations and are trying to keep them away from publicity glare. In these meetings, the local TRS leaders are making the community leaders pledge their support to the party candidates. The leaders are being asked to work among their respective communities for the TRS.

In the case of other communities, especially, the BCs, the party leaders are supplying professional implements like scissors and mirrors to the barbers and spanners and hammers to blacksmiths. The official candidates are taking every care not to be seen in public in the community meetings. They are prodding the second and third level workers, who operately locally, to interact with the communities.

There are reports that the party is giving up to Rs 30000 to the leaders of various caste groups to organize these meetings. The local community leaders will spend part of the money to mobilize the community members for the meeting. #KhabarLive