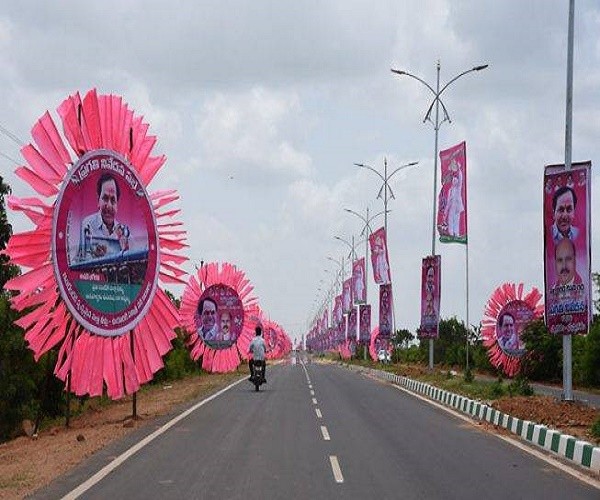 All arrangements for Pragathi Nivedana Sabha in place where party chief KCR will present his report card to people. Demonstrating its organizational skills, the Telangana Rashtra Samithi (TRS) has completed a major part of the arrangements for its Pragathi Nivedana Sabha, which is expected to draw over 25 lakh people to Kongarakalan village, venue of the meeting, on the city outskirts on September 2.

Speaking to #KhabarLive, party floor leader in the Lok Sabha, AP Jithender Reddy, after visiting the venue said this is the first time that a State government in the country is presenting its progress report without any demand from opposition parties. “We on our own are coming out with the report card, which will be presented before 25 lakh people at the venue and crores of people will watch the meeting live on TV”, he said. TRS president K Chandrashekhar Rao will present the report card in his two-hour-long speech and will give a detailed picture on his party’s contribition to the State from the days of the agitation for a separate State and grant of statehood till the current day.

On the venue and stage arrangements, he said, “though the party is expecting 25 lakh cadres to the venue we have been receiving calls from party workers expressing their interest to attend the meeting, hence the venue was ready to accommodate even more”. He said that almost the entire population, in one way or another, had benefited by the schemes launched by the State government such as Rythu Bandhu, Rythu Bhima, Kanti Velugu, pension scheme, residential schools, community development scheme, and more.

Reddy said all arrangements were ready in a sprawling area of 1,600 acres in a short period, including transport facility, parking, road connectivity, huge stage to accommodate around 500 delegates, LED lights, seating arrangements, helipads, drinking water, audio system, medical facility and more. Around 20-25 connecting roads had been developed to reach the venue beside expansion of Kongarakalan road from two-lane to four lane.

The TRS party was very eager to create a record by organizing a massive public meeting where the Chief Minister, K Chandrashekhar Rao, himself will present a four and half year report card of its rule.

“It is going to be mother of all public meetings,” Reddy said, adding that around 20,000 buses to transport party workers from various corners to Kongarakalan village, of which 6,000 buses were from RTC and the rest private transport vehicles, had been hired. Speaking to Telangana Today, MLC Ramulu Naik said tribal women had expressed great interest in attending the meeting in large numbers as the State government had fulfilled all its assurances made to them before elections, including making thandas gram panchayats.

IT Minister K T Rama Rao wanted special enclosures for women cadres attending the meeting. He also said that those arriving at the venue early in the day would be served lunch. He had a look at the parking places and suggested some modifications in the plan. The GHMC Mayor, Bonthu Rammohan, and some MLAs and MLCs also visited the venue. #KhabarLive