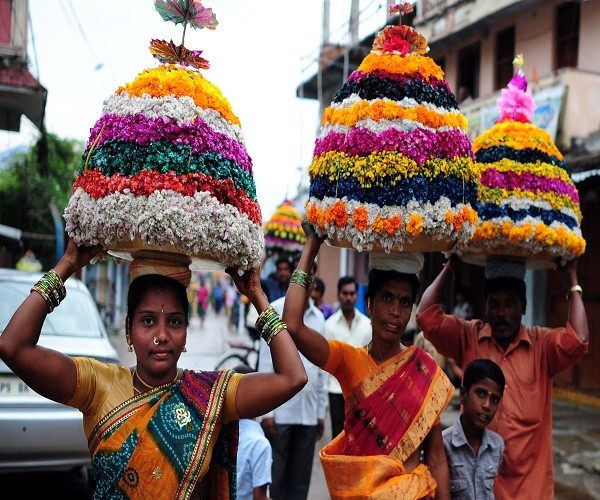 The celebration of Bathukamma has been transformed at every level in Hyderabad and across State. “There is a certain change in the way Bathukamma is celebrated. Before 2011, the flower arrangement rarely reached beyond four feet. Now it is 12 ft, 13 ft or 14 ft. Flowers that were never used are being used for creating the Bathukammas,” says Madhusudanchary, the priest at Ramalyam in Kukatpally.

This change in tradition has meant good business for flower sellers and synthetic Bathukamma-makers. “There is a lot of demand. The bigger ones are sold for ₹1,500 and ₹1,000. Political parties, hotels and offices and even some households are buying them,” says Poleti Indu, who sells larger-sized flower arrangements that require bamboo ribs for support structure.

“It’s filmy now. The women dress as if they are pulled out of television serials and movie sets. Many of them don’t even know the traditions,” says an elderly woman watching the proceedings of Bathukamma as women in festive finery carrying large flower arrangements reach the site.

Many of the women who had come to participate in the Bathukamma celebrations could not describe the rituals and traditions that are part of the event. There were wide divergence about the origin and performance of rituals. “People are using chamanti (chrysanthemums) for the flower arrangement, while only wild flowers including thangadi, gummadi, adavi chamanti and other locally-available flowers should be used,” says Venkatramana Choudhury Janardhan at Kukatpally.

In modern Bathukamma, Seethammavari jeda is fading
The symbiotic relationship and logic between ecology and traditions vanishing. Some of the ecological and environmental aspects associated with the famous Bathukamma floral festival are on the verge of extinction, thanks to changes that have focused only on the celebration.

At least some of the freely available flowers that went into the making of the Bathukamma cone and which had a role to play in agriculture have become rare even in the rural areas of Adilabad.

The bright red, velvety flower Seethammavari jeda or cockscomb (Celosia cristata), or the banthi (marigold) are typical examples. While the former grew in patches in every agriculture field year after year, marigolds were cultivated along the edges of fields. Both plants are known to be natural pest controllers.

However, with cultivation of traditional crops vanishing, many of the related traditional activities too are disappearing. Farmers do not spare even an inch of land for growing pest controlling plants, while cultivating the velvety cockscomb and the marigold commercially. The latter is cultivated in in extents much larger than that of the red flower, which is why its use in making the Boddemma cone is much lower.

Farmers who understood the environmental importance of these are now few and far between.

“Seethammavari jeda releases out pyrethroids which controlled pests in various crops. The plants were once grown in every field in a patch or two, or cultivated in backyards,” recalled former Adilabad Agriculture Officer B. Muralidhar.

Muralidhar has devoted an entire chapter to the traditional Bathukamma festival in the second and updated version of his award winning book, Nirudu Kurisina Kala.

“The colour of the Cockscomb flowers also attracted pests which sort of relieved the main crop from their attack. Mostly leaf sucking pests used to be controlled by the plant with the brilliant flowers,” he added.

Bathukamma: women give key ritual a miss
Colourful flowers have been heaped on the edge of Hussainsagar Lake near Indira Gandhi statue. A couple walk in with their children and the woman gives a beautifully-arranged flower pattern on a platter to a young man in shorts. He wades into the water and at about 10 feet from the edge of the steps, he upturns the plate and comes back to the shore. The husband fishes out a ₹50 note and gives it to the young man.

And just like that, one of the oldest traditions of Bathukamma has been quietly bid adieu. “We have to put the Bathukamma in water, but the water is dirty and I cannot go inside,” said Padmalakshmi, the housewife, who said she has been following the tradition from childhood at her native place Warangal.

“Tradition demands that we immerse the ammavaru in the water on the ninth day and recite the lines ending with Ravama Gouramma, Malli ravamma ma intiki promising the goddess that she will be taken care of when she returns next year. But now the water is so polluted in Kukatpally lake that we are just putting it in water without touching it. Most women are not touching the water of the lakes or ponds as it is dirty,” says Venkatramana Choudhury Janardhan, who has come for the communal Batukkamma near Kukatpally Ramalayam, one of the places in the city where the celebration is in a different league altogether.

A few kilometres away is the specially-created Bathukamma Ghat near Tank Bund where women from the nearby areas come to play Bathukamma. By 6.30 p.m. during Dasara, women dressed in festive colours reach the manicured lawns and begin playing Bathukamma singing songs, standing shoulder to shoulder and clapping. The water has the off-putting dark green colour of a toxic broth. Here too, the women release the flower arrangement near the fringe carefully, avoiding contact with water.

Festival grant
While the Telangana government has declared Bathukamma a state festival granting ₹20 crore for its celebrations, the foul quality of water in most city lakes and ponds has robbed the festival of its key tradition. “Women have to release the flowers in the water and pray that their lives are not troubled. On the ninth day, they release Talli Gouramma in water and bring back the Pilla Gouramma home,” said Mr. Venkatramana, referring to the break from tradition.

Data from Telangana State Pollution Control Board shows that the green toxic broth of the Hussainsagar has only worsened over the past two decades. The key parameters like Biological Oxygen Demand (BOD), Dissolved Oxygen (DO), sulphats, and total hardness have deteriorated over the past 18 years.

While the tabulated annual averages show the difference, the annual detailed analysis during Ganesha festival before and after the immersion of idols shows the havoc wrought on the lake. “The BOD, which is an indicator of organic pollution, spikes during the Ganesha festival. All our monitoring stations are now recording very high levels of pollution,” said an official of TSPCB.

Ironically, with the immersion of large quantities of flowers and other puja offerings, the BOD of Hussainsagar is likely to deteriorate further.#KhabarLive