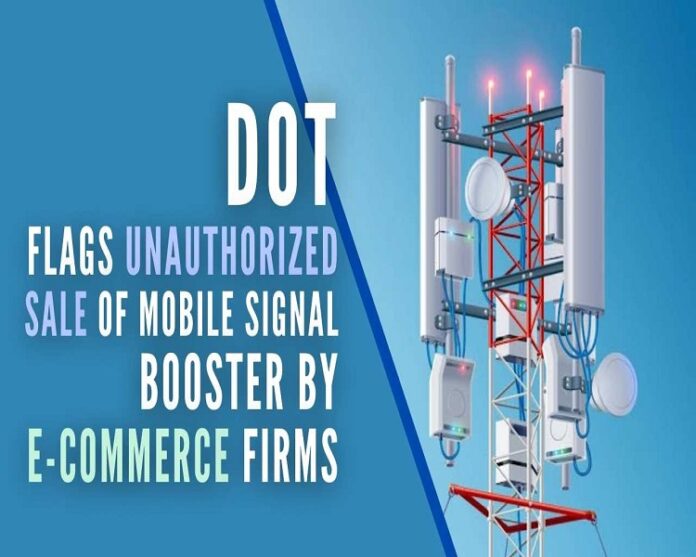 The Department of Telecom (DoT) wrote to the Customs department flagging unauthorized sales of Mobile Signal Boosters by e-commerce firms and sought strict implementation of import rules to curb such practices.

The telecom department in a letter to the Chief Commissioner of Customs and Central Board of Indirect Taxes and Customs (CBIC) chairman said that it has come to its notice and has also been reported by the Intelligence Bureau about certain models of walkie-talkie sets available for sale on some e-commerce platforms without any compliance to the regulatory requirement of the department. The mobile signal booster and walkie-talkie sets fall under the category of transmission apparatus incorporating reception apparatus which are not permitted to be imported without a license.

The wireless technology monitoring group of the DoT brought down 140 illegal mobile signal boosters during a week-long raid in the state capital.

“While the department is continuing to take appropriate action in this regard in cases of violation, but to restrict the inflow of such unauthorized wireless equipment including mobile signal booster/ repeater in the country, it is requested to strictly enforce the provisions enshrined in the import policy of DGFT in this regard,” the letter said.

The unauthorized mobile signal repeaters and walkie-talkies can help anti-social elements set up illegal communication infrastructure. Most people also use this equipment to boost mobile signals in their premises which adversely impacts telecom networks in surrounding areas resulting in call drops, poor call quality, etc. Most of this equipment are illegally imported from China, Taiwan, South Korea, Singapore, and Malaysia.

“Further, notice has also been served to various e-commerce platforms to refrain themselves from selling/ facilitating the selling of unauthorized wireless equipment including signal repeaters/ boosters. Few of such e-commerce platforms have complied with the instructions.

However, such unauthorized wireless equipment including mobile signal repeaters/ boosters are still available for sale on some of the e-commerce platforms and in the grey market,” the letter said. #KhabarLive #hydnews