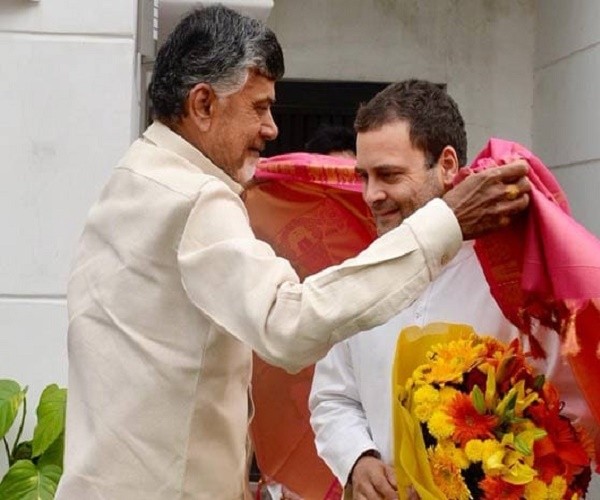 The Telugu Desam Party’s (TDP) latest political campaign, a crusade against the BJP for democracy and justice, is interesting. The party says that the nation is in danger of losing its democratic system because of the BJP government. Its chief is trying to connect with all political parties in the country for a grand alliance with the Congress as its major partner.

He has already cobbled up a sample of it in Telangana as ‘Mahakutami’ with four parties. Though its numbers in the Mahakutami is low, the TDP appears to be the main force driving it from behind the scenes.

It is not new for the TDP to stitch political fronts against a national party before elections. But it used to be usually against the Congress. This time, it is with the Congress, and against the BJP, its NDA ally in the last election as well as in power sharing for about four years. The reason for making and breaking alliances for it are many. The major criterion is making up the requisite percentage of votes to win elections in the State and be on the right side to or in the ruling power dispensation at the Centre. And this has nothing much to do with ideology.

Going Overboard
This time, the TDP’s political antics in the NDA were little too much. In the immediate aftermath of State division, Modi’s lackadaisical attitude towards Telangana and the influence of M Venkaiah Nadu had created an unusually hyper bonhomie between the two parties.

The BJP, even though there was no need to share power with the TDP, provided berths in its Cabinet. Modi unwittingly allowed wily Chandrababu Naidu to upstage him. He allowed the dumping of UPA’s capital committee report, supported the bizarre world-class city idea and gave him a free hand to canvass for it all over the world. He even promised facetiously to honour Special Category Status (SCS), which was promised under duress by the Congress in Parliament.

As the much expected foreign direct investment did not materialise and the revenue deficit Budget of AP did not support its grandiose plans, it has turned back on to its ally to demand that it fulfils its impracticable promises. The Modi government to its chagrin found out that the AP government was misusing the funds given to it as part of the AP Reorganisation Act and also it is not in a position to fulfil its off the cuff promises on the SCS and world-class city.

Bitter Enemies
Venkaiah Naidu was made the Vice President. The disbursal of central funds to AP have slowed down. The break came and the BJP and the TDP became bitter enemies and the war of political attrition has started. Because of the on-performance of the TDP, its graph in the State has fallen drastically. The percentage of BJP and Pawan Kalyan votes is no more there, which brought the TDP into power with a wafer-thin majority.

So, the TDP needs another front to make up the lost percentages. There was no other alternative except joining hands with the Congress and drumming up support for it all over India. That is the reason for the ‘Mahakutami’ and its trial run in TS elections. It is named as a front for democracy and justice, a new political excuse for its hunt for power. Whatever be the idiosyncrasies of the BJP government, the TDP challenging it on the grounds of democracy and justice sounds strange. The track record of democracy and justice in the TDP earlier in general and this time, in particular, makes its slogan very curious.

Open Secret
It is an open secret that the TDP is the sole proprietorship company of Chandrababu Naidu. All things that happen in it are at his pleasure only. He runs the State’s Assembly and the Secretariat as its sole proprietor or CEO, as he calls himself. The way the Assembly and the State is run by him is the testimony. Assembly is like his fiefdom and the opposition is not allowed to say anything.

All Bills are prepared at his pleasure and no meaningful discussion is allowed. This is why the main opposition party abandoned Assembly and is on ‘padayatra’ all over the State instead of attending Assembly. They have been made redundant by the TDP. The CM’s son is nominated as MLC and made a minister without any compunction, with scant regard for propriety.

Nothing seems to happen in the State without the nod of its CM or his son. The State’s Budget and its finances are in the doldrums. All its important projects are bogged down in the mire. The law and order is known for its low functioning.

The death of 29 people in a stampede during the Godavari pushkaram is not probed properly and no action is taken. There are several cases of corruption and women-related violence. Even criminal cases are appeared to be settled politically outside the purview of law forcibly. Two senior political leaders were killed by Maoists in daylight in the State.

There was a murder attempt on the opposition leader at Visakhapatnam airport. The opposition leader does not want State police to probe his case and petitioned the court to hand over the case to a non-State agency. There were I-T and ED raids on many VIPs connected to the government in the State.

To top it all, the State government issues a GO withdrawing the general permission to the CBI to deal with State cases. In such a situation in the State, the TDP chief trying to cobble up a national front against the BJP for saving democracy and justice appears very farcical and preposterous.#KhabarLive