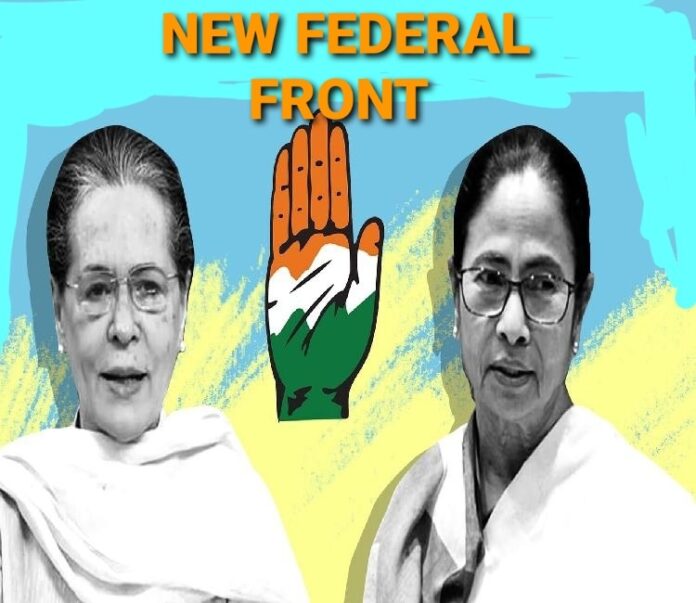 It is evident that ruling TRS in Telangana and ruling YSRCP in Andhra Pradesh are not interested to support Congress-led front managed by multiple parties against ruling BJP to act as a united front to combat in national politics.

Although West Bengal Chief Minister Mamata Banerjee may be having a lot of hopes that the Telangana Rashtra Samiti and the YSR Congress would join the proposed front to take on the Bharatiya Janata Party in the next General Election, it appears that the ruling parties in the Telugu states, which follow separate routes in national politics, may prefer to maintain equidistance from the saffron party and the grand old party.

During the previous Lok Sabha elections, Telangana Chief Minister K Chandrasekhar Rao did make efforts to form a Federal Front against the BJP and the Congress. Now Mamata Banerjee has initiated steps to form a front against the BJP. The other day Didi, as Mamata Banerjee is endearingly called, told the media that Andhra Pradesh Chief Minister YS Jagan Mohan Reddy was like her brother and that she would speak to him about the need for him to join the front proposed against the BJP.

Since Telangana Chief Minister K Chandrasekhar Rao had met Mamata Banerjee twice and discussed the formation of the Federal Front, Didi has high hopes on KCR joining the front. But the main problem for both YSRCP and TRS is that the Congress is likely to have a role in the front.

In Telangana, Congress is the main opposition party. In Andhra Pradesh, the YSR Congress will never join hands with the Congress at any cost. For, it believes that the erstwhile Congress-led government had harassed YS Jagan by foisting cases and colluding with TDP, and sent him to jail also.

Besides, Sonia Gandhi should tender unconditional apology to YS Jagan openly. The YSR Congress leader said if Sonia Gandhi accepted these conditions, then YSR Congress would support the front in which Congress has a role.

ALSO READ:  How The 'Seva Mitra' Igniting Sparks Between Andhra Pradesh And Telangana?

As for Telangana, KCR also may not support the front with Congress. Because TRS has to fight with the Congress in the state and joining hands with the same party at Centre was not possible, said a TRS leader.

At present, TRS and YSR Congress are openly saying that they have been maintaining equal distance from BJP and Congress at the national level. Both the parties are, however, extending indirect support to the Centre whenever it needs. The national BJP leadership is also confident that YSR Congress and TRS will not support the Congress to form a government at Centre.

In this backdrop, Didi will have a tough time stitching up a front that has the ruling parties in Telugu states on board. #KhabarLive #hydnews