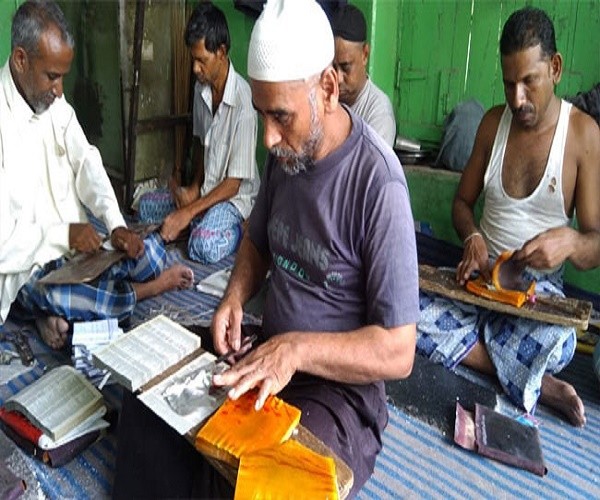 The rhythmic tong-tong of the hammer and the scene of groups of men beating sheets of plastic on the Charminar-Shah Ali Banda stretch will soon become history, owing to decreasing number of orders. Deep in thought, 55-year-old Noor Mohammed, born and brought up in Hyderabad, sits at his warq shop abutting the historic Mecca Masjid.

“We are into this business for almost a century. I took it over from my father and planned to make it more lucrative. But now, machines are replacing humans everywhere,” says Noor Mohammed, a second generation warq maker.

The silver foil is made of small pieces of silver. The material is kept in a book made of plastic sheet and hammered till it takes the shape of tin foil. Using papers, the silver foils are removed and sold in the market to businessmen.

There were around 50 small units in the city a few decades ago. But owing to the veg and non-veg issues big machines which can easily make large quantities of silver foil have been introduced in some cities like Noida and Delhi and the product is much cheaper. “It would not be wrong to say that the industry has crumbled down,” explains Abdul Jaleel Khan of Deccan Warq shop owner at Shah Ali Banda.

The workers at the local industry make three varieties of foils, aluminum, silver and gold. Aluminium warq is applied on silk clothes, fruits and meat, the silver for decorating sweet packs, delicacies and used by hakeems for wrapping medicine. Nevertheless, the gold one which is costliest of all is made to order. A set of 70 aluminium sheets is sold for Rs. 50, while the silver foil is sold for Rs. 150.

“It is pure silver – 99 per cent. You can get it tested anywhere,” challenges Mohd Akbar, a worker at UTC Warq shop at Charminar.

After a tiring day, the workers are paid Rs. 400 for an eight-hour shift, while for 12 hours they are paid Rs. 500. Now there are just around 1o warq shops in the city. “Around 80 to 100 workers move around between these shops in the city, while shops prefer do the job at their houses and supply it at the shops,” says Mohd Osman, who is into the vocation for the last 35 years.

Only a handful of workers are now continuing with the trade. “It is a tough job and takes a toll on health when one crosses the age of 40. It is purely a hand to mouth profession with little savings, so the present generation is not at all interested in getting into it,” he adds.

Over the last few years, the trade has dwindled. One, because of the changing lifestyles and the other following the ‘rumours’ of use of cow hide during the process of transforming the silver particles into foils. “There are rumours that we use the intestine of cow or bull made sheet to keep the silver and then hammer it,” says Akbar.

But, this is not correct. Following such rumours years ago, we had switched to the German plastic sheet which is used in machines also. “The sheet is strong enough to withstand hammering for long hours. Generally, it takes around two hours to shape the silver particles into foils and almost all the warq shops are using the German plastic sheet,” he explains. #KhabarLive