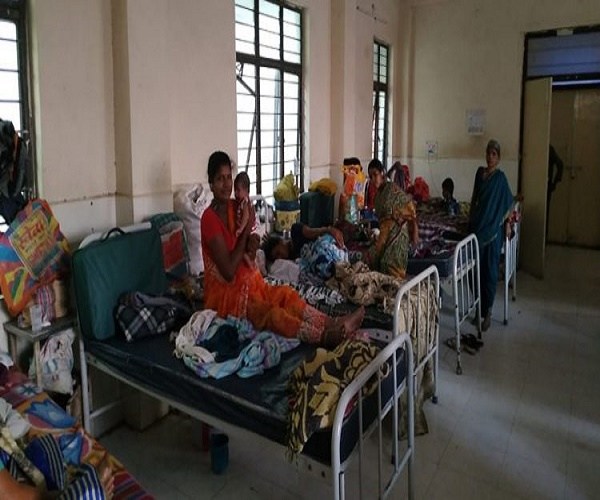 Implementation of first of its kind – KCR Kits – and a slew of initiatives to improve medical services in government hospitals are yielding positive results. Nirmal District Headquarters Hospital in Telangana achieved a rare feat by registering 21 deliveries on a single day, surpassing the previous record, thanks to better quality service and the novel scheme.

The authorities of the hospital were excited to witness the maximum number of deliveries at the facility, which was registering around eight per day. This phenomenal success can be attributed to the KCR Kits and availability of gynecologists, radiologists, anesthesia technicians, besides many other amenities.

Nirmal Headquarters Hospital Medical Superintendent Dr B Suresh told #KhabarLive that the hospital saw 21 deliveries on Tuesday, the highest number in its history. Of them, 11 were C-sections and 10 were normal deliveries. The facility had recorded the maximum number of deliveries registered by 16. It registers somewhere between 250 and 300 deliveries in a month and is gradually witnessing a spurt in the maternity service.

The Superintendent reasoned introduction of KCR Kits, presence of doctors, and improved services for the rise. Awareness was created among the public over the facilities. Pregnant woman belonging to several parts of the district and Neradigonda mandal of neighboring Adilabad district would throng the hospital for a smooth delivery. We could win the trust of the patients over a period of time, with the help of the scheme and quality services, he added.

With seeing remarkable growth in institutional deliveries, authorities of the hospital submitted a proposal for constructing a dedicated mother and child hospital (MCH) for the convenience of the pregnant women and new mothers. Collector M Prashanthi allotted five acres of land for erecting the building, costing Rs 20 crore. The works of the new facility would be commenced once the funds are released, explained Suresh.

Already, Mancherial District Headquarters Hospital has become a most-sought after destination for pregnant women belonging to not only this district but also neighbouring Kumram Bheem Asifabad for maternity services. Steps are being taken to better medical services and to appoint doctors at the similar facility of Kumram Bheem Asifabad district. #KhabarLive

ALSO READ:  How The 'Future Of Gyms' May Look Like In Hyderabad?