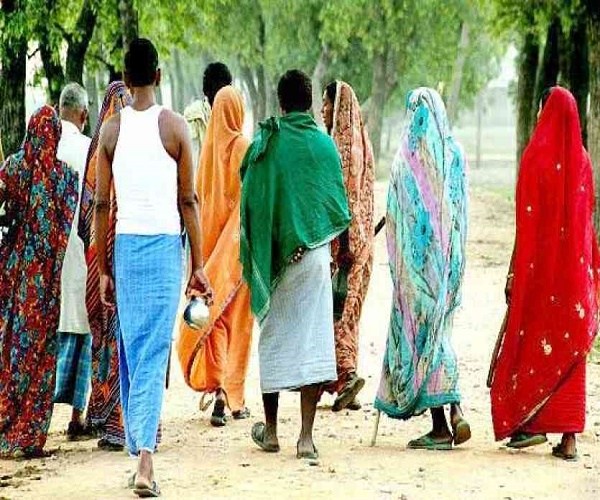 Prime minister Narendra Modi launched Swachh Bharat Mission on Oct. 02, 2014, by wielding a broom on the streets of Delhi. The programme, which has Mahatma Gandhi’s iconic spectacles as its logo, is one of the most hyped schemes of the Modi government. Its primary goal is to make India open defecation-free by Oct. 02, 2019, through the construction of at least 12 crore toilets across rural and urban households.

Open defecation-free (ODF) is broadly defined by the absence of visible faeces in the environment. India has the highest open defecation rates in the world, a problem that comes with severe public health consequences including high levels of child malnutrition.

As of Feb. 01, 2019, the Modi government claimed to have constructed 9.2 crore toilets. It declared 5.5 lakh villages and 28 of India’s 36 states and union territories had become open defecation-free.

The Research Institute for Compassionate Economics surveyed 3,235 households in four states in north India in 2014 and 2018. It found open defecation had reduced by 26 percentage points in the four years since Swachh Bharat was launched, with access to household toilets shooting up from 37% in 2014 to 71% in 2018.

But access to toilets does not mean open defecation has ended, as the government claims. The RICE survey found 23% of people who own a toilet continue to defecate in the open, including people in Rajasthan and Madhya Pradesh, which have been declared open defecation-free states.

What is the government’s strategy?
To achieve its goals under the Swachh Bharat Mission, the government outlined a three-pronged strategy: using social messaging, education, and communication to trigger behaviour change, providing subsidies to vulnerable social groups to help them construct latrines at home, verifying and monitoring the continued use of these latrines through surveys and social audits.

What has the government focused on?
In the four years since it was rolled out, the Mission has focused almost entirely on toilet construction and ownership. This is reflected in the allocations made under the programme.

In the urban component of Swachh Bharat, toilet construction was meant to take up 33% of the budgetary allocation, while 50% was allocated towards improving solid waste management.

However, in the past four years, the Centre has sanctioned 51% of its share of the urban budget towards toilet construction, and only 38% towards solid waste management.

How has this worked on the ground?
For a basic twin-pit household latrine constructed under the Mission, the government provides Rs12,000. The Centre contributes Rs7,200 while the rest is paid by state governments.

In many cases, however, toilets have been constructed through coercion and threats, with district officials under pressure to meet the Mission’s targets. This report, for instance, reveals that households in several Rajasthan villages were forced to build toilets under pressure from panchayat (village council) officials who threatened to cut off their welfare benefits if they did not comply. In other apparently open defecation-free villages in Rajasthan, many lower-caste and low-income households had been simply struck off government records if they could not afford to build latrines.

The 2018 survey by the Research Institute for Compassionate Economics also found that Dalit and Adivasi households in north India faced high rates of threats, harassment and coercion by government officials trying to implement the Swachh Bharat Mission.

What have the outcomes been?
In its National Annual Rural Sanitation Survey 2017-18 (NARSS), the government claimed 77% rural households had access to toilets, of which 93.4% used them regularly. It also claimed 95.6% of the surveyed villages that had been declared ODF were indeed free of open defecation.

How accurate are these figures?
There is a difference between figures on open defecation found in NARSS and in the National Family Health Survey-4, which collected data in 2015-16.

NFHS surveyors found that more than half of rural households defecated in the open. Even in states and districts which had been declared ODF by then, the surveyors found high levels of open defecation.

More recently, in mid-2018, the Research Institute for Compassionate Economics surveyed 9,812 people in rural north India and found open defecation rates of 53% in Rajasthan and 25% in Madhya Pradesh, both states that have officially been declared open defecation-free under the Mission. Even among latrine owners, open defecation remained common:

What explains the data discrepancy?
For one, the government based its Swachh Bharat targets on a 2012 baseline survey of the number of rural households without toilets. This led to the exclusion of several new households that have emerged over the years as families expanded.

Second, the government has been making ODF declarations on the basis of latrine ownership rather than actual latrine use. According to researchers Payal Hathi and Nikhil Srivastav, NARSS surveyors were under pressure to get data matching the Ministry of Drinking Water and Sanitation’s data on toilet construction.

Another problem with NARSS is the sample size: a total of just 15 households each in just 6,136 villages across India were surveyed, of which 1,259 had been declared ODF by the government. Based on this sample, NARSS confirmed the ODF status of 95.6% of the 1,259 villages.

Regular toilet use data in NARSS (93.4%) is also questionable. Centre for Science and Environment did a survey in 2017 in Bihar and Uttar Pradesh, and found that regular use was low because many toilets did not have water connections, or the twin-pit toilets were designed poorly.

Latrines are often turned into storage sheds, or construction of pit latrines is not completed. This has been an old problem since the 1980s, when the Central Rural Sanitation Programme offered subsidies for building household toilets.

What about official verification drives?
According to the guidelines, once a village achieves 100% toilet construction, states need to conduct verification surveys twice: first three months after the declaration of ODF status, and then another six months after that.

The Centre is also expected to carry out an annual nationwide third-party verification, but this was not done until NARSS 2017-18, more than three years into the Mission. Because of this, the World Bank did not release the $1.5 billion loan it had committed towards Swachh Bharat in 2015.

The Swachh Bharat guidelines list geo-tagging of toilets as a means of verification, but this report indicates that only 30,000 out of 6 million toilets built can be seen on Google maps.

How have awareness campaigns fared?
Triggering behavioural change through “Information, Education and Communication” is one of the key components of Swachh Bharat. The Mission has been given the highest advertising and promotion budget from the Centre compared to other schemes.

But there is some debate over the utilisation of funds for IEC. Eight percent of the total Swachh Bharat budget allocation is supposed to go towards IEC. But in 2017-18, states spent only 1.8% of the centre’s share of Rs 10,678 crore allocated to IEC.

Most of those funds have been directed towards media publicity on radio, TV or in print, rather than on grassroots-level awareness campaigns.

What is the impact on solid waste management?
India generates over 150,000 tonnes of municipal solid waste per day. Only 83% of waste is collected and less than 30% is treated. As noted above, the government has chosen to prioritise toilet construction at the cost of waste management services.

Even though the budget for waste management has increased over the years, in the last quarter of financial year 2016-17, at least 23 states/union territories were yet to receive that year’s funds for it.

According to this report from 2017, of the budget set for solid waste management, only 28.8% of the funds were released in the first three years of the Mission. Not surprisingly, waste processing rates increasedfrom 16% in 2014 to just 22% in 2017.

However, lives of manual scavengers across Indian cities do not seem to have changed much in the four years of SBM. For example, this investigation by The Caravan magazine found that in districts like Ahmedabad, open defecation and manual scavenging was widely prevalent even though the district had been declared 100% ODF. #KhabarLive