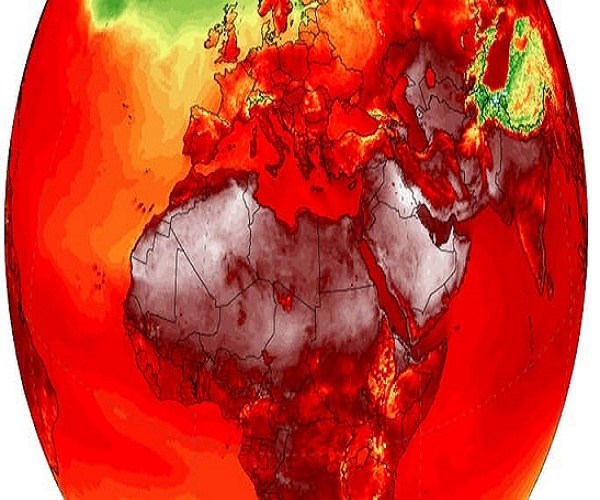 A study published this week in the journal Earth’s Future concludes that this heat wave epidemic “would not have occurred without human-induced climate change.”

The alarming part? There are signs record-setting heat waves are beginning anew this summer – signaling, perhaps, that these exceptional and widespread heat spells are now the norm.

In the past few days, blistering, abnormal heat has afflicted several parts of the Northern Hemisphere, including major population centers.

New Delhi, India’s capital, soared to 118.4 degrees (48 Celsius) Monday, its highest temperature ever recorded in June. Some parts of India have seen the mercury eclipse 122 degrees (50 Celsius) in recent days, not far off the country’s all-time high.

On the other side of the hemisphere, the temperature in San Francisco shot up to 100 degrees (37.8 Celsius) Monday, its highest temperatures ever recorded in the months of June, July or August, or this early in the calendar year.

Heat spread unusually far north, even up into the northern reaches of Scandinavia. Mika Rantanen, a meteorologist at the University of Helsinki, tweeted last Friday that there “are no known cases in Finland’s climate history when it has been hotter than now so early in the summer.”

Temperatures above 86 degrees (30 Celsius) penetrated inside the Arctic Circle, he noted.

A heat wave in Japan at the end of the May set scores of records, including the country’s highest temperature ever recorded in the month (103.1 degrees, or 39.5 Celsius). The oppressive conditions were blamed for five deaths and nearly 600 hospitalizations.

While some scientists hesitate to attribute individual heat spells to climate change, Daniel Swain, a climate scientist at the University of California at Los Angeles, tweeted that his research suggests that we’ve “reached the point where a majority (perhaps a vast majority) of unprecedented extreme heat events globally have a detectable human influence.”

Last summer, exceptional heat affected 22 percent of the populated and agricultural areas of the Northern Hemisphere between the months of May and July, the Earth’s Future study said.

The contiguous United States witnessed its hottest May on record, California endured its hottest July and numerous European cities notched their highest temperatures ever recorded, while cities in Asia, the Middle East and Africa also established new heat milestones.

It remains to be seen whether heat waves this summer become as pervasive and intense as last summer. That said, the Earth’s Future study concluded we’ve entered “a new climate regime,” featuring “extraordinary” heat waves on a scale and ferocity not seen before.

The study’s modeling analysis, conducted by researchers in Switzerland and the United Kingdom, found heat events like last summer’s do “not occur in historical simulations” and “were unprecedented prior to 2010.”

As the climate warms, the study projects that the area affected by heat waves like last summer’s will increase 16 percent for every 1.8 degrees (1 Celsius) of warming.
“Heat waves will likely reach highly dangerous levels for ecosystems and societies over the coming decades,” the study said.

Heat events like those last summer are predicted to occur two every three years for global warming of 2.7 degrees (1.5 Celsius) and every year for warming of 3.6 degrees (2 Celsius).

So far, Earth has warmed by approximately 1.9 degrees (1.05 Celsius) since 1880. The goal of the Paris agreement on climate change is keep the global temperature rise to 3.6 degrees (2 Celsius) or less.

Last week, a study in the journal Science Advances found that keeping warming to 2.7 degrees (1.5 Celsius), compared with 5.4 degrees (3 Celsius), could avoid between 110 and 2,720 heat-related deaths annually in 15 different US cities.