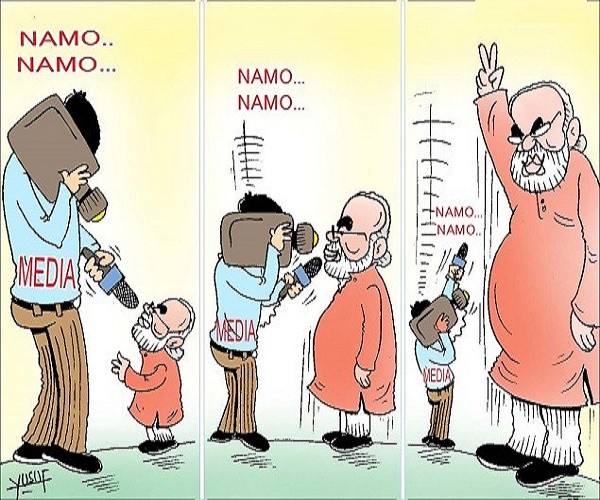 The media can disagree, fight and judge each other. But it can survive and thrive only by closing ranks when its first principles are under attack. Over the past 50 years, India has seen three powerful full-term prime ministers with majorities. The first was Indira Gandhi after her March 1971 sweep. The second, Rajiv Gandhi in 1984. We have the third such, under Narendra Modi, about to step into its fifth year.

Think about the one thing you can find in common between these three governments. Let me drop some “phone-a-friend” type hints. Think of what each of these tried in the last year of its term. Still guessing? Here is a second hint. Think like a journalist.

Fact: Each of these targeted the media in its last year. Indira Gandhi brought the censorship exactly as her fifth year began (she later extended the term of that parliament by a year to gift herself a six-year term). Her argument was, the press was spreading negativity and cynicism, was controlled by vested interests and beholden to a “foreign hand” out to destabilise India.

Rajiv Gandhi brought in the so-called anti-defamation bill as he entered his last year. He was beleaguered with Bofors, Zail Singh’s challenge, V.P. Singh’s rebellion and more, and blamed the press. He failed too.

Now, the Modi government made a move on mainstream media on the pretext of fighting “fake news”. It was withdrawn as dramatically as it had been announced. The government isn’t done yet. The withdrawn press release was followed, as if on cue, by the constitution of a committee to frame governance norms for digital media. The argument being that both print and broadcast have their regulators (the Press Council of India and News Broadcasting Standards Authority, respectively) but the pesky new digital media has none. It cannot be allowed to function in an autonomous vacuum.

Among the oldest principles in journalism is the “three-example rule”. If you can find three facts making the same point, it completes a straight-line thread. We can, therefore, conclude that something happens to really powerful governments in the last year of their term that makes them want to shoot the messenger. Why, is a different debate altogether, for another day. Although, they possibly just can’t handle their rising insecurity about the next term they had taken for granted.

We know by the time 1975 began, Indira was on decline with 20 per cent-plus inflation and Jayaprakash Narayan’s movement. We will be delusional to believe that voters punished her for press censorship. If she hadn’t blundered into forced sterilisation, the “discipline” of the Emergency was quite popular. But, after her defeat and the rise of the rivals she had jailed, a social contract evolved whereby public opinion acknowledged the monstrosity of censorship and built a stake in press freedom. In a country with no specific laws guaranteeing press freedoms, this was a landmark shift. A Supreme Court, contrite over its complicity with the Emergency, also gave this social contract a judicial spine over the decades. Indira Gandhi’s big play to control the press, became counter-productive.

Rajiv too tried shifting the blame on the media for his decline and like his mother’s, his move boomeranged too. Top Indian editors and even owners forgot their rivalries and turned out with placards in a protest on Rajpath, displaying a solidarity missing during the Emergency. Rajiv retreated, but in the process, India had seen—and come to admire—the media’s new solidarity, and commitment to its freedoms.

Each of these big attempts by powerful, full-majority governments to strangle the media actually ended up strengthening its freedoms instead. Will this happen again this time? Will a new three-example rule come into play, proving that an angry government will always fail to throttle the media?

The BJP government has several challenges as it enters its last year. But it is nothing yet compared to the existential threats the earlier two were facing. Indian media is enormously bigger, more powerful, popular, richer and diverse now. But there are a couple of strong negatives today. One, that the social contract we talked about is fraying, something I have fretted about in the past. The second that the media is now more divided. It always had divisions of ideologies and views—as it must in a decent democracy. Today, it is also divided on the basis of platforms. That provides the cracks in which a determined establishment can bury the hatchet. These are the cracks the government is probing by running a fine knife over them. The big blow will inevitably come, once they widen.

Read between the lines when the government says print and broadcast have their governance systems, but digital doesn’t. The idea is to salami-slice the media community. How this will work, or perhaps won’t, is worth debating. First, the legacy media houses, including the many that operate on all three platforms: print, broadcast and digital, might think it doesn’t bother them as they are fenced in by their own respective “systems”. So let the digital upstarts get their comeuppance. It will be tempting, as many in the powerful legacy media are seething at what they (somewhat with justification) see as an effort by the new digital players to lampoon them as trivial, corrupt, incompetent and compromised.

Conversely, many new-digital players believe the internet is impossible to regulate, so just tell the government where to get off. It doesn’t work like that in the real world. A government can simply issue a notification and bring in some equivalent of licensing and worse. The internet is not a sovereign republic and the global mood today, especially in the deeply liberal community, is to regulate it. When that happens, remember, you won’t be able to fight it alone. You will need the same legacy media that some so detest and undermine. And the vice versa is true as well, the entrenched institutions’ contempt for these “arrogant pretenders with no revenue models” will be self-defeating too.

ALSO READ:  A Khadi Office Opened By Gandhi In 1925 Is Dying, Much Like His Legacy

This was a week dominated by terrible tales of injustice, as far apart as Kathua in Jammu and Kashmir and Unnao in the heart of Uttar Pradesh. The arrogance of the political establishment in both places was blocking justice. It is mainly because of the stellar work done by the media, on all platforms, that turned the tide. When the chips are down, you need them all. There is no mainstream, downstream, slipstream distinction—or apartheid.

We will disagree, fight and often judge each other. We journalists are like that only (sorry, Deve Gowda, for stealing your metaphor). When press freedoms are under assault isn’t one of those occasions. The equation is brutal. You either fight together, to protect the freedoms of all, or be salami-sliced and perish. So don’t judge the other now, however much you may detest their journalism. You can only preserve your freedoms if you fight even for those of your rivals or ideological antagonists.

I speak as one who was a journalism student during the Emergency, have been-there-done-that in the widest sense of the term, and now work simultaneously in all three dimensions. This column also appears on the morning the Editors Guild of India has its Annual General Meeting (AGM). I’ve been among the many guilty of committing inadequate time to the Guild, seeing it as a waste. I was arrogantly dismissive and wrong.

We journalists need to strengthen all our institutions, the old and the new. This is a time for mutual respect amongst all of us, and solidarity to defend our first principles, irrespective of how and where we tell our story and what our drift. Because, remember, freedoms can’t be salami-sliced. #KhabarLive