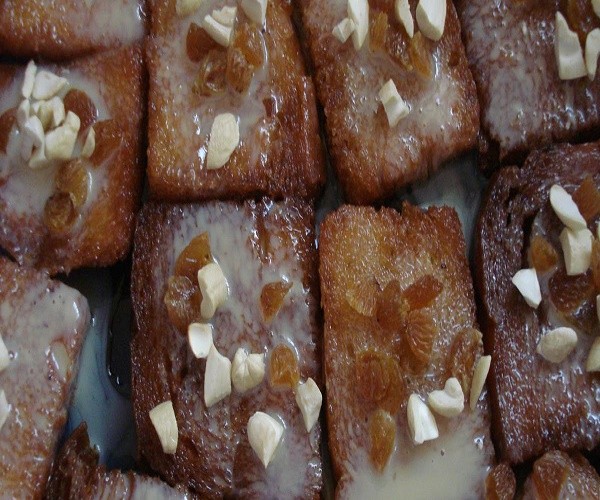 Across the country, bread is used imaginatively and prolifically to drum up a range of quintessentially desi treats, some of them iconic. At the risk of being permanently banned from the league of serious gastronomes, I shall go ahead and admit this – I swear by good old white bread.

Few things, for me, can match the delight of crunching into a crisp toast slathered with salted butter. Except perhaps, biting into a crisp toast topped with a thick layer of fresh malai and a liberal sprinkling of crunchy sugar. When it comes to such unpretentious, comfort-laden treats, fancy breads simply don’t cut it. Besides, when I was growing up, white bread was the only kind that was readily available.

We bought ours from the neighbourhood grocery store that stocked bread from the trusted Anchor and Modern Bakeries. For the better part of my childhood, there was no fancy toaster in our old-fashioned kitchen with its soot-stained walls and built-in, charcoal-fuelled unan (clay hearth), which catered to our large joint family. Bread would be toasted on the tava just like chapattis, until one evening when my uncle walked in with a fine-looking Morphy Richards pop-up toaster, dark red in colour. The next morning was peppered with the continuous sound of toasts popping up.

My grandfather often insisted on a frugal dudh-pauruti dinner – crisp, golden brown pieces of toast (preferably slightly burnt at the edges for a smoky taste), broken up in pieces and served in a bowl of warm, sweetened milk. At times, my grandmother would sweeten the milk with gurer batasha (candy discs made of molasses) or nakuldana (tiny balls of crushed sugar), instead of sugar. Come winter, she would even add some date palm jaggery. I later wondered if she had been inspired by writer-poet Sukumar Ray’s words. In his collection of poems and rhymes Abol Tabol, Ray wrote, “Kintu shobar chaite bhalo/pauruti aar jhola gur (But the best of them all/Is bread and runny jaggery).” He was certainly not wrong.

Occasionally bread was put to more elaborate and delicious uses at home. My personal favourite was the bread roll – the deep fried desi version stuffed with spicy mashed potatoes, not to be confused with boring dinner rolls. My aunt made some of the best bread rolls and still does. Sometimes, she would enliven the stuffing by adding leftover keema (curried minced meat) to the potatoes, along with some finely chopped green chillies and fresh coriander.

Bread rolls would usually come with a bonus. The trimmed-off edges would later be fried in ghee and dunked in a cardamom-scented syrup to make a simple, quick-fix sweet dish. This would be served by the bowlfuls as an evening snack, sometimes with a small splash of sweetened condensed milk. Steeped in homely comfort, the dish was like a poor cousin of the Shahi Tukda or its Hyderabadi counterpart Double Ka Meetha, which is made with deep-fried bread, soaked in syrup, doused in thick, sweet milk, flavoured with saffron, and served with a topping of dried fruits and nuts. These luxurious desserts are easily among the most flamboyant makeovers ordinary white bread has received.

ALSO READ:  Is Meatless Meat Good For Your Health?

Western-style yeast-raised bread was a colonial import to the country. While the Portuguese colonisers’ attempt at recreating the oven-baked bread from back home gave Goa its pao, the English perhaps popularised plain white bread. Over the years bread has become indispensable to the Indian pantry. Across the country it is used imaginatively and prolifically to drum up a range of quintessentially desi treats, some of them iconic.

While it is true that regular white bread doesn’t have much to offer in terms of taste or flavour, that’s exactly what makes it a remarkably versatile ingredient to work with. It can soak up any flavour, adopt any accent and its texture can be easily manipulated. Besides, in India, unlike the West, the flavour and texture of the bread itself has never really been in focus until recently. It has been more of a vehicle – for flavours, or stuffing and a convenient side (thanks to its sponge-like quality) to mop up gravies with.

Bread is also at the heart of some serious culinary jugaad. For instance, the already-fermented bread comes handy in making instant versions of several traditional dishes – everything from idli, dosa and vada to dhokla and unniyappam – that would originally need to be fermented.

My maternal grandmother sometimes made delicious pantua (gulab jamun’s distant Bengali cousin) out of white bread. She would soak slices of slightly stale bread in little milk, crumble them and knead into a soft dough. Then she would make small balls out of the dough, placing a pinch of khoya and a cardamom seed or two at the centre of each ball, and deep fry them before dropping them in cardamom-scented syrup.

In Punjabi homes, says food blogger Vernika Awal, bread is used to make a rich ghee-laced halwa loaded with dry fruits and nuts. “It takes very little time to make, and is reminiscent of atte ka halwa,” said Awal. According to her, this halwa was perhaps born in the refugee camps during Partition. “During festivals and celebrations, people in the camps would trump up some festive dish with whatever they found at hand,” she said. “Bread, though not as popular in Punjabi homes back then, would be put to use too.” Rich and sinful, bread halwa is made in other parts of the country as well, and some people see it as desi-fication of the English-style bread pudding.

ALSO READ:  The 'Grey Truth' About Your 'Gray Hair'!

Then there are sandwiches with distinct desi accents. They could have a slathering of piquant mint and coriander chutney, or a sprinkle of a secret spice mix (the mainstay of Bombay sandwiches). Or they could have quirky stuffings like in the Dahi Toast, which was the subject of a much-discussed article in October. Easy to make, it is nothing but a toasted sandwich stuffed with thick, creamy hung curd, which is jazzed up with a few other ingredients.

Its close cousin, the sooji toast, is another popular favourite. My mother-in-law mixes a few tablespoons of fresh malai with the semolina, adds some finely chopped onions, green chilies and capsicum, and uses it as a stuffing to make her carb-loaded sooji toasts. Her personal favourite is a sandwich made with leftover channa to which some finely chopped onions and chaat masala are added. At times she would slide in a slice of white bread into a simmering pot of chhole and take it out quickly. The bread, soaked in the spicy gravy, topped up with more chhole and some finely chopped onions, was a feeble recreation of the Amritsari pijey kulche she craved in Kolkata.

There is also the simple besan toast or bread pakoras, and the more elaborate ones that come with a spicy potato stuffing sandwiched between two triangular slices, dipped in a besan or gram flour batter and deep fried.

Down South, the Iyengar bakeries of Bengaluru make khara buns (spicy buns) that come slathered with onions and curry leaf masala on the inside, and the iconic masala toast, which is toasted white bread with a spiced topping made with a mix of slivered veggies. Another famous rendition of a desi sandwich is the Kutchhi dabeli – a bun stuffed with spice-laced mashed potatoes and topped with chutneys, peanuts, anardana (pomegranate seeds) and sev. In the Saurashtra region, the curiously named bread katka rules the streets. A cheery chaat, bread katka uses bread as a base. The bread slices are cut into small squares and topped with a range of chutneys, boiled potatoes, roughly chopped onions, peanuts and crunchy sev.

A similar chaat is available on the streets of Kolkata too, but nothing in the city can challenge the absolute supremacy of the dim-pauruti – fried eggs on toast – dished out at makeshift street-side stalls. My favourite version comes topped with finely chopped onions and green chilies and a sprinkling of chaat masala.

Across the country in Mumbai, a relatively recent entry on the Sindhi street food scene is the Dal Toast, says food blogger Alka Keswani. It’s a regular toasted vegetable sandwich bathed in creamy, slow-cooked yellow moong dal, topped with diced boiled potatoes, a few bits of beetroot, roughly chopped tomatoes and onions, the mandatory green chutney and a heap of crisp dal moth for some crunchy relief. Typically, these days, the dal is given its signature smokiness using the dhungar technique. “A small piece of hot charcoal is put in a bowl and placed on the cooked dal,” explained Keswani. “Ghee is poured on top, and once smoke starts billowing out, the lid is placed, trapping the smoky flavours inside.”

Another Sindhi favourite is the seyal dabal. Dabal is Sindhi for bread (perhaps from the term double roti). Seyal dabal is a Sindhi rendition of the bread upma (where slices of bread are cut up into smaller pieces and tossed with spices), only a wetter version. But it’s the mutton dabal that most Sindhis swear by.

Keswani, who grew up on Sunday staples of mutton curry dinners and Doordarshan’s weekly Hindi film telecast, says “during the single 15-minute long commercial break, we would typically fix up platefuls of mutton dabal”. Slices of bread would be cut in pieces, topped with a ladleful of mutton gravy, followed by a few chunks of meat and some green chutney, and finished off with a garnish of chopped onions.

A vegetarian alternative for the mutton dabal is the chola dabal, a breakfast dish of bread and chickpea curry, with some mint and coriander chutney, chopped onions, a dash of spices and some crunchy sev, typically sold at roadside carts. A jolly song from the 1958 Sindhi film Abana urges “dal chhola dabal tu khai vath dal dal” (dal chhola dabal, you eat it more and more) – and the model Sindhi would gladly oblige. I wouldn’t mind a plateful either, although I would rather scoop up some left over kosha mangsho (mutton curry), with my crisp toast and relish it with a side of nostalgia. For what can be more evocative of simpler times and small joys than a warm slice of buttered toast? #KhabarLive