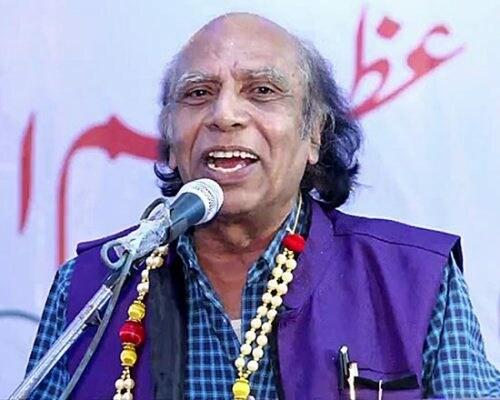 He is the Charlie Chaplin of Urdu humour – suited booted with a no-nonsense look. The only difference is that unlike the iconic comedian, he is not silent. Whenever he goes eloquent, which is quite often, rest assured there will be a laugh riot.

That’s Altaf Husain Shadab for you. Poet, writer and entertainer, he has been bringing cheer to desolate hearts for years. Popularly known as Shadab Bedhadak, he dishes out humour which is direct and in-your-face. Endowed with a rich repertoire of humorous tools, he rises to the occasion bedhadak. This is best explained in his own words:

As his takkhalus ‘Bedhadak’ suggests, Shadab’s shayeri is bold and upfront. Without hurting anyone, he makes his point in a forthright manner. The poetry bug bit him right from childhood. He never missed a cultural programme in his school to showcase his talent. He would recite poems of Allama Iqbal and Mahirul Qadri and receive applause. As he grew up, he devoured novels and short stories of Manto. However, grasping the philosophical shayeri of Iqbal and Mirza Ghalib proved tough.

On the other hand, he found it easy to understand and relate to Shakeel Badayuhi-Naushad songs. He was also impressed by the poetry of Raja Mehdi Ali Khan whom he knew as just a film lyrist. But when Shadab got hold of his humorous poetry, he wanted to turn a humour poet himself. Raja Mehdi Ali Khan’s parody of Iqbal’s famous poem, lab pe aati hai dua, gave him the idea of writing mizahiya shayeri.

Shadab started taking active part in the monthly mushairas held at Vanambadi, Tamil Nadu, where he shifted from Hyderabad long ago. His funny verses and style of recitation evoked laughter but senior poets were not pleased by his shayeri which deviated from the fundamental rules of poetry. Realising that shayeri is not a child’s play, Shadab devoted himself to learning the basic techniques and read all the greats from Ghalib, Wali Daccani, Siraj Aurangabadi, Allama Iqbal, Faiz Ahmed Faiz to Suleman Khateeb.

Having learnt the ropes of poetry, he created a furore in literary circles. He turned to Hyderabad mushairas and earned a lot of applause. Particularly, the mushairas conducted under the banner of Zinda Dilan-e-Hyderabad gave him boost and recognition. He regaled and virtually ‘looted’ the mushairas. Along with humour, Shadab also started dabbling in serious poetry and earned the title of ‘Two-in-one fankar’.

He made a plunge into Hyderabad mushairas in 1968 with the ghazal.

This is a parody of the famous ghazal Aye mere hum-nasheen chal khain aur chal. Shadab was inspired by Gilli Nalgondavi’s brand of mizahiya shayeri and followed his style initially. Later, he found his own rhythm and tempo. Talking about the hard work he put in before he could make a mark, he says:

Shadab has written four books of humorous poetry so far. They are: Dar Guzar (1984), Mitthi Imli Khatte Khajooren (1987), Hansthe Zakhm (2003) and Beyaz-e-Shadab (2012). His fifth book Do Aatisha Aurab is being released on December 31. From nazm to ghazal, geet, parody and khittat, he has written in all genres of Urdu poetry. His poetic skills and imagination come to the fore in the nazm titled Deemak Rani. See how he captures the threat posed by termites to books.

Shadab’s shayeri is simple and easy to comprehend. Liberal use of English and Deccani words add to its charm. No wonder he has a huge fan-following. Especially during mushairas, the audience roots for him and never allows him to leave the mike. Shadab’s poems not merely reflect the current situation but also take swipes at the powers that be in a humorous way. See how he recalls the good old times and the turmoil in Kashmir in his typical style.

From political machinations to changing social mores, Shadab has written on every topic. He focuses on social injustice and ills of society and tries to bridge gaps of understanding among people. His poem Sab Khairiat se Hai is a satirical commentary on the state of affairs. Shadab mocks at the attempts by authorities to present a rosy picture even as violence, unrest and atrocities are the order of the day. He writes:

When Shadab turns romantic, the poet in him sees his beloved everywhere. He gives vent to his feelings and emotions thus:

Who doesn’t know what the present-day Iftar parties have become? A noble gesture meant to foster inclusiveness has turned into tokenism. They are reduced to political tamasha with netas of all hues throwing lavish iftar dinners to curry favour. Shadab takes a dig at such iftar parties in his typical way.

Not just ghazals and nazms, Shadab is also adept at writing parodies. His caricature of famous poems and songs is so nice that they sound original. See how he does a humorous take on Jagjit Singh’s famous ghazal Ye daulat bhi le lo, ye shoharat bhi le lo and comes up with his ‘Gosht Khor Tarana’:

Shadab, who was born in Warangal, also made lyrical contribution towards the birth of Telangana State. His Deccani songs during the Telangana movement were a rage. Sample this verse:

At 70, there is no stopping Shadab. His humour remains sharp and scintillating as ever. He goes about ‘bedhadak’ spreading laughter and enlivening mushairas. #KhabarLive