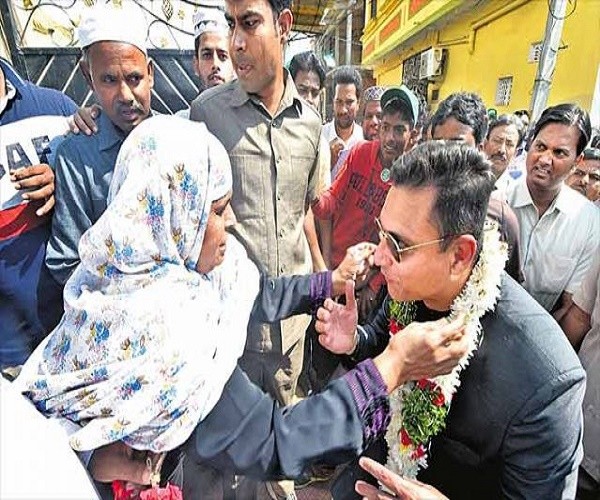 ‘Dekho Dekho Kaun Aaya – Sher Aaya Sher Aaya’ slogans rent the air. Everyone in the jostling crowd compete with each other to have a glimpse. While men and youth try to shake hands, women peer from their windows.

This is the scene during the ‘paidal daura’ (foot canvasing) of All India Majlis-e-Ittehadul Muslimeen floor leader Akbaruddin Owaisi. On Saturday, the four-term legislator, who is contesting from Chandrayangutta Assembly constituency, toured Tulasinagar and Jahangirabad areas. He won the seat in 1999 and since then, has retained it.

“Since morning, a festive atmosphere has prevailed here. A day earlier, local leaders informed us and people bought flowers to garland him,” says a man in his mid 50s.

His mere presence in the locality is enough to send the message to the public. “People here vote only for the AIMIM. There is no other preference, though there are choices. The roads here were once muddy paths. Now they are concrete ones, what more do you want?” asks Ahmed, a party leader from Bandlaguda.

As Owaisi briskly walks along, selecting the route on his own, he stops at a few places where women and men await to garland him. At times, on request he stops at shops and eateries to pose for photographs with the owners.

Every day, the legislator plans such a walk, followed by a public meeting in the evenings. The gathering is huge at both.

“People come from far off places to listen to him. It is not so for other contestants,” says a party worker. “Surely, he is going to win again. There is no doubt,” he adds.

Akbaruddin Owaisi is an active politician based in Hyderabad, Telangana and an MLA of the Telangana Legislative Assembly. He belongs to All India Majlis-e-Ittehadul Muslimeen and he is known for his controversial speeches. Several notable people and organisations criticised Owaisi for the speeches. Several times his speeches sparked anger and outrage on social media.

He is also the floor leader of his party in the Telangana Legislative Assembly. He is a younger brother of Asaduddin Owaisi. He did his schooling from Hyderabad Public School until 10th. After intermediate from St. Mary’s Junior College in Hyderabad he got selected in MBBS in Gulbarga. Owaisi studied medicine for just two years and quit MBBS course to enter politics. He was elected as MLA. Also, he served as a deputy to his elder brother Asaduddin Owaisi, who was leading the MIM in the House.

Akbaruddin Owaisi is the managing director of Owaisi hospital, which was set up by his late father Sultan Salahuddin Owaisi for the welfare of the Muslims. #KhabarLive