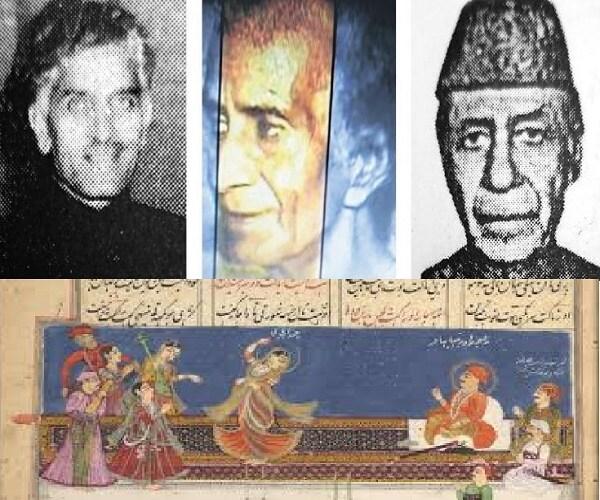 The countryside urdu poetry sounds rough, crude and unpolished. Yet, it is lyrical in its own way. It portrays, rustic poetry has a freshness of its own. For urbanites it may appear jarring at first but the idyllic locations, singing birds and flower-laden meadows depicted in simple language lift spirits. A bit romantic, a little rustic with a sense of whimsy. That’s what dehqani shayeri is all about.

Rahim Saib Mian is the foremost humour poet of dehqani language. Other big names like Nazeer Ahmed Dehqani, Ali Saib Mian, Ajaz Husain Khatta, Suleman Khateeb, Sarwar Danda and Himayatullah just followed him. At a time when none thought of writing poetry in rustic language, Rahim Saib Mian took the lead. What’s more, he made his poems lively and pleasing with sound devices. The ‘khat-khat’ of train, the boom of aeroplane, the cluck-cluck of frogs and chirping of birds can be heard in his poems. Sample some verses:

Nazeer Dehqani took this kind of poetry to greater heights. Use of rural metaphors and simple language differentiates him from other poets. In a way, he raised the standard of Deccani shayeri and people started liking the dehati words used by him. See how he captures the rainy scene in the poem Shayer Aur Barsat.

Nazeer Dehqani displays a fine sense of romance in his poems. On learning about the arrival of his beloved, Mirza Ghalib rued the absence of a straw mat in his house thus:

The same sentiments are expressed by Nazeer Dehqani in his typical style on arrival of his beloved. He says:

After his death in 1984, his sons published his funny poetry under the title Sada-e-Dehqani.

Ali Saib Mian is another great poet of dehqani shayeri. He was so impressed by the poetry of Nazeer Dehqani that he decided to adopt his rustic Deccani style. Ali Saib Mian had a natural penchant for humour and satire. And he used this trait to perfection in his mizahiya shayeri. He did his schooling from Ashraful Madaris and Chadarghat High School and then joined the Osmania University. But his interest in studies gradually declined as he started paying more attention to poetry. Initially, he began parodying famous poets like Ghalib, Momin and Jigar and earned a lot of name and fame.

But when he listened to Nazeer Dehqani’s poetry at a mushaira in Warangal, he decided to follow the great poet. Ali Saib Mian gained such popularity that he was considered an able successor to Nazeer Dehqani. He became a regular feature at the annual ‘Numaish’ held in Hyderabad. Ali Saib Mian presented funny plays during the exhibition. His role as ‘bhoi’ is remembered even to this day.

After giving up college, he worked for brief periods in the Civil Supplies Department and the All India Radio. But given his waywardness and restive nature, he couldn’t stick to any job for long. Later, he realised how he was wasting away his time and this is best explained in this verse:

Ali Saib Mian had a heart which bled for the poor and marginalised sections of society. He particularly felt anguished for the farmers who toiled day and night but didn’t get their due. His poem which has the matla (rhyming words) ‘leao khutba’ has become very popular.

Another important poet of this genre is Aijaz Hussain. He became famous with his takhallus ‘Khatta’. His shayeri is not just sour but has a bitter-sweet flavour to it as well. How he came to adopt this strange pen-name is a story by itself. Once a teacher from North India made an uncharitable remark on the Hyderabad language that khatta khane wale kya jane (what do people who eat tamarind know). Aijaz Hussain took umbrage at this comment and adopted ‘Khatta’ as his takhallus.

He gained expertise in narrating events in everyday language. His poetry takes pot-shots at social, cultural and economic aspects of life. Even as his pungent verses inflict lacerations at the body politic, they also serve as balm to the festering wounds. He was greatly affected by the annexation of Hyderabad and wrote:

Born at Shadnagar in 1922, Aijaz Hussain was inclined towards poetry right from his student days. Though he didn’t produce huge work, his shayeri is enough to perpetuate his name. Aijaz Hussain motivates youth and students towards a life of action with his poetry. In the nazm Sawal, he calls deeds key to success. Sample this verse:

Aijaz Hussain takes a strong position against blind aping of the West. While Allama Iqbal, the poet of East, stirs one to action through his philosophical poetry, Aijaz Hussain conveys the same sentiments in a funny way. He makes a subtle difference between the Western and Eastern values in his own way. He says:

A strong votary of Urdu, Aijaz Hussain was very happy to see the language progress with the establishment of the Osmania University. In his characteristic style, he pays tribute to the varsity founder, Mir Osman Ali Khan, the 7th Nizam, thus:

After merger of Hyderabad into the Indian Union, Aijaz Hussain migrated to Pakistan. And yet, he never forgot Deccan or the Deccani shayeri. He breathed his last on June 1, 1993, but remains alive with his dehqani shayeri.