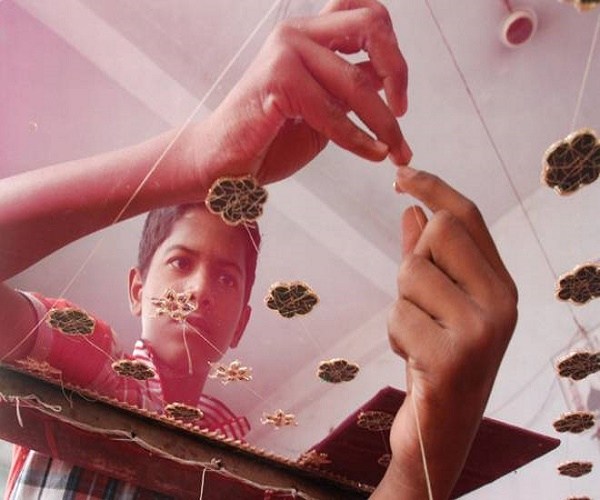 Many children are trained in zardosi designs in several city-based workshops. Squatting on the floor of a faintly lit room, his eyes are fixed on the cloth lain ahead of him, and his frail fingers work with inconceivable nimbleness. With a largely stoic expression, 10-year-old Aarif spends 14 hours each day, in weaving patterns that would barely fetch him Rs. 70 a day.

He is among hundreds of children who are losing their childhood in numerous ‘zari’ (embroidery) units, in narrow corridors and claustrophobic by-lanes in the city, to earn that little to feed themselves and their families.

“I have been working here for nearly two years and get Rs. 500 a week. My family needs that money,” said Aarif, who works in a ‘zari’ unit at the old city. Almost all children engaged in the activity have never been enrolled into a school. Children, as young as eight years, being trained to work on intricate zardosi designs is a household phenomenon in several city-based zari workshops. Economic necessities drive most parents, also engaged in zari work, to coerce their children into the wearisome activity, even for a pittance. Adults engaged in the work are only about Rs.1,200 a week.


On joining a unit, both children and adults, are given an advance that could range anywhere between Rs.5,000 and Rs.1,00,000, depending on the size of the unit. They can leave ‘if and when they choose to’ only on repayment of the advance.

“We take the advance and join because we are in dire need of money. Adults in this kharkhana earn Rs.200 a day and have taken an advance of at least Rs.30, 000. It is impossible for us to pay that amount all at once. So we have to work here,” said 22-year-old Syed Rehan, who was absorbed by the industry at the age of seven.

ALSO READ:  Has Witch-Hunt Of TRS Leadership Begun In Telangana?

Twelve-year-Ahmed, working in the same unit, has also taken an advance of Rs. 10,000 for his family and cannot think of a future beyond the workshop. He, akin to most workers in the field, is a virtual slave to his ‘ seth’ (or master). Workers in the units also said that besides providing cheap labour, children are chosen to work in the field as they can be retained for long periods, because they acquire no other skill throughout their childhood, expect weaving.

Working sometimes until four in the morning, workers, including children, complained about problems of the spine and the eye that come along with their work.

Having acquired a dubious reputation of having the highest incidents of child labour, the State also has children employed in a variety of activities, including domestic labour, making of fire crackers, bangles and incense sticks. “Since the activity is passed on to children by their families and is conducted mainly within households, cracking down on the employers is very difficult,” said Chairman, Child Welfare Committee.

When contacted, officials of the Labour Department in the old city, however, said that they were unaware of the activity and that they would look into the matter.

In another example, a man in his 40s, Basheer Khan has a thousand thoughts running through his mind, even as he is busy stitching gold and silver threads into an exquisite design on an expensive sari. The beautiful peacock design he makes take about five hours to complete in two or three spells. One of the several Zardozi workers, Khan’s thoughts are all on how his could be probably the last generation of the tribe who are adept at hand embroidery or zari work.

“A few years from now, industries will take away our livelihood. Hand embroidery has survived so far, but going by the situation, we feel it won’t last long,” says Khan.

Hand embroidery is done on expensive women’s garments, usually worn on special occasions like festivals and marriages. With the changing fashion trends in men’s wear, the traditional sherwani is also being embroidered with various designs, mainly using golden strings.

Painstaking work
The workers spend hours at a stretch to accomplish the task. “In the end, we are paid between Rs.300 and Rs.400 for the work. The big businessmen who place orders with us sell the dress at prices several times higher than what we are paid. What is the use of getting a pittance after doing all the laborious work,” asks Dilshad, a zari worker from Uttar Pradesh.

Local artisans from the city long ago stopped the trade. “A few who previously did the work have set up workshops where workers from Bihar, West Bengal and Uttar Pradesh are employed. Local workers are unwilling to take up the strenuous job since wages are low compared to other vocations,” says Syed Siddiq, a workshop owner from Amannagar. Several designer studios and big establishments provide work to the zari artisans.

“We go and collect it from them and hand it over after completing the job. Of late, the studios and malls have started employing workers and are offering them monthly salaries. This way, they (managements) are making a lot of profit,” said Siddiq.

Trade on last leg?
At the same time, several high-end machines producing neatly embroidered products on industrial scales have come into the market, signalling the beginning of the end for hand embroidery.

“A few years ago, machine embroidery had left thousands of workers in the lurch. They now do various odd jobs to earn their livelihood. Our fate will be more or less the same. So our children are studying these days to do some decent job,” said Farooq, a zari worker from Nashemannagar in the old city, adding that zari work was seasonal, thus making survival all the more difficult.

Zardozi embroidery is one of the most ancient forms of handicrafts that have been adorning the attires of the royals in India with beautiful metal embroidery for ages! It was also used to adorn walls of the royal tents, scabbards, wall hangings and the paraphernalia of regal elephants and horses. Zardozi embroidery work involves making elaborate designs, using gold and silver threads. Further adding to the magnificence of the work are the studded pearls and precious stones.

The importance of Zardozi embroidery in India is reflected through its various mentions in the Rig Veda which mentions the use of ‘zari’ embroidery as ornamentation on the attires of Gods. Initially, the embroidery was done with pure silver wires and real gold leaves. However, today, craftsmen make use of a combination of copper wire, with a golden or silver polish, and a silk thread to make the products more affordable without affecting its grandeur. #KhabarLive