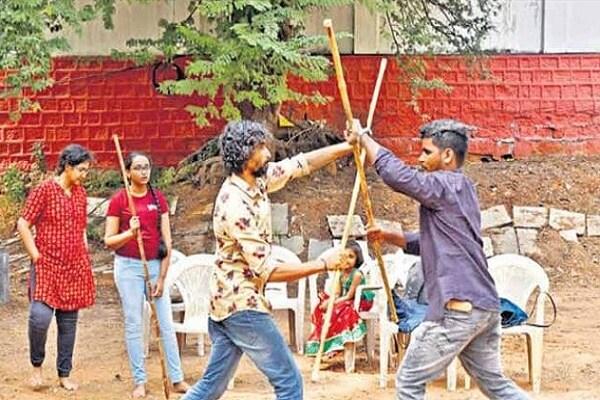 This age-old martial art form is not just another mode of self-defence. It was once a popular activity during festivals and marriage processions, particularly in rural Telangana. Twirling their sticks and exhibiting their swift movies, these martial artistes used to lead processions and festivities.

One of the oldest traditional martial art forms for self-defence, Katte Samu/Karra Samu (stick fighting) holds a special place in the State’s culture. In yesteryears, youngsters were trained in fighting with sticks to protect themselves and the village from thieves. With the passing of years and decades, Karra Samu started to slip into oblivion.

And at a time when this art is on the verge of extinction, Ravindra Bharathi has become a platform to impart techniques to the younger generation through a 45-day workshop. An initiative of the Department of Language and Culture, the workshop seeks to revive forgotten rural traditional art forms and introduce it to youngsters.

Akula Sridhar, the guide for the workshop, said this martial art would be of great help for girls in protecting themselves from wrongdoers. “It also helps individual gain confidence,” he said.

Sridhar had pursued his PhD in Katte Samu and learnt the subject and skills in depth. Now, he is helping young people with different skills handle tough situations efficiently.

“The participants will undergo training in various aspects such as attacking, beating, swinging in different positions, rotating the stick in various directions and others. Though the workshop will not make them fully aware of Katte Samu, it will give much-needed confidence and basic skills to protect themselves,” he said.

A participant, Deepa from Kukatpally, said, “As crimes against women are increasing, learning this traditional martial art form will be very helpful.”

Jyothi, an 8th standard student, said she had been learning Katte Samu for the last one year. “One can have body control, physical fitness and confidence,” she said, adding that the martial art requires a lot of concentration, eye contact and body movement. #KhabarLive