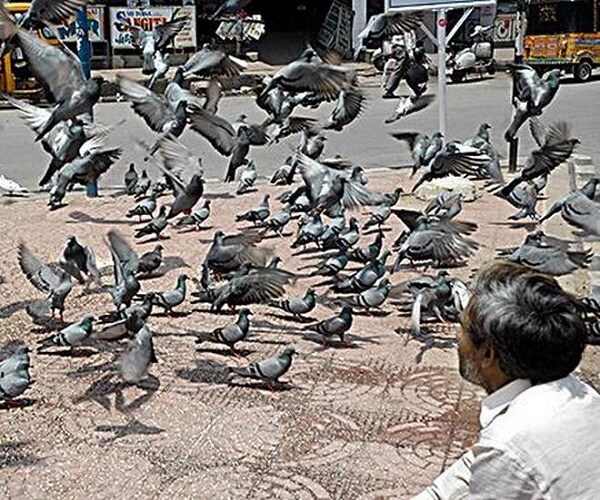 The news we have all missed is that the pigeons have won the “bird-war” in Hyderabad. They are everywhere, lording it over our skies and balconies. In a battle for air conditioning vents, crevices and parapets, the pigeons have turfed out the other competitors, like the house sparrows, almost to extinction.

And yet, we hardly think about it. The reason we seem to hardly notice the change is because pigeons are not very noticeable. Well, unless they dump in your balcony, or worse, on you, they have won, not by virtue of any special quality, but simply by being a survivor.

While numerous environmental challenges gulped other birds down, pigeons not only survived, but thrived. Perhaps no other animal gained as much from urbanisation as the pigeons. It gave them the three most essentials: a safe place to nest, a constant feeding place aided by do-gooding humans, and most of all, the absence of predators, wiped out by urbanisation. In such a comfortable space, and being a species with fast breeding rates, hatching up to six times a year, pigeons multiplied at lightning rates, becoming the ubiquitous urban bird.

Like all the other survivors in the animal kingdom, the pigeon is resourceful, but unassuming. While other birds are famous for their special inherent qualities: glowing beauty of the peacock, the serene sounds of the cuckoo, the majesty of the flight of the eagle, the enigma of the owl, the pigeon is most famous for the workmanlike function of delivering messages.

The pigeon inevitably lost out to superior technologies of communication, and, in the age of email, this function of the pigeon has been all but reduced to quaintly humorous stories of contraband-delivering pigeons, from the 200 pills of ecstasies recovered from a pigeon in Kuwait to the “Pakistani spy” pigeon intercepted in Pathankot, allegedly carrying notes threatening Narendra Modi.

It perhaps reflects the pigeon’s relatively colourless personality that our reference to pigeons — in our folk and children’s stories, in our poems, and in our language and cultural symbols— comes from this letter-delivery function. No scheming crow, no peaceful dove, no ruthless eagle, no insomniac owl; just a pigeon with a job. The only Hindi song that comes to mind featuring a pigeon is in the movie Maine Pyaar Kiya, where the pigeon acts as the go-between for the purported first letter of the first love between Salman Khan and Bhagyashree.

But messages are not the only things spread by pigeons. Ornithologists believe they are spreading respiratory diseases through their droppings and feathers. There are warnings by doctors, specialising in respiratory disorders, that exposure to pigeon worsens the symptoms of patients already having asthma or bronchitis. The image of the pigeon approaching you piercing through the smog is not for you, if you are weak-lunged.

A recent report on the pigeons makes for gloomy reading. “Dried droppings of pigeons contain spores, which if inhaled may lead to respiratory illness. Their faecal matter is highly acidic and may destroy buildings and monuments. Female pigeons can give birth to 48 squabs per year. Average lifespan of a pigeon is around 20 to 25 years. On an average, a well-fed pigeon creates around to 11.5 kg of toxic droppings per year.”

The report further informed us that the year 2001 also gave birth to a less heralded global war: the war on pigeon shit. Since 2001, a ban has been imposed on feeding pigeons at London’s Trafalgar Square owing to health hazards. Venice joined it in 2008 when it introduced penalty on people who sell grains for birds at St Mark’s Square. A few years ago, Catalonia started feeding pigeons Ovistop, a contraceptive made of corn seeds covered with Nicarbazin to control their population.

Not devoting much attention, or attaching any special importance, to the pigeons, we, as a culture, have benignly tolerated them. It is our most popular bird, according to studies, and it provides a marked contrast with our national bird. While the pigeon is ubiquitous, the peacock is hardly seen by anyone outside sanctuaries and jungles.

This is understandable; national symbols represent ideals and aspirations, not the norm. The peacock, leisurely gliding around in cool and colourful magnificence, hardly captures the reality of life in India. The unextravagant, almost colourless, pigeon, meanwhile, represents the actual state of the nation: lots of chaotic movement and energy, teeming with people busily grinding it out and shuttling between mediocrity and resourcefulness.

The pigeon is at home in this country. While their rise poses challenges and inconveniences, they must not be shunned; they are a flying emblem of a nation of grit and resourcefulness, which, without being brilliant at anything in particular, has managed to survive and, given the right conditions, thrive. #KhabarLive