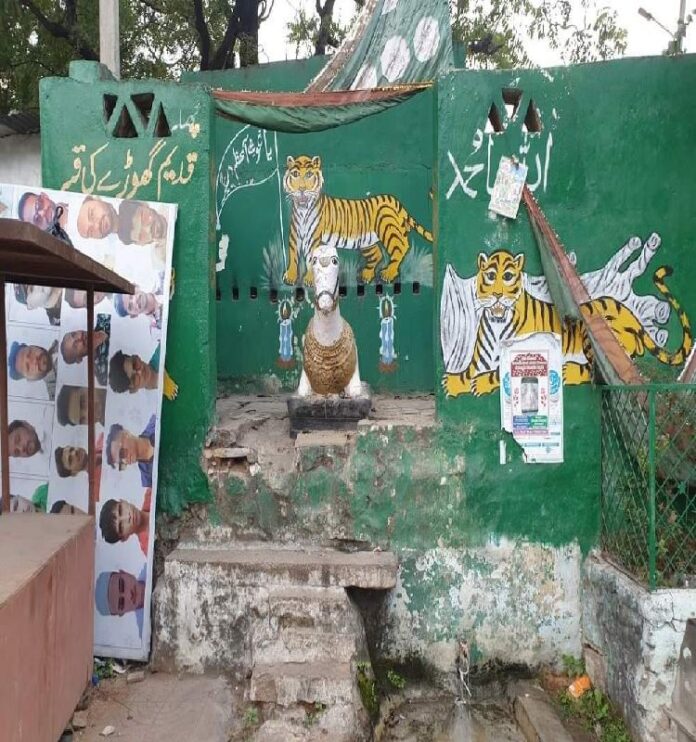 The historic city of Hyderabad has tombs, monuments for the departed high and mighty, and then, graves for horses too in the old city areas. Hyderabad, The only city of Nawabs is also famous for its weird, astonishing places and their names. One such place we come across in Hyderabad old city is Ghode ki kabr(The grave of horse).

Drive down from Mangalhat on the Aghapura road in the old city, and you will come across the statue of a horse abutting the Kausar Bakht Takiya graveyard. The spot is popularly known as ‘Ghode Ki Khabar’ – the grave of a horse.

One of the oldest graveyards of the area attached to Dargah Etbar Bukhari Shah and famously referred to as ‘Ghode ki Khabar’ is slowly being gobbled up by the land sharks. Several shops have already come up, where a boundary wall existed earlier. Not only that, some of the encroachers have also constructed houses on the premises. The rapid growth of market area in the lanes and bylanes of Begum Bazar has pushed traders to take extreme measures to establish their businesses. Once considered to be buffer zone of different localities in the area and which connected areas close to Nampally to Begumbazar, the Ghode-ki-Khabar or horse grave has induced some realtors to eye the centuries-old graveyard.

One more such grave is found in a lane at Mochi Colony in Tadban, which however has been damaged over time.

At Ghode Ki Khabar, the statue is of a horse lying down and looking ahead, with some people the horse buried at the spot was saintly, while there is a more popular legend that says a saint who lived there had a horse as a pet, and when it died, the local people gave it a decent burial outside the graveyard.

Out of more than two acres of land, around 300 sq yards space has been already encroached upon. “Two men are engaged in this type of activity of late, at two different spots. They are collecting Rs 1 to 2 lakhs as advance from businessmen who wish to establish their business in the space, for a monthly rental of Rs 20,000,” said Syed Khaja, a resident of the area.

The area which is close to Mangalhat, Darussalam, besides Begum Bazar, has also witnessed rapid influx of Hindi-speaking north Indian population in the recent years, contributing to the transformation of residential area into a market place. Owing to RTC bus service’s last point which runs between Nampally and Ber Ban Bagh, this location is a bustling transit point for thousands of commuters.

“Rapid commercial activity has encouraged some anti-social elements to encroach upon the graveyard. They are slowly converting it into a regular source of income,” explained Ismail Khan, a regular commuter. When The Hans India took the issue to notice of the authorities, particularly the Chairman of TS Wakf Board, Md Saleem, he assured to look into the matter shortly.

“Usually, animals are not buried in graveyards where human beings are laid to rest. But as the horse belonged to a saint, it was buried right outside the graveyard,” says Mateen Shareef, who runs a mechanic shop near the graveyard.

The legend has been around for over 150 years, locals say, with the people organizing annual celebrations at the place where a ‘Nishan e- Mubarak’ (religious flag) is replaced.

Legend has it that one of the saints resting in the vicinity of the graveyard used to ride a horse and developed strong attachment to it. When his horse died, it was also buried close to his shrine. The graveyard which was earlier called as Qabrastan Kausar Bakht Takiya for almost three centuries later became famous as Ghode Ki Khabar. “For the past 150 years, this graveyard is referred to as Ghode Ki Khabar, perhaps remembering the death and burial of the horse of saint here,” said Khaja.

“A food camp for poor people is also organized at the place every year during the annual celebrations,” informs Niyazuddin, who runs a marfa band shop near the spot.

Whatever might be the reason and history of this place ,it depicts the unique cultural and religious fusion of Hinduism, Islam and local faith, and almost in every city you find something that represents neither of the religion or has ingredient of both of them. It shows the world respect and importance given to animals in this country. #KhabarLive #hydnews