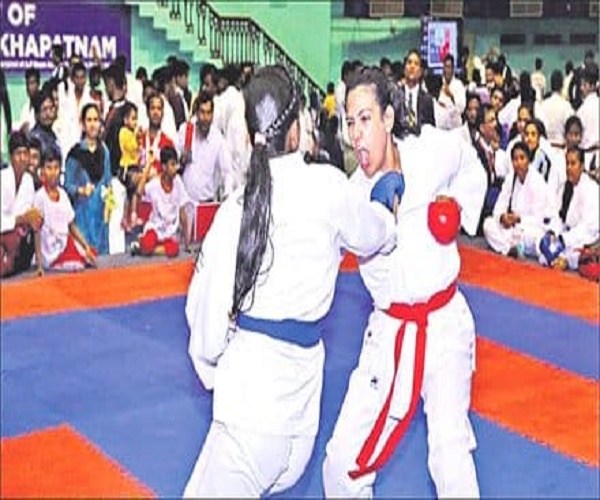 At a time when most youngsters are busy running behind government jobs, banking sector and multinational companies in pursuit of their dreams, this 24-year-old girl from Hyderabad is chasing dreams and aspirations of a different kind – by doing wonders in karate, which is considered a male bastion.

Ramya Tejaswini Cherupally, who resides in Kothapet, has recently won the Gold medal in ‘Kata’ category and Bronze medal in ‘Kumite’ category in ‘International Karate Championship 2019’ held in Visakhapatnam. Interestingly, she could achieve this within eight months of training and practice.

The man behind her success is none other than her brother, Vivek Teja who won several medals in martial arts at national and international level. “More than a brother, he became a good coach for me and guided me to achieve a gold medal,” said Ramya.

That’s not all; she was even a gold medallist in her academics when she did graduation (BCom Computers) in Don Bosco Degree and PG College. She was the first rank holder from the Mahatma Gandhi University, Nalgonda, in 2014.

Prior to this, Ramya was conferred with Prathibha Award from Telangana Board of Intermediate Education as she bagged the third rank in Commerce stream in the State with 94 per cent.

Any girl can balance both her academics and aspirations if she sets her mind to it, and all she needs to do is overcome the fear and be courageous to achieve her goals.

“Being a girl itself is the biggest strength and one’s gender should never become a barrier to anyone,” she said.

“At present, my focus is to tell what a Hyderabad girl can do at nationals which will be held in May. My ultimate goal is to achieve a medal in the Commonwealth Games 2022,” she said.

Who wants to leave a post as an assistant manager in Axis Bank and also a good profile job in a multinational company with handsome salary? Not many! But, Ramya did it.

After her graduation, she pursued her MBA (Finance) from Badruka College of Commerce and Arts and was getting a host of placement offers from third semester itself, and, eventually, she began her professional career.

However, she was not happy with her work and wanted to something away from the routine. Tejaswini discussed it with her brother Vivek. He, then, asked her to try karate to test her self-defence skills.

Vivek was surprised by the way his sister has been gaining experience in a short period; he stood by her and encouraged from the beginning. “My brother has asked me how could you grasp these skills so quickly and learn Kata in a short time – it usually needs some years of dedicated practice,” she added, before signing off. That dedication and practice are probably what made Ramya stand apart from her peers and keep adding feather after feather to her cap. #KhabarLive