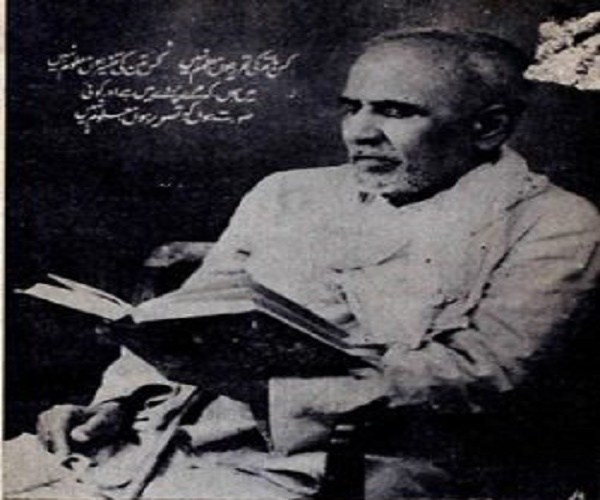 The poet is best known for his rhyming quatrains which have a mystic and philosophical flavour and leave an invigorating effect on readers. Hyderabad is a place for great poets in which Amjad Hyderabadi stands in first row for his catchy and timely ‘rubayee’.

Sometimes, it takes a natural disaster to reveal a great mind. The Musi floods of 1908, which laid bare everything that came in its way, had a silver lining too. It led to the planned development of Hyderabad and construction of Osmansagar and Himayatsagar reservoirs. The historic deluge turned into a swirling one-eyed monster cutting a swathe of death and destruction. Among the unfortunates were the mother, wife and daughter of Amjad Hyderabadi. They all got washed away in the gushing waters right before his eyes. But, he survived miraculously. In the hindsight, it appears that the tragedy resulted in emergence of a poet par excellence.

No, he didn’t rot, but chose to grow. He didn’t quit, rather chose to persevere. The tragedy gave a cutting edge to his poetry, deepened his thoughts and broadened his perspective of life. Amjad gave vent to all the sorrow, pain and anguish he experienced through his poems. In a sarcastic tone about his escape from the jaws of death, he remarks:

ALSO READ:  The Evolution Of 'Rahul Gandhi' - A Millennial Perspective

Amjad’s poem Qayamat-e-Soghra (The Minor Doomsday) gives a touching account of the Musi floods. It captures the human suffering and misery like nothing else.

Amjad is Hyderabad’s best-known poet. Though he has tried his hand in all genres of Urdu poetry, he gained popularity as the writer of rubaiyat, a collection of rhyming quatrains. His poetry is free from romance tropes – husn-o-ishq, gul-o-bulbul. His is a ‘poetry of purpose’. His verses are full of humanism and philosophy.

Having seen death from close quarters, he mirrors the vicissitudes of life like no other Urdu poet. If pathos and pain underline his verses, there is also an element of hope and courage in his poetry. While explaining the harsh realities of life, Amjad often turns mystical and advocates fortitude and happy submission to the will of God. And this is the reason why his shayeri appeals to all and sundry. This oft-quoted rubai tells it all:

Simplicity, profundity of thought and elegance are the hallmark of a great poet. And, all these elements are found in abundance in Amjad’s poetry. Like Allama Iqbal, the poet of East, Amjad is also a poet with a message. There are several verses in which he calls for realising the inner potential. In his long nazm, Dunya aur Insan, he captures man’s penchant to amass wealth by hook or crook and points out the pitfalls ahead:

Born Syed Ahmed Hussain in 1888, he became famous with his nom de plume, Amjad Hyderabadi. He lost his father days after his birth and it was left to his mother to bring him up. He had his early education at Nizamia and Dar-ul-Uloom schools. Later, he worked in the Accountant General’s office and retired from here. Right from the age of 14, Amjad started writing poetry. Initially, he took guidance from Habeeb Kantori but, he did not have to struggle much as he was a natural poet. He authored 15 books of poetry and prose. They include Rubaiyat-e-Amjad (three volumes), Riyaz-e- Amjad (two volumes), Kharqa Amjad, Nazr-e-Amjad, Jamal-e-Amjad, Gulstan-e-Amjad, Payam-e-Amjad, Haj-e-Amjad.

Over the years, Amjad established himself as the master of Rubaiyat and earned the title of Hakim-al-Shuara. His Rubaiyat have a mystic and philosophical flavour. They have an invigorating effect on the reader. Sample this ghazal immersed in tasawwuf:

What is unique about Amjad is that his spiritual poetry is not always wrapped in high-flown language. Amjad expresses the intensity of his feeling in simple day-to-day language. See how this ghazal blends deep thoughts with simple words:

Amjad died in 1961 and is laid to rest at Dargah Hazrat Shah Khamosh in Hyderabad.#KhabarLive