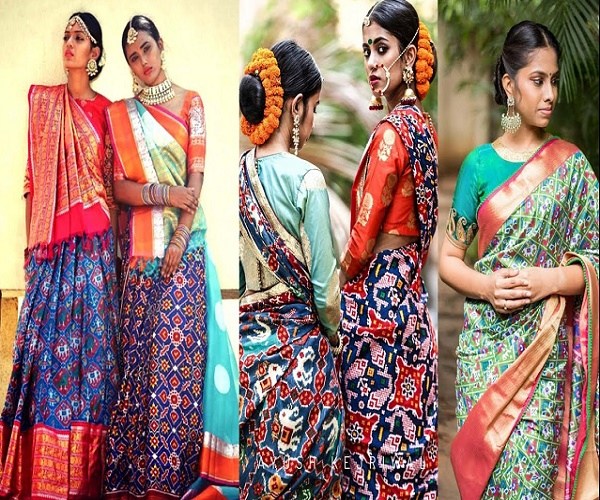 From the legends surrounding its origin to the time-consuming process that makes it so invaluable, designer Ayush Kejriwal talks to #KhabarLive about the intricacies involved in making the patola weave.

The recent revival of Indian weaves has led to a renewed interest in several time-honoured techniques, and Gujarat’s famous weave, patola, is high on that list. Considered heirloom buys owing to their one-of-a-kind designs and painstaking weaving technique, an authentic patola is as intricate as it is impactful. Designer Ayush Kejriwal, who is a champion of this timeless weave, gives Vogue a masterclass in everything you wanted to know about it. Excerpts:

Can you tell us about the origin and history of the patola weave?
The name patola is derived from the Sanskrit word ‘pattakulla’, and is the plural form of the word patolu. Even though the patola fabric is said to be of Gujarati origin, its earliest mentions can be found in religious texts in South India too. The religious text Narasimha Purana talks about this fabric being worn by women during ceremonies and holy occasions.

Its Gujarati connection, pattakulla, first appeared only after the 11th century. After the decline of the Solanki Empire, the Salvis found a rich trade in Gujarat. Patola saris quickly became a sign of social status among Gujarati women, especially as part of their wedding trousseau. It is believed that 700 silk weavers from the Salvi caste of Karnataka and Maharashtra moved to Gujarat in the 12th century to acquire the patronage of the Solanki Rajputs, the ruling class of Gujarat and parts of Rajasthan at that time.

There is another story that claims that patola originated 900 years ago, owing to the patronage of king Kumarpala, who made it a symbol of wealth. Initially, his patola supply came from Jalna in Maharashtra. But on learning that the king of Jalna used the patola as bedsheets before selling or gifting them to other aristocrats, he brought 700 patola craftsmen and their families from Maharashtra and Karnataka to Patan in Gujarat. It’s said that he then staggered production, and despite the seven-month-long manufacturing time, he received at least one new patola to wear to the temple every day.

How is the fabric created?
Patolas are manufactured by the resist-dyeing process using the warp and weft technique. It normally takes three people about four-to-seven months to weave a patola, making it expensive and time-consuming.

A sword-shaped stick made out of rosewood, called vi, is used for adjusting the yarns. The first step involves tying of the yarn with cotton threads according to the pattern. Measurements can be as small as 1/100th of an inch. The yarn undergoes multiple cycles of tying and dyeing, following a specific order of colours. Displacement of even a single yarn can disturb the design arrangement and make the entire set redundant.

Every colour has a unique place in the design; which needs to be carefully aligned while weaving it. Such intricacy requires extreme precision and patience. A unique feature of the patola loom is that it is tilted to one side, and requires two people to work in tandem on one sari. Depending on the length and intricacy of the pattern, it can also take up to a year to make these pieces.

What are the different kinds of patola, and what makes them so unique?
Patolas are generally represented by abstract designs and geometric patterns. Elephants, human figures, kalash, flowers, shikhar, paan and parrots as well as designs inspired by the architecture of Gujarat are popular. The most sought-after designs each have their unique names like nari kunjar bhat (women and elephant patterns), paan bhat (peepul leaf motif) navratna bhat (square-shaped pattersn), voharagaji (inspired by the Vohra community), fulvali bhatt (floral) and rattanchowk bhat (geometric).

The complexity and time-intensiveness is what makes patola so valuable. A dizzyingly mathematical process, it involves intensive manual work, fortitude and exactitude. Natural dyes like catechu, cochineal, indigo, turmeric, natural lakh, harde, madder roots, manjistha, ratnajyot, katha, kesudo, pomegranate skin, henna and marigold are used in making them. The fact that they are reversible, their unfading bright colours, and their rich history add to the uniqueness.

Can you explain the difference between single ikat and double ikat patola?
Ikat is a type of textile produced in modern-day Andhra Pradesh and Telangana. It’s a common name for the yarn, technique and the fabric. Generally speaking, it is a technique that involves resist-dyeing. Bundles of yarn are tightly wrapped together and then dyed as many times as is required to create the desired pattern. This dyeing process is different because the yarns are dyed before being woven into cloth. In most of the other resist-dyeing techniques, like batik for example, it is the final cloth and not the yarn, that’s dyed.

The most complicated type of weaving is double ikat, where both the warp and weft threads are resist-dyed prior to weaving. In single ikat, it is the weft threads that are resist-dyed. The pattern will be formed only as the weaving progresses. This means that the weaver has to constantly centre and readjust the yarns to ensure the pattern is formed correctly.

ALSO READ:  The Magic Of Couture Of 'My Expression, My Pride' In 'Hi-Life Exhibitions'

What is the cultural significance of patola saris for brides?
Patolas are essential in ceremonies of certain communities as they are believed to have magical powers to ward off evil. A popular pattern including a circle of lotus flowers, buds and leaves known as chabardi bhat (basket design), is associated with fertility and is worn for wedding ceremonies in some cultures. In Gujarat, patolas are given to brides as a part of her trousseau.

How do you modernise the weave through your collections?
My aim has never been to modernise this age-old craft. It is perfect just the way it is, and I don’t intend to mend what’s not broken. Instead, I strive to innovate the patterns in a traditional colour palette. The kaligulab patola from my collection is a good example. It has elephants on the border and red roses in the body, which is unusual for a patola sari.

Where are your artisans based?
I work with weavers from Patan and Rajkot as I stock both single and double ikat patola saris. It took me some time, but I was able to convince my weaver in Patan to weave single ikat patolas rather than only double ikat, making it more affordable for my patrons. The kaligulab patola is a result of that.

What are some of the challenges that the artisan community is currently facing in weaving patola?
Digital printing and mass production of patola-inspired patterns in Surat is heartbreaking. Often, people are unable to appreciate the skill, time and energy that goes into making a patola which justifies its value—they are not expensive, they are priceless. #KhabarLive