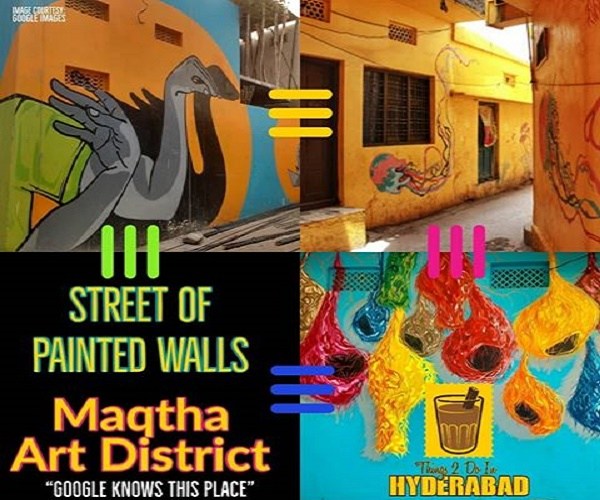 Transforming the concrete canvases into various expressions and giving the space an interesting visual metaphor rendered in vibrant hues, ‘Maqtha Art Festival’ makes a comeback for the third time to create more dialogues wrapped with multihued ideas around the massive walls.

Connecting communities
Initiated by St+Art India with support from Asian Paints and Krishnakriti Foundation, the festival is all about being colourful, emotive and powerful. And, this year, three artists from three countries have been assembled by the foundation to brighten up the lanes with their brushes; Manolo Mesa from Spain, Rouge from France and Ness Lee from Canada.

Armed with a fresh batch of paints on the streets opposite to People’s Plaza on Necklace Road, the artists have already geared up to transform the residential blocks of MS Maqtha with an artistic touch. While one of them, Manolo, has already left the city after giving a shape to his artwork with blue shades, we catch up with the other two artists to understand their artworks.

Ness Lee, who also does illustration, has worked with huge simplified forms giving it a feel of nature and divided the space with an interesting mix of colours while complementing the lake opposite the wall. Talking about it, she says, “From navigating the process to sketching it out on a bigger scale, the whole experience has been quite interesting. Also, my aim while making a mural is always to make sure that the spectator is able to connect to it; they are able to understand it.”

Aesthetic display
Adding further to the talk of making murals, Rouge from France explains about her work. She tells us, “The surrounding of this place demanded the usage of certain colours. Hence, I used them and tried making it very aesthetic by displaying the drapes of saris being piled up. For me, this creation is figurative that is based on reality and represents the daily life while focusing on issues like gender inequality.”

Pointing out the series of works done by other artists, Karan Kaul, assistant curator of St+Art India, narrates how the people of Maqtha, who used to be sceptical at the beginning, have become helpful and supportive in converting those faded walls into some kind of stories.

“Giving your home’s wall to get mural painted is obviously a tough decision. But, comparatively, convincing the residents has become easy because we have people from here working in our team who help in communicating. We try to give them a framework on how it is going to look like. And, they are quite happy with the outcome.”

Capturing colour-coded walls
Whether you’re a stranger or a local, the good news is that there’s no ticket to be paid to just stop by. So, get yourself to the gullies of MS Maqtha and witness the gritty graffiti and big-eyed caricatures. Also, the buzz of festival will continue till April 8. So, if you’ve have not taken a stroll around this art district, this is the time.

Know the history
Until 2016, the streets of MS Maqtha had no identity. People would identify their houses based on the shops. But, now, the streets have got their own identity and are divided into four districts, created by navigation system based on colours: Green Gully, Yellow Gully, Pink Gully, and Blue Chowk.#KhabarLive