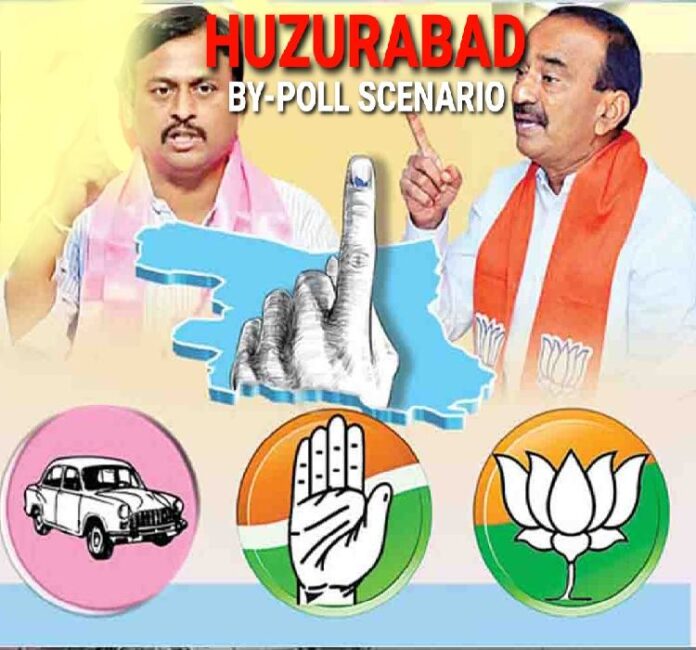 After the hectic political schedules of campaigning process, at last the high voltage electioneering ends. The voters mind still not stablized with any party manifestos, promises and action plans. The TRS wants to make sure that it faces no challenge in the run-up to the 2023 Assembly polls and get a easy walk win with its pet projects and welfare schemes. It looks quite hard this time as the voters realized the intentions of dirty politics spreading dangerously to harm them.

It apparently feels if Eatala even manages to win by a wafer-thin majority, it could lead to a situation where other voices of dissent against TRS may get bolstered.

Star campaigners of all political parties are trying to reach out to as many voters as they can by undertaking whirlwind tours of five mandals, even in remote corners, in the constituency. Campaigners and candidates are resorting to all sorts of tricks to woo the voters. Some are visiting gyms during early morning hours, while others like Harish Rao are donning the role of a common man and walking into chai shops to interact with people over a cup of hot tea. TRS is making all-out efforts to dub the two opposition parties as anti-dalit parties.

From Congress, former TPCC president N Uttam Kuma Reddy has been telling the youth that wiping out unemployment is their goal. Veterans V Hanumantha Rao and T Jeevan Reddy are trying to woo the BCs.

From BJP, along with Union Minister G Kishan Reddy, Nizamabad MP Arvind Dharamuri, BJP national vice-president D K Aruna and state president Bandi Sanjay are among the star campaigners who have been sweating it out.

While TRS alleges that BJP and Congress are hand in glove and that Eatala even secretly met with TPCC president A Revanth Reddy, Congress retorted that it was KCR who during his Delhi visit in May insisted that Eatala be admitted into BJP, and that the criticism of BJP is nothing but shadow boxing. Both the pink and the saffron parties are one, he has been thundering from public platforms.

BJP, on the other hand, says that Congress is making such allegations only to help the TRS win, since both have a secret understanding. It claims the fight between BJP and TRS is a fight between KCR’s arrogance and the pride of Huzurabad voters. They have also taken the line that most of the development in Huzurabad has been carried out with central funds and that the State has not released funds for the constituency.

With the campaign to end in next two days, TRS feels that it would win the polls with the support of Dalit votes. Out of 2.10 lakh voters, there are about 50,000 Dalit voters. In addition, it has also promised quotas for Gouds in allotment of liquor shops and bars and this is likely to help it garner votes of other backward communities.

Well, more than all these schemes, promises and hectic campaign, as usual liquor has been flowing like anything and as the day of polling approaches, cash flow into the voter’s pockets will also be on large scale.

The TRS which started off on a doubtful note is now giving a tough fight to Eatala. The result will make it clear what weighs more with the people – the past performance of the candidates, freebies by the government or money and liquor. #KhabarLive #hydnews