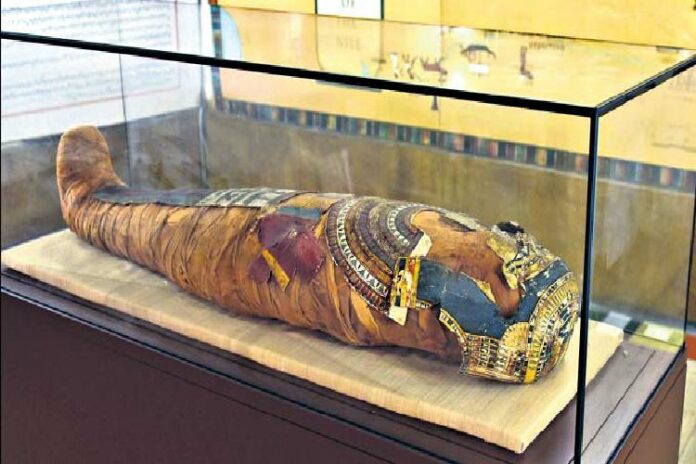 Believed to be at least 2,100 to 2,400 years old, Princess Nishuhu’s mummy was brought to Hyderabad as a gift to the last Nizam Osman Ali Khan by Nazeer Nawaz Jung, the son-in-law of his predecessor, in 1920. The Nawab bought the mummy for 1,000 British pounds.

Nishuhu was possibly the daughter of Ptolemy VI Philometor and was about 25 years old when she died. The scan of the mummy also revealed a metallic piece and an amulet kept with mummies for protection from evil supernatural forces according to the Egyptian traditions. However, the officials are not sure about what caused her death.

As of now, from an airtight glass enclosure, it is now a nitrogen chamber that is helping Hyderabad’s famous Egyptian mummy survive thousands of miles away from its home. The remains of Princess Nishuhu, who lived in the Ptolemaic period between 300 BC and 100 BC, are kept safely in the nitrogen chamber in the Telangana State Archaeology Museum at the Public Gardens in Hyderabad.

Giving an insight into the process, Ganga Devi, Assistant Director of the museum and the chief in-charge of the mummy, said to #KhabarLive that “right from the time when the mummy was brought to Hyderabad, it was kept in a wooden box. However, all the exposure made the fabric around the head fall apart and the overall covering loose. However, a few years ago, renowned art and heritage conservation expert Anupam Sah helped us restore the mummy. It is now kept in an oxidation-free environment. The showcase we have kept it in is connected to a nitrogen box below it, which supplies nitrogen and throws out oxygen 24/7. This prevents any decay or further ageing of the mummy. The glass used for the casing was imported from Germany.”

Besides the nitrogen box, a fine mesh was added as a protective wrapping layer to avoid further decaying of the covering of the mummy. The experts also made sure that its colour matched the mummy’s.

Talking about the mummy’s condition, Ganga Devi shares, “when the experts from Mumbai came to properly conserve the mummy, we took her to a hospital in Nampally for a scan. According to the reports, the mummy’s ribs were damaged and there was dislocation on her spine and an ankle. However, the rest, including the skull, are intact. The CT Scan revealed that some part of her brain is also intact. Generally, during mummification, the brain is taken out through the nasal passage.”

Ganga Devi adds that the mummy is now in a good state and will need no restoration for a few decades. “Earlier, its toe and skull were exposed, and the mummy had direct contact with air, which was worsening its state. However now, we have completely wrapped the mummy carefully under an expert’s guidance. It is safe for at least two decades, but I believe even after 20-25 years, it will be in good shape. I can say that Princess Nishuhu’s mummy, one of the six mummies in India, is one of the best conserved ones in the country.”

Meanwhile, the footfall at the museum, which was closed due to the pandemic for eight months, is picking up.

Mallu Naik, Assistant Director of the museum, shares: “Earlier, we used to have at least 200-300 visitors each day, and up to 400 on Sundays. Initially, when we reopened the museum, we didn’t have any visitors. Now, it is hovering between 50 and 60 a daily. We hope that the numbers will increase.” #KhabarLive #hydnews