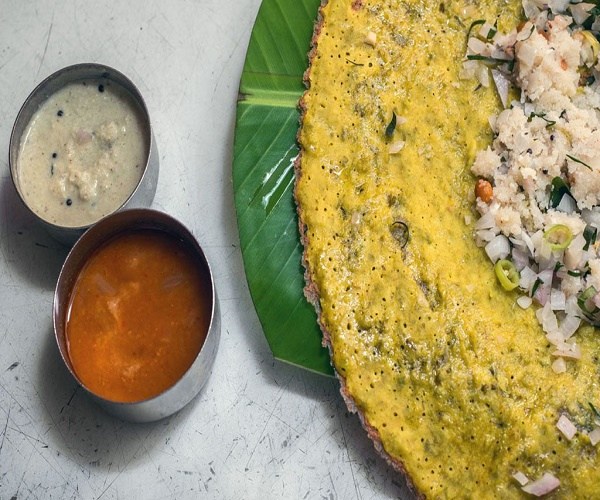 In Hyderabad, politicking isn’t limited to the state legislative assembly. It’s trickled down to menu cards too. One of the hot-selling breakfast items at the city’s eateries is the MLA pesarattu: a crisp green-gram dosa stuffed with upma, like the potato stuffing in a masala dosa. MLA pesarattu is an inventive take on the original green-gram dosa. Pesarattu is made with a batter of fresh green gram, or “pesalu” as the lentils are called in Telugu.

The story goes that it was invented decades ago by a creative cook at the canteen of the MLA quarters in Hyderabad. In an attempt to impress his VIP customers, he created a richer, more indulgent version of the classic pesarattu (usually made without the stuffing). The dish caught on and is now served at street-side joints, in Telugu homes, even five-star hotels.

The MLA is best sampled first thing in the morning when the dough is fresh, and hasn’t surrendered to fermentation. The filling is a simple semolina upma, seasoned with cumin seeds, finely chopped ginger and green chillies. Score a table at Dwaraka Tiffins (Adikmet Road), a humble eatery and popular takeaway, to see its transition from runny batter to a caramel-coloured dosa—the restaurant’s tables are lined alongside an open kitchen.

You can also get it at Chutneys (Kukatpally) and Kuchipudi (Somajiguda) that serve good breakfast fare. When all else fails, look for an Udupi restaurant with the words “Bhavan” or “Tiffin” in its name. Most of these fuss-free cafés have the VIP stuffed crêpe on their menus. Round off the meal with a steaming tumbler of filter coffee and you’ll be fortified for the day. #KhabarLive