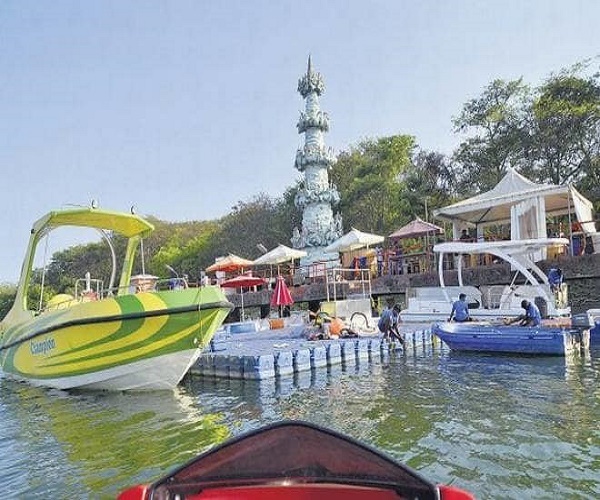 Denizens of Vijayawada, or for that matter people who visit the small city, often complain there are no entertainment venues other than movies and restaurants.

Andhra Pradesh Tourism Department, which is raring to tap the potentiality of tourism for Andhra Pradesh in general and Vijayawada city in particular, has launched a number of entertainment opportunities. It has chosen the Bhavani Islands situated in the middle of River Krishna at the foot of the Indrakeeladri Hill, the abode of Goddess Kanakadurga.

Actually, Bhavani Islands is an archipelago of seven islands right from the Prakasam Barrage to as far as Amaravati, one of the oldest villages in Guntur district. So far, though the biggest island of them is being used, the officials are preparing massive plans to put the rest of them also in use.

For the last two and a half decades, the Bhavani Islands have been on the development agenda. However, after the division of the State and announcement of Vijayawada as the capital city, the State Government headed by Chief Minister Chandrababu Naidu gave a free hand to the tourism, language and culture department headed by its principal secretary Mukesh Kumar Meena to concentrate on its overall development.

So far, people are satisfied with the boat journey to the island carrying some food packets with them and return in the evening after moving around in the nearly 150 acres of woods.

Managing Director and CEO of the Tourism Development Authority Himanshu Shukla, who is also the managing director of Bhavani Island Tourism Corporation, took initiative to introduce new features to the island. “Generally, the tourists are prepared to earmark some amount of money for the tour. We need to provide them good food, nice hospitality to make them spend more on the tour,” says Himanshu Shukla.

The journey of the tourists starts on a boat at Berm Park near Punnami Ghat of River Krishna which lasts less than 10 minutes.

Right from water scooter, water bicycle, a rolling balloon on the river and speedboats to the tugging boats a number of facilities are available for the enthusiasts. Children love to water-bicycling in protected water zone. If they are adventurous, they could opt for speedboats, water scooter and other activities.

Accommodation
A beautiful row of cottages, in all 24 in number including some Tree-Top cottages, are waiting for the tourists to relax for the day. With the 24-hour check-in, they could comfortably stay in them. All these cottages are situated above ground level and there is no ground floor for these cottages. In case of threat of flood to the island, which is very rare, the guests could comfortably stay in their cottages till the water receded. The last time the islands were flooded was in 2009.

The picnickers could go around them on the sprawling 150-acre island by hiring a bicycle which is made available by the Tourism department.

Four food courts serving vegetarian and non-vegetarian food are open on the lawns at various places on the island. In addition, there is a glass restaurant which serves yummy food indoor for the gourmets.

Himanshu Shukla says that there are more plans to develop the other islands too in near future. #KhabarLive