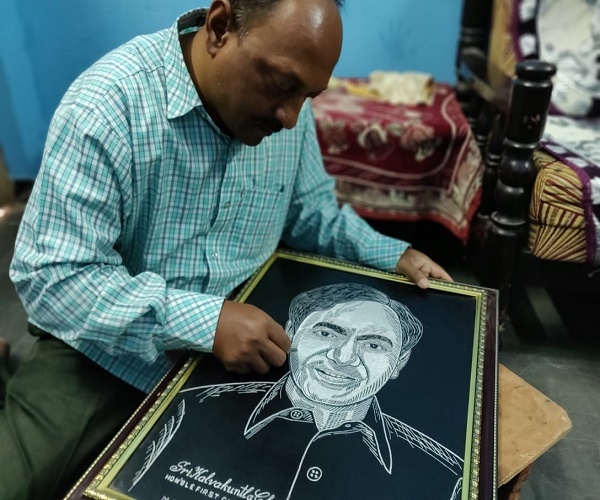 Mohammad Abdul Wasif has an arduous task at hand. Shabbir Ahmed, his father, has passed him the baton to finish engraving the holy book of Quran, which, if completed, would create a record of sorts. For five generations, Wasif’s forefathers had been the official engravers for the Nizams in Hyderabad. Following their footsteps, Wasif says his father started the project well aware of the fact he wouldn’t be able to complete it in his lifetime.

“He is not at the prime of his health. He can hear only partially. He works with the metal plaques for an hour or two a day. My brother Mohammad Abdul Kareem and I have promised our father that we will carry forward his labour,” Wasif says.

Shabbir Ahmed’s forefathers were engravers and designed logos and emblems for the Asaf Jahi dynasty and their departments.

“Every member of the royal family then had an emblem of their own. From the last seven generations, my family had been serving the royals. They engraved names and signs on the firearms of the Nizams and made many ornaments, pots, utensils and vessels in gold, silver and other metals. Even after the annexation of Hyderabad, my grandfather and his brothers provided their services to Prince Muffakham Jah and Prince Mukarram Jah. From manufacturing sherwani buttons (bidari) to designing the Nizam and even the erstwhile Andhra Pradesh government’s emblems and logos, our family had been always close to the state machinery,” says Wasif.

A resident of Tappachabutra, Shabbir Ahmed, who was the chief designer at the government printing press in Chanchalguda, began engraving the Quran on metal plaques almost a decade ago. Even at 70, with steady hands, Shabbir still works with his tools for an hour every day.

They duo engrave the holy verses on 18-gauge 17×12 inch plaques, on both sides. So far, Shabbir and Wasif have completed 28 plates, out of probably 300 which are required to finish engraving the entire Quran.

“To engrave the verses, an iron plate is fixed on to a frame and a lump of clay called ‘raal’ is used. A photocopy of a page of the Quran is pasted on the lump of clay for making impressions of the letters using dots, after which we begin incision (engraving) with small sieves,” Wasif explains.

Before starting the work, Wasif says they do the wadhu (ablution), which is compulsory before one touches the holy book. Even while putting the metal plaques on display, he doesn’t put it down on the floor, but rests it against a sofa cushion for people to see.

The task is so arduous that Wasif doesn’t finish engraving more than one line a day. When asked why engraving the holy book is important, Wasif says that the Quran has been found on leaf pamphlets, on rocks, on walls but never has anyone taken the pain to engrave it over a piece of metal. “If we manage to complete the project, it will create a record of sorts in the world,” Wasif claims.

ALSO READ:  Do You Know The 'Secrets Of Hyderabad'?

But even Wasif cannot give us a time estimate of when this painstaking task would reach its closure. “I have been spending so much time on it that I have slowly begun using reading glasses to go through the daily newspaper,” he laughs.

Shabbir and his sons are not just skilled engravers but are also proficient portrait sculptures, and their fame goes as far as the White House.

“A few years back, when Barack Obama was the American President, I made a portrait of him and his wife, Michelle Obama, engraved on a metal background, and sent it to the White House through the American embassy in Hyderabad. Surprisingly, we received a thank you note from the White House within a couple of days. I have also made a portrait of Chief Minister K Chandrasekhar Rao and will be presenting it to him very soon,” says Wasif.

Wasif’s collections of portraits range from former Andhra Pradesh Chief Minister YS Rajasekhar Reddy to Princess Diana in England. The portraits are made on a metal background and each facial feature is engraved with precision. Wasif uses different sieves to give lighter and darker strokes to the picture.

The striking resemblance of the portraits of YSR, KCR, Asaduddin Owaisi and Rajiv Gandhi with their originals is a treat to one’s eyes.

“Luckily, I was able to present YSR his portrait when he visited Hyderabad in the early 2000s. He was quite happy and told us to keep the art alive. Words are that all we get in return for the hours of labour we put. Last time I was almost about to gift the portrait to KCR while on stage with him, but due to some last minute confusion, only the box in which the portrait was packed reached the CM,” Wasif says.

Wasif and his brother are the last generation in the family who would keep the art of engraving alive. Wasif parallelly runs a business for a livelihood and says he doesn’t plan to turn the art into a profession.

“It’s not possible to value these forms of art, which takes months and sometimes even years to materialise. Even If I make it professional, I do not know the basics of marketing. How will I sell my products then?” Wasif asks.

Wasif’s daughter is doing her MBBS while his son is studying to be an engineer. “I have asked them many times to learn the art. But why would they, considering they see that I make zero money out of it? Not every art form can fetch you money.” #KhabarLive