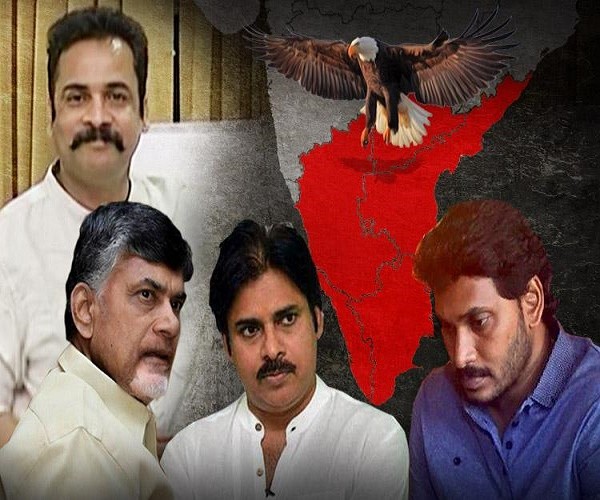 A conspiracy theory by a Tollywood actor seems to have gripped all political parties in Andhra Pradesh, with the ruling TDP, the YSRCP, and the BJP, trading political barbs against each other. In March this year, Telugu actor Sivaji alleged that a national party was trying to take control of the south Indian states, and even dubbed these plans ‘Operation Dravida’.

The incident and the controversy surrounding it even reached the nation’s capital, as BJP leaders from the state met Union Home Minister Rajnath Singh in New Delhi on Tuesday and demanded actor Sivaji’s arrest, asking that he should be questioned.

Speaking to #KhabarLive after the meet, BJP state vice president S Vishnu Vardhan Reddy said, “Why don’t you add the person (Sivaji) who predicted the attack on Jagan, as a witness in the case? Operation Garuda (in the Telugu states, Operation Dravida is referred to as Operation Garuda) is the creation of the TDP, and the state government is protecting Sivaji.”

Earlier this week, addressing reporters in Delhi, Andhra Pradesh Chief Minister Chandrababu Naidu also legitimised the theory, stating, “I did not want to say it earlier, but things are happening exactly the way the actor predicted.”

It was in March this year that the theory first surfaced when actor Sivaji spoke about ‘Operation Dravida’. While he didn’t directly name the party, it was evident that it was directed at the BJP. He also alleged that two local political parties, presumably the Jana Sena party and the YSRCP, were helping the national party.

In a 20-minute video released to the media, the Tollywood actor also said that each southern state was assigned a code name, with the operation in Andhra Pradesh and Telangana dubbed ‘Operation Garuda’, while it was ‘Operation Kumara’ in Karnataka and ‘Operation Ravana’ in Tamil Nadu and Kerala.

“A year ago, Operation Dravida was explained to me. The target of that party is to bring all of south India under its grip by 2019. As a citizen of the state, I felt duty-bound to share this since it will impact the future of the state. If you ask me why I should be trusted, I don’t have an answer. It’s up to you,” Sivaji had told reporters in March this year.

The actor had once joined the BJP in 2014 but later had a fallout, and even went on a fast in 2015 over the Centre’s move of going back on its promise to grant Special Category Status (SCS) to Andhra Pradesh.

In the video, Sivaji also claimed that a new party and a regional party, would join hands and defeat the major local party in 2019, following which the national party would put its plan into action.

Sivaji had claimed that the ‘new party’ chief would be offered the post of a Union Minister, while the head of the regional party would be sent to jail for existing cases that he is fighting in court, following which a Telugu leader from the national party would take charge.

He alleged that this information had been passed on to him by someone who claimed himself to be ‘Kalyan ji.’

The theory was back in the news since the attack on YSRCP chief Jagan Mohan Reddy, inside the Visakhapatnam airport, last week. Jagan was attacked by a man identified as Srinivas, a waiter working at a restaurant at the airport, on October 25. He was scheduled to leave for Hyderabad and was waiting in the VIP lounge. The accused claimed to be his fan and approached him for a selfie, and then attacked Jagan.

In his video, Sivaji had claimed that there would be a ‘life-threatening attack’ on the head of the regional party, which would trigger a political turmoil in the state, causing trouble for the ruling party. However, he had also claimed in the video that the state government would dissolve by September 1, which has not happened.

The BJP has been repeatedly going after Sivaji, with the party MLA P Manikyala Rao even meeting then Andhra Pradesh Director General of Police (DGP) Mannam Malakondaiah in March this year and filing a complaint. In a press release at the time, Manikyala questioned the allegations by Sivaji and demanded a thorough inquiry into the actor’s claims.

Meanwhile, TDP leaders in the state have been claiming that Sivaji’s predictions and claims were coming true and have accused the YSRCP and Pawan Kalyan’s Jana Sena Party of colluding with the BJP to overthrow the state government.

Reiterating the claim earlier this week, Naidu also told reporters, “With the attack on Jagan, the Centre wanted to destabilise the Andhra government. Is it right? This incident happened in the airport and is a failure of the Centre. You have to review it and not me. Ultimately, the truth will prevail.”

Meanwhile, the YSRCP also joined the bandwagon. Speaking to #KhabarLive in Tirumala on Tuesday, YSRCP leader and Nagari legislator Roja Selvamani said, “A person who is not getting any films first floated this theory, and today, he is suddenly being taken seriously. This means that the TDP is writing the script and is making Sivaji parrot their words. It is Naidu and Nara Lokesh pulling the strings. We must arrest Sivaji and question him. All the details will come out.”

Sivaji has not been staying quiet through all this, releasing multiple videos on social media. In his latest video, Sivaji refuted allegations that he had run away to the US since he was afraid of being questioned by authorities.

“I am surprised at allegations that I have run away and that I’m being funded by Naidu. It was a pre-planned event and I have come here on my own money. I will return immediately if investigative agencies summon me,” he said.

He also added that he only wanted to convey to the people of the state about the plan by a political party in Delhi and expose the local leaders who were ‘licking their boots’.

“I will be back on November 10. Be ready. I am ready to face any consequences but I will continue fighting for Andhra Pradesh’s interests,” he said. #KhabarLive