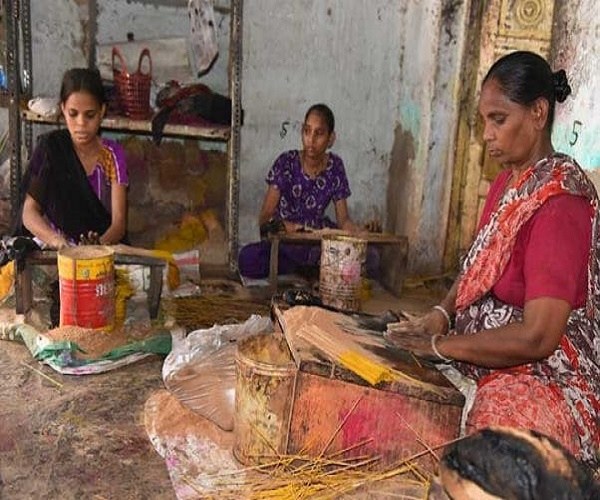 Agarbatti use is a daily affair in every house. The making of manual agarbatti is fading out due to machines anf new texhnology. Many people in old city lost their bread and butter from this traditional profession since Nizams era.

The sight of rows of incense sticks placed on streets in the sunlight, and groups of women coming together to roll out agarbattis in dingy workshops located in the labyrinthine lanes of Amannagar, will soon be a thing of the past. Thanks to automation in the form of incense stick-making machines, the hands will now stop rolling agarbattis.

Introduced a few years ago, the mechanisation of incense stick manufacturing process has taken a toll on the agarbatti cottage industry that once employed hundreds of women in Hyderabad.

“Big businessmen took orders from companies and supplied incense sticks to them. The work of rolling the sticks was handed over to middlemen who had established their units in slum settlements and enrolled local women for the task of making incense sticks,” says Ameena Bee, a woman in her 50s, who says she has spent close to three decades in the vocation.

A few hundred women in Amannagar, a slum settlement located about two km from Charminar, are still involved in making agarbattis. The substance used in making the incense sticks, which include bamboo sticks, agarbatti dust and oil, are supplied to the women by the middlemen.

“First, we prepare a paste of the agarbatti dust and then roll it on the stick. It is a time-consuming process and women do it to supplement their family income. On an average, per day, if a person puts in physical labour for six to seven hours, they can make about 10 to 12 kg of the dust,” says Durdana Bee, who resides in lane no 10, Amannagar.

After machines were introduced on an industrial scale, the product cost decreased, leading to savings for the companies. “Big companies were the first to introduce the machines and later small agarbatti units switched to machines. Now, only a few persons place orders with us and we supply them raw agarbattis. The process of adding scent and packing is done by the company,” said Mohd Farooq, owner of a unit.

He revealed that previously there were around 50-odd agarbatti making units in the thickly populated Amannagar locality. But with the demand decreasing, the numbers have come down to just ten. “A few years from now you won’t find the remaining ones,” he says.

Durdana Bee says that she will continue to pursue the vocation till it lasts. “At 45 years what new vocation can we learn”, she asks. “Till it lasts, we will do it. Later, the almighty will show us a way out,” she says. #KhabarLive