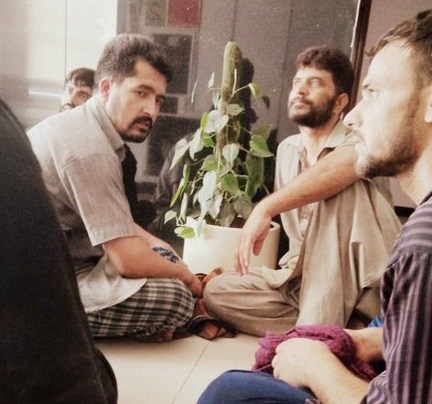 An expression of panic mixed with hope flits across Hamid Ullah’s face every time his mobile phone rings. A Kashmiri earning a living as a porter in Hyderabad, Hamid fervently hopes that the call is from home. The panic stems from anxiety about the state of his family whose lines of communication with the outside world remain completely cut off for the past six days.

“Eid is just a few days away and I have not been able to speak to my family for over 72 hours,” says Hamid, who hails from Anantnag, sitting outside the local Masjid in Secunderabad railway station. “What is happening in the valley? Is my family safe, or dead? These thoughts worry me all the time. They can’t call me. My calls to them are blocked. It is a nightmare for me and my family in the valley”.

Hamid’s family include both parents, a younger brother, wife and four children, two boys and two girls. He has a small land holding back home and manages to send Rs 7,000 to 8,000 every month to his family through his SBI account.

Besides the yearly visit home for Eid, the mobile phone was the main means for these migrant labourers to keep in touch with the families they left behind. And it is the complete shutdown of mobile links that is troubling them the most.

“The central government has not done the right thing,” said an angry and frustrated Manzoor Khan, 28, a graduate from Anantnag. “They knew Eid was coming as was August 15. The Prime Minister or Amit Shah could have waited for our festival to pass and then taken the decision. This will only aggravate the situation. I wish Kashmir gets peace and harmony, Insha’Allah! Though signs are not positive right now”.

The same anxiety and disquiet prevail among all the 7000-8000 Kashmiri porters in Hyderabad. Fondly called “khans”, these sturdy Kashmiri porters provide a key service to residents and tourists. Strapped with ropes on their backs, they work day and night, carrying necessities like LPG cylinders, food rations, furniture, luggage, household goods like TVs, refrigerators and washing machines, in fact any heavy load, that needs to be carried up and down the hilly paths, slopes and stairs.

All of them Muslims, most hail from three districts, Anantnag, Kulgam and Kupwara. A majority of the porters stay at Masjid’s ‘musafirkhana’ — a transit lodge located in the town’s regimental bazaar area, where they are provided bedding and blankets. Others stay in groups in small basement shelters in Ghansi Bazar, Picket area and near the railway station.

There is no written record or account as to when Kashmiri porters started coming in to Hyderabad. But after militancy increased in the valley, their numbers increased. Hyderabad police maintains complete records of all Kashmiri porters working in the city. “It’s mandatory for every porter from Kashmir to get a registration number from the local authority. SHOs maintain a comprehensive register with photograph and address of every Kashmiri porter living in the area under him,” said a DCP rank officer.

Like Hamid, Ghulam Hasan from Anantnag, who said he had been a porter in Hyderabad for 10 years. “I never missed Eid with my family. This time, sadly, politics, not militancy, has led to this. Phones are down and vehicular mobility to Kashmir is suspended. There is no contact with my family for the past four days. Eid is important in our lives but has been ruined completely. My family will not be able to do shopping or call friends. I have not been able to send them any money for this,” said a teary eyed Ghulam Hasan.

His family back home include his wife, two sons, one of them married, and a daughter studying in a local school. But after the PM’s broadcast on August 8th, Ghulam Hasan is hopeful that he will be able to get home for Eid. “The PM has said arrangements will be made for those wanting to get back to their families on Eid. I am keeping my fingers crossed. But till phones lines are restored I can’t tell my family my plans”.

ALSO READ:  Hyderabad, A Place Of Crafts, Conquerors And Continuum

The scrapping of Article 370 and Jammu and Kashmir becoming a union territory have created a piquant situation for these porters just as they were planning to return to the valley for Eid. Given the curfew like situation and the heavy deployment of security forces, porters like Adil Hussain, 31, feel that even if they manged to go to Kashmir, “the festival has lost its fervour due to the Centre’s decision”.

A father of two, a son aged seven and a five-year-old daughter, Adil who has been in Hyderabad for the past three years visiting his family once or twice a year, says his worry is not that he may not be able to join his family on Eid but the long-term impact of the Modi government’s move. Yet, he hopes that the Centre’s decision will bring about peace, development and creation of employment avenues, as promised by Union home minister Amit Shah in Parliament.

Adil squarely blames the Kashmiri political leadership and “some families which ruled and looted Kashmir. That is why we are in Hyderabad, away from our families and children to earn meagre livelihoods”.

Akhil Ahmad, who has been a porter in Secunderabad for the past three years reels out names of at least 12 to 13 young men from Kashmir who are doing porters job despite being post-graduates. “It’s only because there are no jobs in Kashmir,” says Akhil. “Those who stay back fall in the trap of militants, who keep brain-washing the educated unemployed youth and recruit them. It is better to earn Rs 10,000 to 12,000 a month in a peaceful city than losing out to vested interests”.

Many of the porters #KhabarLive talked to were not willing to speak out openly on the scrapping of Article 370 and its impact on Kashmir. But not Subzar Ahmad Tantrey, 23, who came to Hyderabad two years back, and minces no words in holding the two main regional parties National Conference (NC) and PDP responsible for bringing Kashmir to this stage.

“They will go to hell, they made Kashmir, known as Jannat (heaven) on earth into hell,” added Akhil. “They ruined the lives of poor people. What have they given us? We are not a poverty-ridden state. We have lands to cultivate and schools and colleges for education. But there were no jobs and corruption was at its peak. We chose to embrace hardship as we work in hard hot days in summer, cold days in winters and rains in Hyderabad, which is an oasis of peace. Money saved goes back to our families”.

Besides providing unskilled labour, some Kashmiris who came to Hyderabad in the past 25 years have set up businesses. Some sell shawls, some have set up a handloom business, mobile repair vends or started dhabas, meat shops and tea stalls. Besides Shimla, a few have business ventures in other towns of Telangana state.

“The labour market has shrunk,” said Bashir, 43, from Kupwara, who works as porter with a local trader. He also helps tourists with their luggage and at times escorts them to their hotels for a commission from the hoteliers.

The Kashmiris all heap praise on the local communities and traders who, they say, embraced them as brothers and help out in case of need for finances or medical help. “We have always treated Hyderabad as our home and its citizens embrace us as part of Hyderabadi life,” said 56-year-old Feroz. #KhabarLive