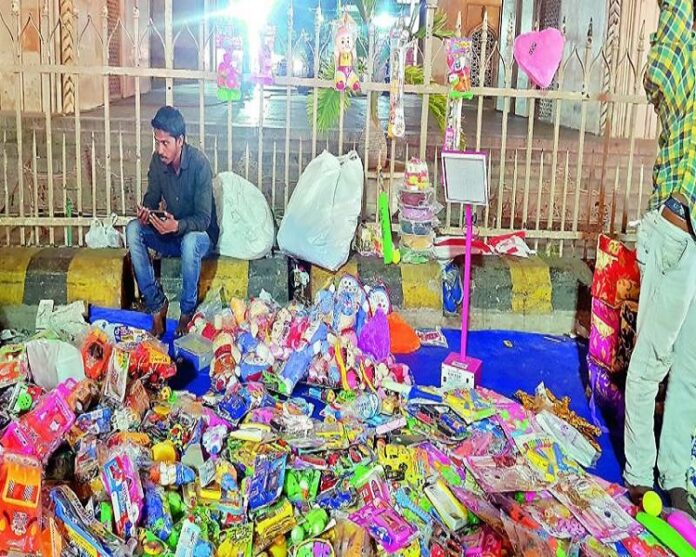 The post-pandemic situation is becoming horrible in terms of rehabilitation and steps to make them atma-nirbhar went in vain due to many factors in Hyderabad.  The street vendors  footpath sellers and hawkers are financially suffering and no help provided to them.

For petty traders, who make a living by selling food items, vegetables, fruits, cheap cosmetic products and all and sundry on their push carts, life has turned topsy-turvy following the outbreak of Covid-19 pandemic.

These traders are yet to come to their normal lives or back to their regular earnings, even after 18 months of malady. Most of these push cart hawkers are settlers from other towns. Many left their families at their hometown and returned to the capital as their earnings dropped drastically.

After the ease of the first lockdown, many lost employment and lot of migrants have not returned, as schools, colleges and offices are still operating from homes.

Vijay Pandit, a resident of Jharkhand, who has a fruit-juice push cart, near Music College, Ramkoti, said, “I have been doing business with this ‘bandi’ since 1993. This city has given me so much. Before the lockdown, I used to make around Rs 2,000 each day, now we don’t even make Rs 500. Almost one year we have been without business. I have four daughters and one son. I left them at our home town as it’s hard to take care of their expenses in the city as of now.”

Bhasker Rao, another push cart vendor, says, “We are in a bad situation, the lockdown pushed us into utter poverty. We believe in hard work and don’t expect any aid from anyone. We just hope things will be back to normal and we get back our business.”

Raju Yadhav, a pani puri vendor, says, “The business is very bad, two lockdowns made our business go down. Customers we used to have before the pandemic rarely visit us.”

It has been seven years since the Street Vendors Act (Protection of Livelihood) came into force, but the vendors in the city say that they are still awaiting the complete implementation of the Act.

Speaking to #KhabarLive, K Naipal Reddy, who runs a tiffin cart in LB Nagar said, “There has been no town-vending committee. Even if the officials conduct a meeting, we are only told where we should put the waste. There is no communication amongst the line departments. The police come and harass us. They give no regard to the fact that we have been given an ID card by the GHMC.  The police throw the card away and say that they do not have any knowledge of the town vending committee.”

There has been no end to harassment from various persons for street vendors. They rue that they have only been issued an ID card by the GHMC and not a street-vending certificate.

“Without the certificate, there is no way of establishing ourselves as street vendors. Every fortnight the police come to our cart and harass us. They usually ask things like, who gave you permission to sell here?” said Venkat Mohan, president, Telangana Street Vendors and Hawkers’ Union.

For those at the Secunderabad station road, vendors like James John said there was supposed to be a committee meeting with the GHMC commissioner. “There is no protection of the street-vendors. We have faced heavy loss due to the lockdown. We are still living under the fear of cops who can come and vacate us at a moment’s notice. Even the ID cards given to us are of no use,” he said.

On the other hand, Hyderabad received ‘Creative City of Gastronomy’ award from UNESCO (United Nations Economic, Social and Cultural Organisation), in 2019 failed to stick to the vital parameter of keeping the importance of hawkers and their efforts in strengthening the urban economy.

The civic body, in its report submitted to the UNESCO, stated that apart from making creative food at affordable prices, the hawker community also added employment for two lakh individuals in the unorganised sector. It also said in the employment generation sector, the IT segment contributed four lakh jobs in the city, which is only restricted to one part of the city. However, apathy of policymakers in the GHMC has been depriving hawkers and vendors of availing PM SVANidhi (PM Street Vendor’s Atma Nirbhar Nidhi), a micro credit scheme for street vendors.

Every year, the Centre promotes setting up vending zones in cities and sanctions funds for the same to municipalities. The GHMC is lagging behind in utilising those funds for promoting and improving street vendors’ business.

According to GHMC officials, a total of 34,878 street vendors in the city who were affected by the Covid-19 lockdown last year were given Rs 10,000 immediate relief by the civic body, the highest in the country. However, almost same number was affected during the current year’s lockdown and the corporation authorities are yet to upload the data into PM SVANidhi.

This apart, non-regularisation of street vendors has left several thousands of them unable to reclaim their ‘vending zones’ after the footpath encroachment removal drive in 2018. A look at the Mission for the Elimination of Poverty in Municipal Areas (MEPMA) figures brings to light that there are 69,331 street vendors in Telangana of which more than 24,000 street vendors reside in the GHMC limits. These vendors were expected to do their businesses in the 750 free vending zones identified by respective urban local bodies, most of which are located at specific areas, defeating the purpose of wide scale inclusion.

There are only 300 restricted vending zones created while there are over 200 no vending-zones. The GHMC is yet to ascertain the exact number of vending zones, as per MEPMA data. On the contrary, the GHMC data suggests, till date, the municipal corporation has identified over 1.56 lakh street vendors in its limits and issued identity cards to nearly 1.44 lakh of them.

The GHMC may be leading in terms of issuing identity cards to street vendors, but the same spirit is missing when it comes to setting up vending zones for street vendors. However, the GHMC claimed that the demarcation of 138 vending zones were completed out of a total 152 identified, but could not shift the vendors to these zones till date.

According to the GHMC corporators, the corporation’s enforcement displaced over 50,000 petty hawkers and vendors since 2018 when the civic body embarked on the footpath encroachment removal drive and by levying hefty fines to them which has been continuing till date. #KhabarLive #hydnews