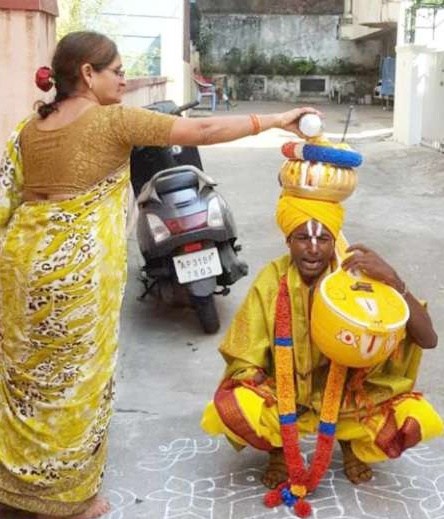 Haridasu – the quintessential Sankranti in bright vibrant saffron attire with colourful garlands and accessories is compared to sage Narada, the eternal and most dedicated devotee of Lord Vishnu. Hailing from a sect of Vaishnavas (devotees of Lord Vishnu), these devotees roam the streets daily chanting the name of the lord throughout the month preceding Sankranti, the Dhanur Masam.

History suggests that the Haridasu tradition began as a part of the Bhakti movement, in an attempt to remind the general public of the glory of Sri Vishnu and to counter the onslaught of ‘foreign’ religions like Buddhism and Jainism.

Haridasulu carry an ‘Akshaya Patram’, a copper vessel, (fashioned like a pumpkin), balanced on their head. They carry `chidathalu’ (cymbals) in one hand, a tambura in the other, tie anklets (gajjelu) to their feet and roam the streets singing, “Harilo Ranga Hari”, keertanas of Ramadasu and the glory of Lord Mahavishnu.

The chidathalu, tambura, and the gajjelu are accompaniments to his songs dedicated to the Lord. The songs they sing, ‘Krishna arpanam’ are mostly written by Sri Ramadasu himself, though the famous tunes of many songs are slightly modified, most probably to keep in sync to the stride of the ever-walking haridasu.

Incredibly, some of the songs sung by them and attributed to the poetry of Sri Ramadasu are not widely known and are passed on within the clan or are learned at the feet of the ‘guru’.

Groups of haridasulu learn under a guru. Each haridasu is allocated with a locality or a village in which he moves around chanting the hari namma across all streets from 6 in the morning to 5 in the evening.

The significant aspect of a haridasu is that he never stops to ask for alms or charity. He does not look back, even if there is any kind of danger behind. In fact, he does not speak at all, only sings eulogies of the lord.

It is only when he is hailed, does he stop. In the rural areas, people respectfully wash his feet, pay their obeisance and seek his blessings. He bends down to allow access to the Akshaya Patra on his head in which people put rice or money.

At the end of the Dhanur Masam, the Haridasulu congregate at Bhadrachalam where all the collections are pooled together and annadanam or free meals for devotees at the temple is organised. As long as they are in this avatar, they eat only once a day in the night.

Contrary to the popular belief that haridasulu are beggars, they are devoted to a unique cause, a cause to revive the name of the lord and remind the layman of the grace of the Almighty. Along with the name of the lord, they also remind one and all to share and donate at least a handful of grains with other.

So this Sankranti, make it a point to mark the festival by celebrating along with a Haridasu. #KhabarLive