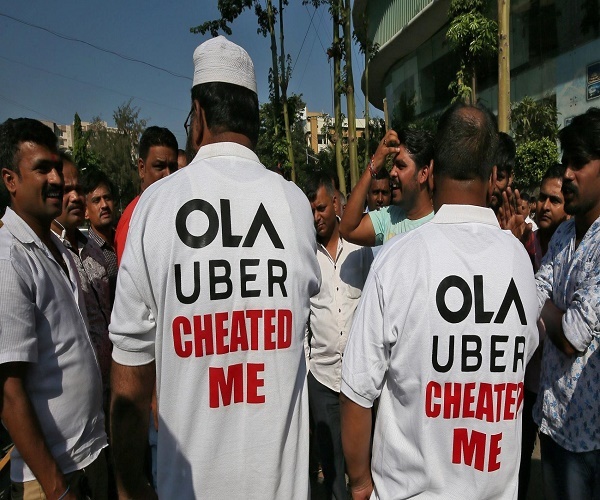 When internet startups first opened for business in India, they seemed like the most lucrative industry to work for. Such was the craze that several educated individuals rebooted their careers to become drivers for Ola and Uber, lured by the prospect of making more money.

But lately, things have taken a turn for the worse. Mumbai’s Ola and Uber drivers were striking for over 10 days in October. The next month, over 200 restaurants in the southern Indian state of Kerala decided to boycott platforms like Zomato and Swiggy. Shortly after, hotels in Ahmedabad in the western state of Gujarat followed suit, refusing to honour bookings from aggregators like MakeMyTrip, Goibibo, and OYO.

This resistance has been simmering for some time now. Back in 2016, sellers on Flipkart went on a day-long strike to protest the e-tailer’s decision to raise commissions across multiple categories to between 10% and 40%.

The root cause was the same: dwindling earnings as app companies, under pressure to turn profitable, charge higher commissions.

This correction has been long due, analysts say. In some cases, these commissions go as high as 40%. So cab drivers, restaurants, and hotels find it unfeasible to do business with these app-based firms. ”Only if the delivery apps reduce their commissions to around 10% will we potentially stop losing so much money,” Suhaib said.

And this correction has been long due, analysts say. “This is the indication that the startup ecosystem is leaving infancy and reaching adolescence. These are growing up problems and most businesses face it,” said Yugal Joshi, vice-president at Texas-based consulting firm Everest Group. “Earlier, anyone with a portal was getting investor funding, but now it will take more than a cool app. It will take a business head and strategic thinking.”

Ola, Uber, Zomato, Swiggy, and MakeMyTrip did not respond to #KhabarLive’s requests for comment. ”We have never charged over 25% franchise fees, do not intend to in the future as well, unless we invest a massive amount of capex in the property, in which case again, we operate within the realms of standard industry practices,” Oyo said in a statement.

Starting off on the wrong foot
Back when these apps first launched, the burden of the asset (i.e. car, restaurant, hotel, etc.) was put on the partners.

For instance, Uber and Ola drivers had to buy their own cars. But because the tech firms relied on foreign investors’ deep pockets to burn cash and discount heavily, they were able to pay handsome incentives and keep commissions low.

“Now that they have critical mass, unit economics, sustainability, and investor returns are becoming more important.” While this was a good strategy to lure people onto the platforms, it was not a sustainable one.

“Offering the worker or partner a higher net take on each transaction was an easy way for them to build up the supply side of their respective businesses,” said Pankaj Jain, a startup investor, founder, and advisor. “Now that they have critical mass, unit economics, sustainability, and investor returns are becoming more important.”

In addition, now these platforms have created a loyal customer base, which drivers and restaurants are heavily dependent on to get customers.

While high-end restaurants and hotels with brand recall could still exist off these platforms—even if it may not be the most lucrative option—”Ola and Uber drivers are entirely reliant on their respective platforms to earn their revenues,” said Anindya Ghose, the Heinz Riehl professor of business at New York University.

A copy-paste model
All this mess stems from the fact that the sharing economy’s model in India was copied and pasted from the West—a drastically different market.

“Over time, people in the US and UK invested in extra assets (houses or cars) that were lying unused. That’s the reason why ideas like Airbnb or Uber worked,” said Sanchit Vir Gogia, chief analyst at Greyhound Research. “In India, we never had the assets and we are breaking our backs to create them—and how far that is sustainable is going to be a huge question mark.”

“In India, we never had the assets and we are breaking our backs to create them”
Once the apps were up-and-running, some of these companies likely misjudged their own cash burn. For instance, the likes of Swiggy, Zomato, or OYO, had the tech rollouts in place but later realised that “local processes on-ground were so broken that investments had to be made for localisation and service standardisation,” Gogia said.

In repair mode
Undeniably, startups have some damage control to do. Already, the commissions charged by such aggregators average between 10% to 25% across sectors, analysts say. These will only go up because the startup business model needs rejigging.

“Unit economies are wrong for everybody in these sectors. For instance, food aggregators are earning Rs60 to Rs70 per delivery, but their fully-loaded costs are about 85 to 90 bucks per delivery,” said Ankur Nigam, a former partner at consulting firm KPMG. “The more you sell, the more you lose. These are not sound business strategies and they have outstayed their welcome.”

Meanwhile, investors, who were initially pumping in truckloads of cash, have begun seeking profitability. “Some of these businesses have been operating in India for five to seven years and many of the investors that funded them are now looking for exits, as the Uber IPO filing suggests,” Jain said. “This would mean fewer investors will be willing to continue underwriting large subsidies.”

Under stress, firms can’t just pile these costs onto consumers. “Indians are too fickle as customers. If Ola raises its price by two bucks, we go to Uber and vice versa. Same with Flipkart-Amazon,” said Nigam. “So vendors or suppliers to these companies bear the burden.” #KhabarLive