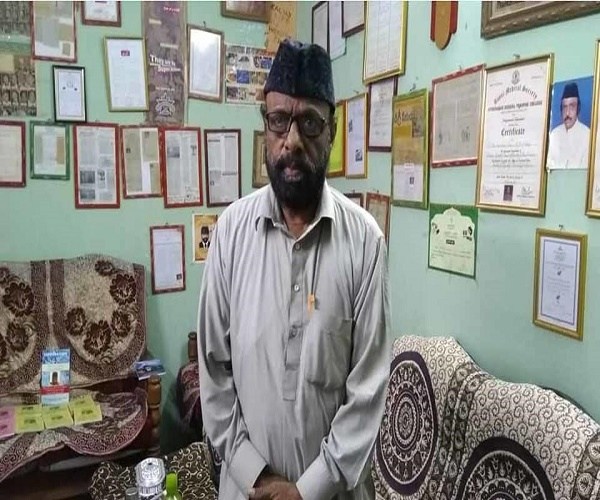 This is the story of a unique personality who want to educate himself with no goal in life. Studied everything but still not got nothing in life, except the knowledge of all. Hence, he is called the opposite proverb – ‘Master of All, Jack of none’.

When #KhabarLive entered the house of 72-year-old man, it would be like entering in a room filled with some kind of odd collection hanging from the walls. But unlike anyone from the City or perhaps at the national level, this Septuagenarian whose name is already registered in Limca Book of Records has all kinds of educational certificates numbering about 3 dozen, along with portraits hanging from walls just like an army man boasting his medals on his uniform.

Meet the man ‘Dr Khaja Fareeduddin Sadiq’ popularly known as ‘degrees man’ in Hyderabad. Sadiq has number of degrees including diploma in various fields like Medical, Engineering, Law, Environmental, Air Ticketing, BCJ and some others numbering about 36.

Speaking to #KhabarLive, Sadiq said that ever since he was a child his hobby remained learning and when all is friends were busy playing, he developed a habit of visiting Central library at Afzal Gunj, where he used to read all kinds of books and spend most of the time. “By early 1960s I completed schooling and in 1968 I completed first graduation in B Sc and after this also completed B Com and later B Ed,” he said.

Job in Saudi Arabia, Returned India
Later he visited to Kingdom of Saudi Arabia (KSA) to perform Umrah, where he got an opportunity to work for Airlines, but he refused and returned back to his home town. After he came back he joined the course of Air ticketing while working in a part time jobs and then he applied for job.

Later, he got the job as Air Ticketing officer in Saudi Arabia there he worked for 6 years and returned back. He regrets that during this period (1968 to 1988) he had to discontinue his studies. After his return from Gulf he also worked for four Government departments like Municipal Corporation, State Excise Department, Secretariat and Revenue Department.

In the year 1988, he took admission in Law college for pursuing Law and later he decided to have a test his luck in other streams and followed his heart with a passion. Starting from late 1980s, he pursued BCJ (Bachelor of Communication Journalism) and started working in Medical field ( and still remained a medical practitioner) after completing RMP (BIUMS).

Amongst other subjects in which he obtained degrees include, Environmental studies, Computer Hardware engineer, Soil Mechanics. In his masters, he complete MA in Urdu literature, History, Archaeology and later M Phil and also did P hD in some other subjects. He last educational qualification remains P hD in year 2005 and now he is applying for the Post Doctorate and want to pursue it from Delhi university.

After receiving degrees in different subjects since 1989, Sadiq remains a man related to medical field. He will be organizing a free medical camp in Hyderabad and other districts as part of his social service where patients will be provided free service. He is also writing thesis for another Ph D course.

On several occasions, he was invited as a guest lecturer in colleges and universities and he also organised a legal camp for the advocates in the recent years. For his social work, he received many an accolades and awards and also gold medals.

Penned several books on poetry and fiction
Apart from this his hobby remains indulgence in poetry and story writing. He also holds a world record in Limca book of record in 2008 for writing one Ghazal in 16,666 stanzas and for releasing 34 books at a single time. In these 34 books, 13,000 stanzas of his poetry were published and remaining is to be published.

Apart from this, Sadiq started focusing on contemporary Islamic literature and penned books, which includes poetry and fiction. He wrote his first book in the year 1999 and till now a total 46 books (including 34 books of Limca Book of Records) were published. “In this month, a new book is also going to released, with the title Mahwar-e-Sadiq.

These books are also available in many libraries including US and for these works I received 6 awards. My poetry has a also a unique feature, where I used one after another all the Urdu alphapets in the beginning of the different poems. All the 36 alphabets of Urdu starting from Alif to Yeh, which is unique as no one has ever attempted”, he said.

He is an ‘international poet’ who has performed in many states in India and other countries including USA and UK. His first poetry which he wrote during his young age was “koshish tu bhi karle Sadiq, Takhqt nahi toh Takhqta hota.” He also wrote a poem related to his degree “rakhne ko to rakhte hai bahut degree Sadiq, par sabko dikhane ka irada nahi rakhte.”