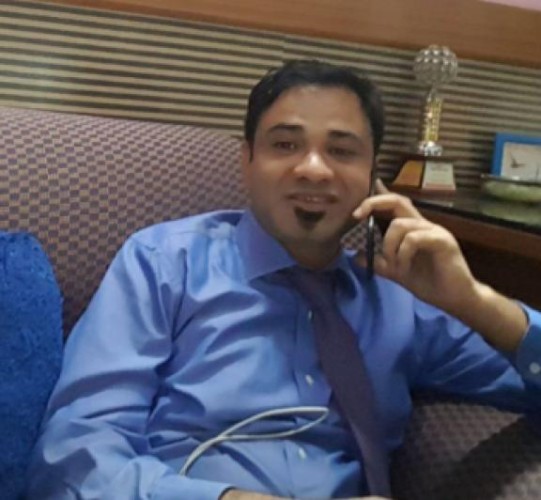 Dr Kafeel Khan the doctor from Gorakhpur jailed by the Adityanath government for eight months without bail, has become a household name in India. Senior Journalist Seema Mustafa spoke to the doctor at some length after his release from jail to find him more confident, less fearful, more determined and pieced together his story from conversations with him, his family and colleagues. Khan now being the more fortunate of the countless innocents so incarcerated, many of them released after decades in prison, if at all. Lives are ruined, futures destroyed by a state and a system that has thrown accountability out of the window.

The story:
This bright, determined young man wanted to be a doctor. His family supported him and he soon left small town Gorakhpur to do his MBBS and then MD at Manipal University in Karnataka. It was a happy time, he was a good student and then worked as a doctor for 12 years in the state, learning “a little Kannada” as he went along.

He then got a fellowship in Australia. He wanted to go but his family wanted him back in Gorakhpur. So he shifted base in 2013, back to Gorakhpur. He joined a well known hospital and started working day and night. He loved his work, and it showed in his dedication to the job. One day in what he counts as his “good fortune” he was sitting in on an interview of applicants with one of these being a young dentist. He fell in love, approached her family, they got married in 2015. And soon had their first child, a pretty little daughter.

Life was peaceful, and complacent. It all set into a nice routine. He would leave for the hospital early morning, take a post graduate class, do the round of the wards, another class and so on. His was a joint family, with his brothers, their wives and children, and a widowed mother.

The government changed but this did not impact on the doctor. For him work was work and patients, patients. The new chief minister, also from Gorakhpur, was set to visit the hospital for the inauguration of a new High Dependency Unit in the encephalitis ward. The doctor was as busy as the rest preparing for the high profile visit. It passed successfully. The next day, that is August 10, 2017 he took a day off to relax after the tension and work of the past several days.

The day was uneventful. In the evening he saw a message on a doctors group from a senior resident that there was a problem. He spoke to the resident and was told that the oxygen supply was running out, crucial for encephalitis patients. He panicked and started calling seniors in the hospital. The Principal was on leave, and to cut a long story short he did not get the response required. He rushed to the hospital as being a father of a little girl, he knew he could not let the children die.

The supply from the oxygen supplier had stopped because of non payment of dues. One little girl with zero oxygen started bleeding despite all efforts. Her parent started screaming and crying, and with them the team of doctors and nurses too wept. There are figures of how many children died each day, 13 to 30 became the average. It was an unusually high number of deaths by any standard in the hospital. The doctor used all the connections he had to get oxygen into the hospital. He worked along with others day and night to somehow save lives over the next three days. The media circling the hospital as news of the deaths leaked out, noticed this conscientious doctor on almost 24 hour duty. Some spoke to him, others reported about him. He was cornered to give interviews and while he did not say much, he did say that there was a major shortage of oxygen and the children were being impacted.

There was tension in the hospital as the families were highly emotional and the medical teams were worried that they would be beaten up as children continued to die.

Everyone in the hospital was witness to this. The headline changed to ‘60 children dead’. There was a national outcry, and soon the CM had to rush to the hospital after his health minister made a bit of a mess of his visit. The CM was angry about the bad publicity. He was furious. And while most seniors were on leave, or others had stayed at home and subsequently taken leave, this young doctor was very visible. The CM blasted him and made it clear that he had done no good, but in fact the reverse by trying to be a “hero.” The doctor did not know what had hit him. Instead of a word of appreciation he was being threatened.

It was clear from that moment that he was under threat. More so as the CM was not known for his compassion or efficiency but for ‘encounters’ that he and his police were boasting of. After his threat to the doctor, others told him to watch out. You will disappear in an encounter, people told him. Terrified out of his wits, the doctor left for Delhi thinking that perhaps he would be safe there. The police started entering his house, harassing his family, abusing and threatening. Over 30 to 40 cops would enter the house at midnight, walk all around, and hurl abuses even at the women folk.

In Lucknow they caught the doctors brother. He then surrendered, still not really understanding what crime he had committed, why did he run away, and now why had he surrendered.

He was taken to a government guest house in Gorakhpur and kept there. He was humiliated, and threatened with the choicest of abuse by the UP police. He cowered, terrified that he would be killed. He was sure he would be. Anyways finally he was deposited in Gorakhpur jail. And soon after shifted to a ward —essentially a small room—with 160 inmates. All criminals. They were packed into that room every night for 12 hours 6pm to 6 a.m. They all had to share one broken down, filthy toilet. There was no door and everything done was in full view of all the others.

The doctor was hopeful that he would be released on bail at least. Soon. But as the days turned into months, he realised this was not going to be easy. He was sure that he was not going to be let out till perhaps the five year term of the new government was over, or until after the general elections. He read philosophy and religion to keep himself calm. The depression took hold, and ran deep. He was allowed visitors, but these were curtailed from time to time. His health suffered, his blood pressure ran high. And worst still he lost hope.

During his days in jail he thought about life as he had known it. And he remembered that he had read about one Akhlaq being lynched but said nothing. They he had read of a young Junaid being killed on a train but had done nothing. And now it was clearly his turn. Why God? Have I done something wrong, was the question that went over and over in his mind. And the answer was always in the negative. Why then? Maybe this is a test of endurance for something else. Maybe this has been planned for something larger. He tried to console himself. He had no answers, all he knew was that he had done nothing to merit what he had been served.

His wife ran from pillar to post. She even met the Chief Minister. She tried to tell him how bad the conditions in jail were to which he replied, jail is a jail, he has not gone there to rest.

During the eight months the doctor realised that he had made the mistake of keeping quiet. Of being so terrified that he acted like a fugitive. Why had I run away? I had committed no crime. I should have spoken out the truth instead of being so scared.

He also realised that when in jail only your immediate family stands by you. The others—family and friends and associates disappear as they do not want to attract the ire of the law. Family is the most important, they are the ones who will fight for you, the doctor realised.

And the faceless many who remembered him and who created the pressure following The Citizen report breaking the silence. Large groups were there to receive him when he came out of jail, people he had never met, parents of children who had died and who he had been able to save, with garlands, with hugs and love. He had never felt so good. But he was exhausted, mentally drained, emotionally dead, physically sick. He just wanted to go home.

He did. His old mother burst into tears as he hugged her. He wept copiously. His wife and little girl and brothers were by his side constantly.

After one night in his own bed he regained some of the lost confidence. And realised that he had lost the fear along the way. And that he was more fortunate than many others in a destiny that was not just his, but intertwined with all those who have spent years and years in jail, innocent, waiting for release. #KhabarLive