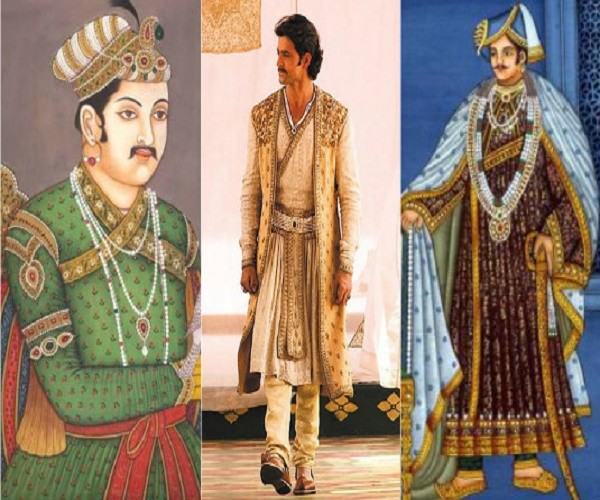 The sherwani that Mahbub Ali Khan wore evolved from the achkan with elements from Edwardian and Victorian frock coat. The sherwani like the saree is the embodiment of Indian fashion for men. Its origins are seeped in history and it is still an extremely popular garment for Indian men at formal occasions especially weddings.

The jacket style coat has been through several transformations over time but its basic silhouette has remained largely unchanged. The constant shape is foreseeable because men’s fashion has a tendency to stagnant in all cultures. Men’s fashion has always been more practical rather than aesthetic and its slow paced evolution can be written off to men’s general unwillingness to experiment with fashion.

Today’s men maybe more eager to adopt trends and aren’t afraid of standing out for their innate sense of style because it’s no longer considered effeminate to be well groomed and impeccably dressed. It’s a shift in consciousness towards men’s fashion that comes about very rarely and is frequently followed by periods of slow or no transformation. The sherwani too has followed a similar journey from its inception until its present day version.

Mughal Sherwani
The sherwani’s origins can be traced back to the 16th and 17th centuries in Central Asia when it was the preferred dress code of the Turkish and Persian nobility in the Delhi Sultanate and Mughal Empire. It seems an odd choice of attire in the oppressive Indian heat but the foreign rulers were insistent on maintaining the traditions and cultures of their homeland. Also most noblemen and royals owned several palaces and always retired to the cooler climes of North India in the summer months. This trend was most prevalent in the reign of Babar (1526-1530) when the men wore a Chafan (Long Coat) and Postin (Sheepskin Coat) to retain the costumes of their homeland Turkestan. Unsurprisingly then the sherwani had not trickled down to the masses who were toiling in the fields or were involved in some other form of manual labour through the sweltering heat.

It was the reign of Akbar that saw a confluence of Persian Muslim and Hindu styling in clothes. Emperor Akbar took a keen interest in fashioning court costumes and even went as far as romanticising old names of clothing to newer terms. The Shawl was renamed as Paramnaram meaning ‘extremely soft’ while the Burqa and Hijab were renamed as Chitragupata that meant ‘hiding the face’. The Jama was retitled as Sarbgati meaning ‘covering the entire body’ and it was the Jama worn by men that became the foundation for the modern day sherwani.

Jama-like coats were first donned in the time of the Kushans or Scythians and disappeared soon after. These coats were refashioned and brought back by Emperor Akbar especially for the men in his Mughal court in the 16th century. Akbar’s restyled version did not have slits and featured a rounded hemline and fuller skirt. The new version was called the Chak-Daar-Jama. The open jacket style garment was fastened with a fabric belt called Patka that was often hand woven with intricate and complex designs. The sash like belt was also used to suspend bejewelled swords. The Chak-Daar-Jama went on to become the official court costume for men in Akbar’s court. Even though the Chak-Daar-Jama was a fusion of both Hindu and Muslim faiths, Akbar ordered the Hindus to fasten theirs on the left as per their traditions and the Muslims to tie theirs on the right to maintain distinction but also respect their religions.

Akbar’s keen interest in bringing together both faiths and uniting the country by creating a common silhouette for noblemen was one of the cornerstones to the development of the sherwani as we know it today. It was also a time when Indian men’s fashion was at its most ostentatious and at par with women’s fashion. Mughal men’s clothing was created from luxurious fabrics like silks, mulmul and brocade and they also wore large pieces of jewellery especially necklaces just like Mughal women. The period was one of the finest in terms of evolution of men’s fashion. The era was beautifully depicted in the movie Jodha-Akbar where Bollywood superstar Hrithik Roshan played Emperor Akbar and wore costumes that were painstakingly researched and flawlessly recreated by ace designer Neeta Lulla.

The Mughal endeavour of unifying all of India’s smaller warring princely states under one rule resulted in the birth of India as a country. This union affected Indian fashion in a way that the reinvention of the Chak-Daar-Jama cemented the position of the earliest style of sherwani into the wardrobes of Royal families across India. It was also the first peak in the evolution of Indian men’s fashion, which was followed by a phase of limited to negligible changes.

As the Mughal rule ended and the British colonised India, the sherwani went through another metamorphosis. The voluminous skirt and rounded hemlines were streamlined into more structured fitted jackets resembling British frock coats worn by East India officials and the British military. Sherwani silhouettes evolved from the open jacket into styles with double-breasted buttons, collars, lapels and closed collars. These sherwani styles were no longer only for Indian royalty as prosperous businessmen, artists, bankers and others from more affluent means started adopting the garment.

ALSO READ:  The Terror Of Board Exams Is Killing India’s Future And Spreading Unrest

British Sherwani
Towards the end of the British rule the sherwani became the symbol of ethnic pride in Indian men. The many upheavals of the freedom struggle especially the Aligarh movement saw many revolutionaries wearing the garment as they rejected Britsh made clothing and cloth. Sherwanis became plain jackets without any embellishments and were often made from solid coloured fabrics. Many influential Indian leaders like Jawaharlal Nehru and Jinnah adopted the simple closed collar or bandhgala style sherwani as their signature look prompting many Indian men to do the same.

Freedom Fighters
The sherwani styles from the British era and the Independence movement remained prevalent and are still worn by Indian men. The emergence of Indian fashion designers and Bollywood movies has resulted in more embellished versions of the sherwani with various fabrics, colours and silhouettes. Indian grooms often wear sherwanis for their wedding day, as it is still a significant symbol of the rich heritage of India. It is also the garment of choice for Indian men attending weddings for close friends and family. Modern sherwanis are no longer restricted to being worn over churidhars as fashion designers have experimented with sherwanis teamed with fitted trousers, dhotis, patiala salwaars even draped lungis.

Nizams Sherwanis
It is a known fact that the Sixth Nizam Mahbub Ali Khan had a taste for the good things in life. Visitors to the Nizam’s Museum in Purani Haveli area of Hyderabad are stunned to see the walk-in wardrobe that appears endless. “He never repeated a dress,” is the whispered word. But new research has spotlighted his role in the evolution of the sherwani which is now the dress of choice during weddings and is preferred by the political class during ceremonial occasions. Former prime minister Jawaharlal Nehru even used the sherwani as a style statement during his visits to various foreign countries and events in India. Soldiers of the Pakistani Army are allowed to wear it for various events.

But it was on January 24, 1893, perhaps at 4 pm, that the world got its first memorable glimpse of the sherwani when Mahbub Ali Khan wore it and sat down with Archduke Franz Ferdinand of Austria, then travelling in India, for a post-lunch photograph by the team of Raja Deen Dayal at the Chowmahalla Palace. History was made. According to a Ph D thesis by Toolika Gupta, the photograph is the first evidence of sherwani being used as it evolved from achkan. The achkan itself evolved from a garment called angarakha with the addition of buttons which were a European novelty.

The Lucknow historian Abdul Halim Sharar who spent a few years in Hyderabad tutoring the sons of a Paigah nobleman wrote about the evolution: “The achkan was extremely popular and the style started to find its way from the towns to the villages. In a very short time it was worn throughout India. In Hyderabad, it developed, with a few alterations, into the sherwani. Its sleeves were made like those of an English coat, the adornments over the chest were discarded and for the lower part the shape of an English overcoat was adopted. It became so popular everywhere, including Lucknow, that it is now the national dress of all Hindus and Muslims in India.”

While the achkan is the gift of the nobility from Lucknow, Hyderabad can lay claim on the ownership of the sherwani. The sherwani was a gradual evolution of angarakha which had laces on either the right or left shoulder to tie up the flaps. A similar garment would be a women’s kurti with the cut not in the middle but across the right or left shoulder. But the sherwani revolution happened when the buttons moved to the centre and the oriental dress appeared like a version of frock coat which was popular during Edwardian and Victorian eras in England. One only has to think of Darcy and Bingley in Jane Austen’s Pride and Prejudice for the frock coat (some of the more popular illustrations were done by Hugh Thomson in 1894).

The 28-year-old Nizam who was a fashionista naturally adapted the trend, though Archduke Ferdinand remarks: “He always wears European dress; most of the times he is in a black frock coat and the only native piece preserved in his costume is a turban-like cap made out of yellow cloth with a golden tassel. He never takes off this headdress.” But for casual events, the Nizam knew the comfort factor in Indian clothes.

It was just perfect that it was in a kingdom where the British mingled with Indians with absolute freedom that the sherwani evolved. #KhabarLive