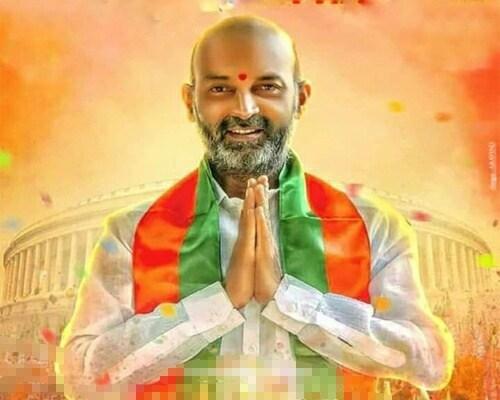 The Telangana BJP claimed that the Ali India Majlis Ittehadul Muslimeen (AIMIM) has open “sympathies” for terrorists and undertakes events in their support in its bastion of Hyderabad. The newly-appointed president Bandi Sanjay Kumar said that the AIMIM should be banned for its link to “violence and terrorists” and claimed Congress workers will join their party in large numbers as their party was staring at “disintegration” in the state.

Appointed as the state party chief last week, the first time Lok Sabha MP sees himself as a “fighter” for Hindutva ideals and accused the ruling Telangana Rashtra Samithi (TRS) of joining hands with the Asaduddin Owaisi-led AIMIM, which has strong presence in Hyderabad, to instigate violence during protests against the Citizenship (Amendment) Act.

“We (BJP) will soon launch a state-wide exercise highlighting the nexus between the TRS and the AIMIM for sheer vote bank politics. The AIMIM is essentially a party of terrorists,” Kumar alleged, stating that Owaisi’s party should be banned.

Speaking to #KhabarLive in an informal chat, Kumar, 48, accused the K Chandrasekhar Rao-led Telangana government of renaming a host of central dispensation schemes to “mislead” people and alleged a scam involving diversion of funds provided by the Centre.

Associated with the Rashtriya Swayamsevak Sangh (RSS) since a very young age, the state BJP chief has risen through the saffron ranks, holding a number of organisational posts in the party and its youth wing, BJYM, earlier.

He was a corporator before winning his maiden Lok Sabha poll in 2019. Kumar mentions with pride that he was jailed for at least seven times between 2005 and 2011 during agitation over a variety of Hindutva issues.

His strongest words are reserved for the All India Majlis-e-Ittehad-ul-Muslimeen (AIMIM), which has grown over the last few years outside its traditional base of Hyderabad with its unsparing attacks on the BJP, especially over its Hindutva planks.

The Owaisi-led party has won a few seats in states like Maharashtra and Bihar in regions with large Muslim population.

“The AIMIM should be banned. I will work for it,” Kumar said.

Asked about Owaisi’s condemnation of terrorist organisations in his speeches in parliament, the Telangana BJP chief claimed this is all “acting”.

The party, he claimed, has open “sympathies” for terrorists and undertakes events in their support in its bastion of old Hyderabad.

In the 2019 Lok Sabha polls, the TRS, Congress and the BJP won nine, three and four seats, respectively. The vote share of the Congress was higher than that of the saffron party in the elections.

Kumar, however, asserted that the Congress has only weakened since then as it is in a state of “internal war”.

“It is looking at disintegration. The Congress will cease to exist in the state soon. Many of its leaders and workers have joined us. Its rank and file will merge into our party to take on the TRS as the BJP is the only alternative,” he said.

The TRS, he added, has only made false promises and its development claims are bogus. It claimed that its government has built 97,000 houses for the poor but not released the list of beneficiaries, Kumar said, claiming the real number is barely 5,000. #KhabarLive