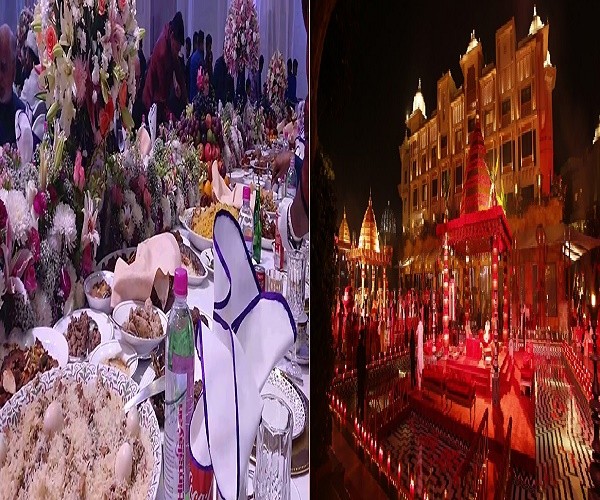 Exorbitant weddings have become the bane of Hyderabad’s Muslim society, with the community ending up spendig thousands of crores of rupees on lavish banquets, dowry and ostentatious ceremonies

Despite the ravages of time, Hyderabad, Hyderabadi attire, language, cuisine and traditions remain as exotic, charming and appealing as they had been during the days of the legendary Nizams, the Nawabs and the aristocracy.

One such institution, the Hyderabadi Muslim wedding has lately come under closer scrutiny, as the simple pact of bonding man and woman into sacred relationship of husband and wife, has become so vulgarly extravagant that community elders, journalists, social workers, Ulema and even few politicians have come out strongly against the growing number of “fat Muslim weddings” that cost around Rs 75 to 80 lakhs, and in some cases even up to a crore. From boycotting to staging protests against lavish and extravagant marriages is now on the cards.

The phenomenon is not restricted to the well-heeled and the neo-rich, but has afflicted the poor of the community who bend over backwards to keep up with the Joneses, and fall willingly in the clutches of ruthless loan sharks, pawning and pledging whatever meager resources they have to match the others. Not to mention the upper and lower middle classes who rush to banks for the money to be in the rat race, ending up in huge debts. While many such marriages end up on the rocks. (press report. Five in every 1000 Muslim women vulnerable to divorce).

Qasim Bi, a 50-year old maid is doing rounds of a housing complex she works, carrying a wedding card of her daughter’s wedding to a footwear salesman. Along with the pricey fancy invitation card, she also presents a paan( beetle leave) soiled paper listing demands her would be son-in-law is making. She pleads for contributions to help her buy as much of the demands she can. The other option she gives, is, at least provide an item from the list.

One of the requirements is, demand to feed 300 guests Biryani and three other dishes. “300 guest”! I asked her in amazement, “do you have so many relatives and friends, do you know the cost to feed them.”

The answer was rattling.Cool and relaxed, she replied, “Saab aap log bhi bohut logon ko bulatey na. Saab kya karna aaj kal yeich chalrah, dena padhta naa, subich deraen.” (Sir, you people also invite lot many guests. What to do; this is the trend nowadays. Everyone is doing it, I have to do it to).

This desire of keeping standards in social recognition to peers is the root cause of the huge amount of money being spent in weddings that is eating away into funds that can be diverted to more constructive ventures benefiting the community.

A local Muslim welfare organization puts the cost of these lavish weddings anywhere between Rs 3,500 to 4,000 crores per year. However, there is no definite mechanism to determine the actual amount. The estimate could even go up to over Rs 5,000 crores or more, as jewelry and other valuable exchanged between the bride and bridegroom are close kept secrets to keep the taxman away.

Once upon a time marriages in Hyderabad, with the exception of a few of the rich nobility and aristocracy, were a simple affair. Held in homes and nearby open spaces under shamianas (tents).The flip side, the amplified Bollywood wedding songs played late into the night to the nuisance of the neighbors.

The bride’s side provided guests a cup of tea with the famed Osmania biscuits after the nikah ceremony,that would be over by evening. Guests close to the bride and bridegroom’s family would be furtively asked to stay back for a special at home. And special food for about twenty or thirty people or more depending on status would be packed and handed over to the bridegroom’s entourage at the time of Vidai (ceremonial departure of bride for her husband’s home). That was all about affordable common and normal marriage up until the mid-sixties, performed free of any status anxiety.

Old Hyderabadi households tell the cost of the wedding could be Rs 100,000 to 300,000. The dowry and mehr were more or less a private affair. Furniture and other bridal paraphernalia, mostly household items of daily use would be dispatched along with the bridegroom’s entourage returning in a baaraat with the bride in a fancy palanquin carried by helpers and the bridegroom on a caparisoned horse, in blazing brightness of gas lamps as accompanying band played Bollywood tunes.

These weddings were symbolic of a family’s standing in social circles and society reflecting family’s name and respect, and would run into days, simple, informal involving the high and low of the neighborhood .

As time passed and with increased affordability the tea and biscuit got improvised with a slab of ice cream. Then the ice cream also disappeared giving way to traditional biryani with a couple of side dishes and sweet dish of either qhobanee or double ka meetha (Apricot and bread pudding). And then came the petrodollar loaded Gulf nawabs, taking the nascent trend of holding weddings in marriage halls and multiple menus to newer heights.

Hiring event management companies, expensive orchestras, celebrity crooners, reputed professional photographers, designer outfits for bride and bridegroom costing lakhs, for just a night’s wear, jasmine and mint leave garlands weighing kilos. Rituals like, Bridal shower, Mehendi and dholki were added on adding to the costs. Incidentally, the famed Falaknuma Palace, abode of the Nizam now leased out to a leading hotel chain, is the latest of the facilities available to whosoever can pay the price.

Behavioral scientists and sociologists have termed this overplay of possessions as desire to define by what one possess in terms of wealth. “It’s ok if for those who can afford, but to live beyond what you have by borrowing is harmful to the community” says a high ranking retired Muslim bank officer.

This demand for social recognition fueled by, “conspicuous consumption” has given birth to a whole new industry, catering to peak season of Muslim weddings starting from 9th month (Ramadan) up to the last month of Zul Hijja (month of Haj) of the Islamic calendar.

According to business sources, there are over 70,000 marriage venues of all kinds, big and small from Mandaps to convention halls, to ball rooms off five star hotels and even some farms and gardens of the rich lying on the out skirts also cater to weddings. About ten of these, say industry sources are super-duper properties.

Prestigious with state-of-the-art facilities with a minimum no fringe rental tag of Rs 1500,000 for a night. Extras like special effect lighted stages for bride and bridegroom, fancy seats, candelabra, liveried butlers and waiters, branded crockery and cutlery, flower arrangements adds up to another Rs 700,000 to 800,000. This does not include the lavish feasts for dinners that could number from a small 500 to over 3,000 guests. The menu surpassing five star dining, with a variety of dishes, could be anywhere between Rs 1500 to 2500 per plate.

The colossal draining of community wealth and resources in weddings, is against the spirit and teachings of Islam, says Islamic scholar, Dr. Rashid Naseem Nadvi, Head, Department of Arabic, Osmania University.

“If Muslims were to adhere to the teaching of Islam in their daily lives, such practices, will never happen. Islam disapproves of extravagance and wastage of any commodity, human resources and energies. It appreciates and encourages development and progress of the society. Muslims should avoid extravagance in marriages and other social functions,” he stresses.

Apart from the religious and moral sanctions on costly wedding and wastage, the large wealth of the community is being diverted away from investments in small scale industry, manufacturing and service industry that could help generate jobs and better the socio economic conditions of the community, says Abid Rasool Khan, Chairman of the Andhra Pradesh Minorities Commission.

Lamenting at the dearth of quality educational institutes and residential schools, Mirza Yawar Baig, President of the Yawar Baig and Associates, global consulting specializing in leadership development and Imam of the Mahmood Habib Masjid and Islamic Center, says if only a quarter of the money spent on weddings were diverted into providing good education, many of the ills and shortcomings faced by the community could be eliminated. #KhabarLive