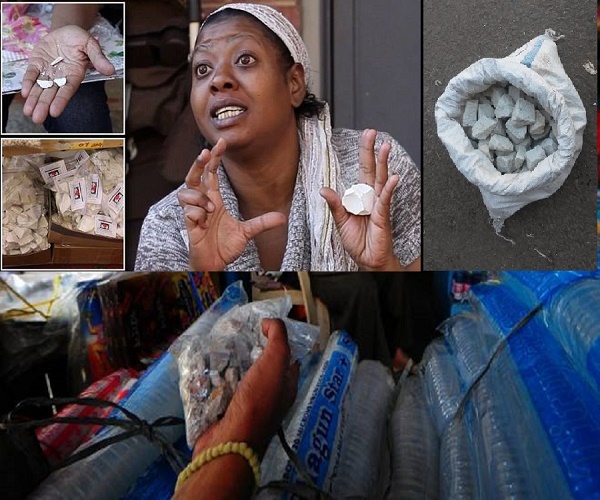 Despite advertising guidelines and campaigns against discrimination based on skin colour, pregnant women follow a generations-old practice of eating ‘limestones’ in the misguided hope of bearing fair-skinned babies.

Savitri Vinayak was stubborn; into her second trimester, she wanted the secret elixir to having a fair-skinned child, which Hyderabad’s cramped grocery stores claim to fulfil and have in large stock. Stepping into a cooped-up kirana store in Begum Bazar, her 37-year-old husband Jatin fulfilled her desire with a perfunctory smile and got it for her.

This is the secret that is hidden within the old city — women here eat treated limestone that is soft enough to chew, in the hope of having fair-skinned children.

The stones, popularly known as khadi, are sourced from Bidar, Karnataka, according to tradesmen. They are broken into pieces, sometimes as small as a peanut, in the busy, ancient lanes of Begum Bazar, the market place established by the Qutub Shahis. Merchants, local and of Rajasthani descent, package the stones in easy-to-carry cones fashioned from old newspapers which they sell to retail buyers. Marwari, Jain, Telugu and Muslim women consume them in order “to lighten the skin colour of the unborn child” and later get addicted to it.

The stones come in pale yellow, white and grey colours for the women to pick and choose from. The taste is bland and easily addictive.

As she queued up near Narender’s store that had a plastic container filled to the brim with khadi, Vinayak, a resident of Begum Bazar, spoke of her craving. “The stone is rich in calcium so it lightens your child’s colour,” she said, revealing her beliefs. “In the evenings, after completing my chores, I look for it. Sometimes even at midnight, I feel the craving.” Vinayak’s eight-year-old daughter, who acquired the habit from her, held on to her mother’s bright red sari helm. Stone eating is a secret that comes to light only within closed circles of women, sometimes passed on from generation to generation.

An uncanny similarity in this habit exists between Hyderabad and Kenya, another country where pregnant women are known to consume copious portions of soft limestone in order to satisfy and subdue midnight cravings and bouts of morning sickness. The soft stones, called Odowa, are sold freely in the Kenyan capital, Nairobi.

But the stone-eating habit carries with it a health threat. In general, the craze for fair skin is what shapes a woman’s diet, which is something that has nutritionists worried. Veena Shatrugna, former deputy director of the National Institute of Nutrition, Hyderabad, finds this to be a common phenomenon. She cites another example, where in most parts of the country, women are told not to have tea or coffee as it could make them dark. “These are the ways in which women forage for nutrients which they need which in turn gives rise to myths. As they find calcium rich food, including milk, a rarity, they go in for variants which they think will be right,” says Shatrugna.

There is also the claim that children born to mothers who eat khadi look not just fair but also a tone lighter, if not paler. “They look bleached. We know it is not good for the mother and child, but who doesn’t want a good-looking child? And, the craving for this tops it all,” says Sangeetha Jain.

In Hyderabad, the khadi supply chain spreads through the veins of the old city — from Begum Bazar, to Purani Haveli and Mozamjahi markets. Each paper cone is priced at Rs.2 and would have less than 20 gm of the so-called secret potion. “We get it supplied along with other consignments as there is a great demand. Women buy stones for Rs.20 to Rs.30 at a go,” says Narender, a shop owner in one of the bylanes of Begum Bazar that links it with Purani Haveli. According to doctors, the amount of khadi consumed here is anything between 20 and 30 kg a day.

In many houses, conversations about “stone eating” often end up in giggles. The women find their addiction to be a matter of routine and queries are met with curiosity. “I ate the stone from my first pregnancy to my last,” says Jyoti Sharma, at her home in Puranapul. Her youngest daughter, Pragati, who is eight, and her elder daughters, Khushi and Pooja, still remember their mother’s habit. As Sharma spoke, her neighbours joined in, all admitting to the practice of khadi eating.

But the quest for fair skin often makes women ignore the dangers of eating khadi — from brittle bones to an upset stomach. “My nephew lost an opportunity for a salesman’s job as he was not fair enough. You get a good job and a suitable matrimonial alliance if you are fair,” Jain said standing outside her husband’s hardware store which once used to sell khadi. Fairness here is not merely about one’s appearance but also about earning a living and landing a better job that will ensure a comfortable lifestyle. “What matters is the skin tone and your angrezi (English),” said Humaira Begum, a bangle maker in Laad Bazar. She still has khadi despite it giving her spells of giddiness and an upset stomach.

Many women in Hyderabad find that their obsession for khadi comes at a price. Women who eat the stone over a period of time lose their appetite. They also develop anaemia and suffer stomach ailments. Severe constipation is common. There are at least 25 to 30 cases of women complaining of stomach ache, giddiness and severe constipation referred to the primary health centre near Puranapul. “The craving is due to calcium deficiency. Some women assert that the stones have more calcium content and eat them, but this is not true,” says Dr. Md Nazeer from a dispensary in Puranapul.

The fairness cream market, that is estimated to be worth Rs.2,700 crore, has not failed to miss the “importance” that lower- and middle-income group women in Hyderabad attach to having a light skin tone. Harish Bijoor of Harish Bijoor Consults, a brand business strategy firm in Bengaluru, finds that the desire for fair skin is linked to a desire for social security. “During the last two decades, the fairness cream market has seen tremendous growth and advertising penetration in special pockets in most cities is strategic and well-researched. The biggest growth the market got was from the marriage market as it defined ‘marriageablity’. The second big growth phase came from the job front where it was projected that if you are fair, you land a better job,” says Bijoor. The growth rate in this segment is between 16 and 17 per cent, he adds.

Advertising, especially by word of mouth, posters and graffiti, has also been a catalyst in fuelling the desire for fair skin in tier one and two cities. The fairness quotient has laid its imprint on the urban market and has percolated to semi-urban and rural markets too, say experts. “The market is based on the desire for such skin and cuts across all sections of society. And the gap between the fair, the brown and the dark that could have been bridged, has only widened with market forces,” Bijoor says.

In reaction to the demand, the Advertising Standards Council of India had, last year, issued guidelines to the advertisers of ‘skin whitening products’ on showing dark-skinned people in a poor light. The guidelines, issued on August 17, 2014, said: “Advertising should not communicate any discrimination as a result of skin colour. These ads should not reinforce negative social stereotyping on the basis of skin colour.”

But for the middle class, fairness is still a goal that is coveted and to be achieved. For Kavitha Emmanuel, Chennai-based activist and founder of the non-government organisation, Women of Worth (WoW), even having such guidelines has done little to stem the tide and people still cling on to the idea that they are better off if they are fair.

Dark is Beautiful (DisB), a campaign started by WoW, is still on-going and aims to promote the idea that a dark middle class person can still attain acceptability. Most of its campaigners are educated and middle-class youth. But Emmanuel, who has seen some positive changes in the industry, says, “After ASCI issued its guidelines, there have been positive changes in commercials. But through association, the market still guides sensibilities, especially that of children.” The DisB campaign entered its sixth year in 2015. In 2013, the campaign got a boost with actor Nandita Das endorsing it.

Meanwhile, the khadi market has been affected by chalk sales. The stones, earlier sold in bulk two years ago are now sold in sachets. In some areas, the product has disappeared from the market as it has been replaced by chalk.

If khadi is not available, children in old city now eat chalk. Jyoti Sharma’s Pooja spoke of her neighbour and friend, Lavanya, an intermediate student, who ate up to three or four pieces of chalk a day. Some children eat lime wash used to paint houses.

…As a television set blared, the women in a house in Puranapul were engrossed in the visuals while their children sat nearby doing their homework. “I got hooked to soaps after I was forced to stop eating khadi,” says Sharma, who gave up the habit. Sharma remembered her cousin who passed away 10 years ago. The young woman in her 20s was a teacher from Alia Kotla and who was addicted to khadi. She died a year after she had her second child for reasons not known to the family. But conversation about curbing the quest for fairness was only met with a giggle. #KhabarLive