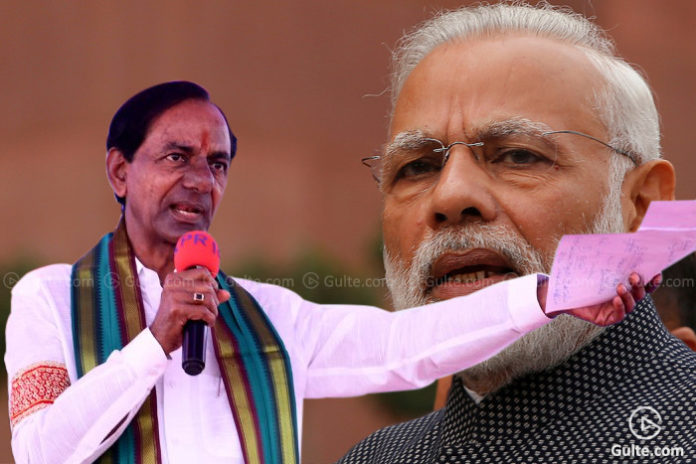 Telangana Rashtra Samithi president and chief minister K Chandrasekhar Rao has kicked up a storm in politics by floating the idea of a third alternative to the national parties – the Congress and the BJP in the form of a coalition of regional parties and demanding more powers to the states restricting the Centre to limited number of subjects.

KCR, who raised the subject at a press conference on Saturday night, intensified his pitch while addressing a large gathering of people at his camp office Pragati Bhavan, amidst slogans of “Desh ki neta KCR.”

He questioned the domination of Centre over states by controlling funds, devising even local schemes and keeping powers with it with regard to subjects like agriculture, health, irrigation and drinking water which should be dealt by the states.

He also demanded that the powers to provide reservations to weaker sections should be vested with the states and suggested that the powers of the Centre should be restricted to a few issues like foreign relations, defence, railways, national highways, aviation and so on and all the other powers be delegated to the states.

Well, what the TRS chief said at the press conference and the public meeting is not something new in national politics, nor is his talk of a third alternative to the Congress and the BJP. In fact, Telugu Desam Party founder-president N T Rama Rao had raised this subject of domination of Centre over states long ago.

The appointment of Sarkaria Commission to redefine Centre-State relations, maintain balance of power between Centre and the states and suggest suitable constitutional changes was the result of NTR’s effort. It paved way for the formation of National Front with all regional parties subsequently. He managed to bring all the regional parties on to a single platform in 1985-86 itself, but subsequently the experiment failed because of lack of coordination among the regional parties, who have their own vested interests.

Similar experiment was made for a third alternative front in 1996 with the formation of United Front with Chandrababu Naidu as the convenor. But, it was also a failed experiment for the simple reason that the coalition partners had no cohesion among them and moreover, they had to take the support of the Congress party from outside. Once the Congress withdrew its support, the United Front collapsed.

Even in 1978, the Janata Party experiment also miserably failed for the same reason and it then, had the Bharatiya Jan Sangh (now BJP) a part of it.

So, there is no guarantee that the proposed alternative of the TRS chief will also succeed.

First of all, there is no big vacuum in national politics, as the BJP has grown stronger all over the country and the Congress, too, has started gaining strength.

ALSO READ:  Hyderabad Became A Hub For 'Offbeat Sports' In All Games

The existing regional parties are backing either the Congress or the BJP for their own survival. Though some non-Congress, non-BJP forces like Trinamul Congress and Biju Janata Dal are interested in the third front, many others are still in a state of dilemma.

While the TDP is struggling to retain its power in Andhra Pradesh rather than concentrating on the Centre, the newly-formed party in Tamil Nadu of Kamal Haasan is yet to prove its worth. So, KCR has to depend on parties like Jana Sena, MIM and a few other parties. Even if Mamata or Soren support the third front, it is doubtful whether they will finally accept KCR’s leadership.

So, there is still a long way to go before KCR imagining himself to be a national leader! #KhabarLive