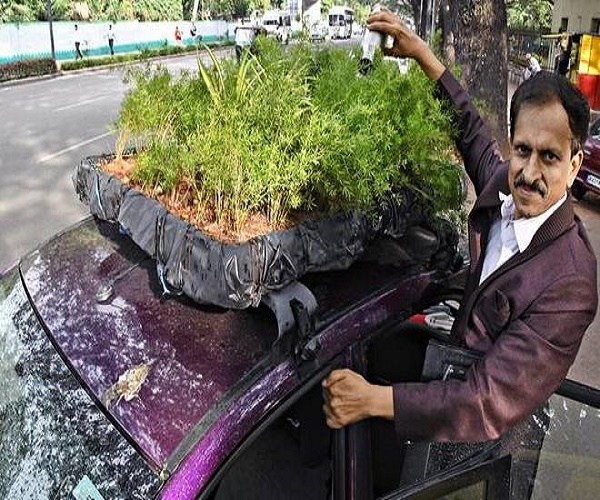 The 16 sq ft garden patch perched atop advocate K Suresh’s purple car attracts much attention of many on Bangalore streets. This is a unique environment free attuitude towards pollution free lifestyle. A purple Tata Nano has been zipping around Bengaluru with a green patch on the rooftop, giving new meaning to the term, ‘Garden City’.

Though it looks as if it is ferrying flower pots from a distance, a closer look leaves one amazed. For, there is an actual garden growing on the rooftop in red soil. “It is nearly 18 months and my car garden is still healthy. Look at the leaves, they are so fresh,” says K Suresh, an advocate at High Court of Karnataka and City Civil Court.

Why would anyone think of having a miniature garden on top of a car? “I started by growing plants around my house in 3rd Main, Chamarajpet, about five years ago. I love floral scents and my interest in greenery has gradually grown from my childhood days. When I came up with the idea of a garden on my car, initially, people laughed it off, but I still went ahead. Today, my 16-sq ft patch, perched on a carrier above, is a role model,” says Suresh.

Suresh was born in Malnad region, near Agumbe, and remained there till 1971 when he completed PUC. “I came to Bengaluru for my degree and later studied law at BMS College. “My passion for plants goes back to my childhood as my hometown is covered with a carpet of green.”

He wishes that BMTC buses and cars could add a patch of green to help Bengaluru with more oxygen. “Even if five lakh vehicles here have 15 sq ft each of greenery, the city would be richer with 75 lakh sq ft of garden space. Isn’t that awesome?” says Suresh.

The mobile garden attracts many onlookers when the car is parked. “People often ask me how I choose my plants, what medium I use and how much I spend on maintenance,” says Suresh, although he is yet to see anyone follow his idea. Growing a green patch on top of a car is not impossible, but to get the right mix of plants was difficult, says Suresh, as only experienced horticulturists know about the species that don’t wither in sunlight or rain.

Although Suresh was in touch with horticulturists in Lalbagh and Cubbon Park, it was finally an experienced gardener who put him on the right track. “A retired pruner in Lalbagh, Lingappa, came to my rescue when I met him at the Lalbagh flower show in January last year,” says Suresh.

Although the gardener changes the plants grown above the car according to the season, for the last six months, Lingappa has been growing asparagus and tulsi. “Asparagus is a tall plant with feathery foliage. It has bulb-like roots that hold on to the soil-and-cocopeat medium very well. Tulsi spreads medicinal properties into the atmosphere.

Maintenance is easy as I do not change the plants for at least four months. I use organic plant boosters that take care of their nutrients. It’s only natural sunlight and water that keeps them going in all seasons,” says Suresh, who has the medium spread out on a plastic sheet and tied to the carrier frame. “I often take my car to Mysuru too and return with my plants still fresh,” beams Suresh. #KhabarLive