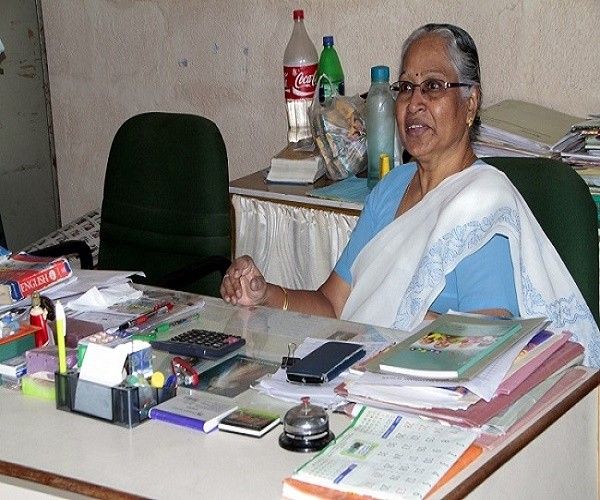 Beula Gabriel has made many sacrifices to keep the school running, including selling her own house. Of the verses and motivational slogans painted on the walls of St Joseph’s Secondary School (SJSS) in Hyderabad’s East Marredpally, the most striking one reads, “Never worry about numbers. Help one person at a time and always start with the person nearest to you.”

The quote seems to be most in line with the approach that Beula Gabriel, the principal of the school, has. Speaking to #KhabarLive, the 77-year-old started the school in 1993 with one purpose – to provide education to underprivileged children, many of whom are first generation learners in their families.

“I never close my cabin door. Children and parents are always welcome to walk in. I close it only when I eat my lunch, that too because the ayah insists,” she smiles.

Beula realised that she wanted to work to educate underprivileged children when she started another school called St Andrews in Hyderabad in 1985. But differences arose when her extended family wanted to turn it into a money-making business.

“My extended family wanted it to be like any other modern day school that would extract huge amount of fees and admit children only from the well-to-do families. I opted out of the management because I wanted to start a school where I could bring children from all walks of life – from the richest to the neediest, from highly educated families to first time school goers,” Beula narrates.

So when she started SJSS in 1993, Buela realised how ordinary it was to follow the model of other posh schools in the city that insisted on admitting kids whose parents were well versed in English.

Soon, she started bringing in students who were children of house helps, rickshaw pullers, labourers, watchmen and so on. And now, while the school is open to children from all backgrounds, the underprivileged are never turned away. It has 300 students studying from KG to Class X.

What makes SJSS even more subversive is that it does not rely on entrance tests to prefer one student over the other. “No student is ever turned away for failing an entrance test. We conduct tests only to assess the potential of students and place them at appropriate levels. In fact, we prioritise students who have been rejected from other schools, whether for academic, physical or social reasons,” Beula says.

SJSS also stands out because of their dedicated staff, many of whom have been there since the school’s inception. One such woman is Sangeeta, the school’s ayah and Buela’s right-hand. She says that all she and her kids have earned in their lives is from SJSS.

“My husband is an auto-driver. My kids also studied here. I have been working with madam from day one of the school. In between, I battled cancer. But not once did she ask me to leave my job. My kids are doing well now. I have two more years of service left and I really don’t know what I am going to do if not work at this school,” the 58-year-old says.

Beula says that her inspiration to work for a larger cause came from her mother who often brought young girls from rural areas and gave them basic education. “Though at that time, I myself was just a teen, I saw these young women transform as they learned; they gained skills, independence and above all, confidence. Maybe because my mother was always a guiding light, I always tell my kids why it is important to respect your mothers the most at home,” Beula says.

Beula’s son, Gerard Gabriel, who helps his mother in managing the administration of the school, says that Beula is nothing less than a superwoman even at age of 77. “Mom has a mission which she doesn’t compromise at any cost. She has never tried advertising the school and it’s only through word of mouth that people come to admit their kids. The school is very much a part of her existence,” Gerard says.

As the school celebrates its 25th anniversary, Beula has decided to keep away from pomp and dazzle. Rather she and her students have termed it the ‘Year of giving’.

“I have asked my students to collect grains and other basic necessities from whatever little they have and distribute it in their neighbourhoods. On the first day of this monthly program, more than 100 families received goods through the efforts of the students. Students should always know the joy of ‘giving’ and not just ‘receiving’,” Buela says.

Though Beula’s dedication to the school is apparent, it has not been easy running the institute simply on goodwill for 25 years. To ensure that the school doesn’t shut, Beula has made many sacrifices in the last two decades, including selling house she owned to pay for the building’s rent and other necessities.

“Why do I need such a big house if it’s of no use to anyone?” she argues.

Another challenge is posed by growth in population and the subsequent mushrooming of schools on every second street. “Since most of the kids are first generation school goers, we have kept the fees really low while many of them study for free. We shifted from our previous school building 3 years back. The rent for the current building keeps rising and there is also the additional cost of books, uniforms and salaries. We are now looking for sponsors who can directly fund the education of a student,” Gerard says.

But none of these hurdles are too big for Beula. Even at the of 77, she says she has no plans to retire. “My life is service and the way I serve is through education. If I can continue to transform the lives of even a handful of children for the better, that is what I will continue to do.”

As the school bell rings at 4 pm and the students rush towards the gate, Beula points at a young man in a black shirt who has come to pick his kid. She says proudly, “He too was my student.” #KhabarLive