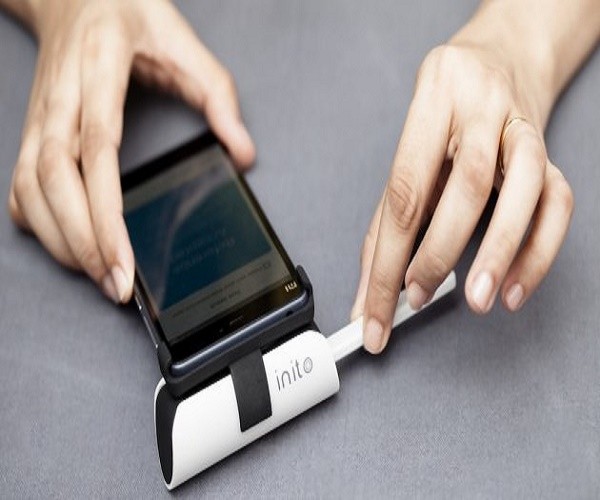 The Inito clips onto your phone and lets you measure fertility levels. And in the future, its makers say they will test for thyroid, cholesterol and much more. The Inito is a small plastic accessory that clips onto your phone like a case, analyses your urine using your phone camera, and tells you when you are likely in the most fertile phase of your ovulation cycle.

It works like any fertility monitor would: there’s a piece of chemically treated paper that has to be dipped in urine. However, instead of having to send this to a clinical lab, your phone does the testing and gives the results in five minutes. Inito comes with specially designed disposable plastic straws that hold the testing strip. The device clips onto your phone, and the camera takes pictures of the strip using a special lens that snaps onto your phone camera.

The lens allow the camera to take a clear picture at close range, and then uses computer vision algorithms to study the photo of the testing strip and measure the fertility levels. Once you’ve done a test, you throw away the strip, “straw” and all. The device, which has eight strips, costs Rs 2,699, and eight additional strips can be bought for Rs 895.

For now, these strips can only be used for fertility tests, but in the future, you’ll be able to buy strips with different chemicals on them to test thyroid or glucose levels, said Aayush Rai, co-founder of Inito.

#KhabarLive spoke to multiple women who said that they would be interested in using such a device, though they had concerns about the price and accuracy.

As smart-phone enabled medical devices like Inito become more common, privacy experts fear that users may not be considering how freely sharing data about their health and medical ailments might affect them in the future.

“People don’t have awareness about the risks different apps pose,” said Saravanan K, a Bengaluru-based consultant working on smartphone-security solutions for businesses. “Medical data in particular is highly sought after, and even a company with the best intentions could pose a risk facet for your information.”

As per the Srikrishna committee’s draft personal data protection bill, health data is classified as sensitive personal data. If this bill were to become a law, Inito—which uses an Internet connection to upload and analyse your tests on its cloud server—will be required to comply with data management requirements. Currently, the company moves user information over the internet and also tracks the results so users can track progress over time.

Rai said this was not a concern, as the company already keeps privacy in mind.

“First of all, our cloud provider is based in India, so the user’s data is not crossing any borders at all,” he explained. “The data is end-to-end encrypted, and there is data management to prevent us from accessing the data as well. Obviously, a few team members have administrative access for troubleshooting, but it’s very limited.”

However, he also added that customers themselves are not that concerned about the data. “People tell us, you have this data, please look at it and give me health advice, nutrition. As long as their name is not being shared, people are not worried,” he claimed.

Oneof the women #KhabarLive spoke to, a 32-year-old school teacher from Bengaluru, said that as long as Inito isn’t sharing the data with third parties, she isn’t concerned. “This isn’t something that I want the world to see, but I don’t think I can be affected by a company knowing my fertility level. This is just useful,” she said.

She and her husband have sought medical advice after attempting unsuccessfully to have children. As it turns out, the doctor also wants to check details about fertility levels, and she said it isn’t particularly different from what Inito is offering.

Fertility treatments in India can be expensive and uncomfortable, and there is often stigma associated with seeking medical help to conceive.

“If I can do this from home, and get a chart showing me the details in five minutes, it sounds good to me,” she added.

Another woman, a 33-year-old documentary filmmaker who also lives in Bengaluru with her husband, said that she has suffered from multiple miscarriages, and that’s why she’s been visiting the doctor.

Although she agreed that the Inito looked user-friendly and could be helpful, particularly if it adds more tests to its repertoire, she had her doubts about how easy it would be to use.

“You’re saying it’s foolproof, but I don’t think anything really is,” she said. “I have to get multiple tests done, like thyroid and estrogen and sugar levels, if I could get all these done with just this, it would be more appealing.”

“But it’s just one test and the strips aren’t something you can walk down to the store and buy, so I don’t want to be the guinea pig.”

The other big challenge that Inito will face is production. The device has been under development for three years, and went on sale in December 2017. Started by two former IIT-ians who met at Siemens’ hardware division, the company is only selling online, since it can’t commit to quantities that would make sense at retail right now.

Although Rai did not disclose how many units have been sold since the launch, he said that Inito carries out around 5,000-6,000 tests per month. Assuming two tests per cycle, that’s only around 2,500 customers in the last ten months. “We’re growing fast right now, at about 25-30% month on month,” said Rai, “which is about what we can manage right now.”

Parts are being sourced from around the world, but assembly happens in a facility in Bengaluru. This isn’t a problem unless numbers grow significantly, said Rai.

However, this does mean that Inito is not likely to be a mass product anytime soon, which brings up the next problem that people will likely face—not many doctors are comfortable with the idea of an unknown third-party device doing the testing.

Although Inito has a number of doctors on board as advisors, the doctors that spoke to #KhabarLive were still sceptical.

“We have our own lab in the clinic, and I would strongly urge any patient to use that because I know that the test is accurate,” said Dr Rucha Sharma, of the Garvhavati Fertility Clinic in Bengaluru. “Or if you’ve gone to a proper lab so that I know that I can depend on this.”

Another doctor, who works at Columbia Asia Hospital, who said she couldn’t be quoted by name because she hadn’t been authorised by the hospital, said, “If you tell me the first time that you’re bringing me a result that your phone gave to you, I’m going to tell you to do the test again. If it matches, I’ll still prefer that you go to a lab, but I won’t insist on it.”

However, Rai said that we’ve reached a stage where people are highly invested in tracking their health, and pointed to the popularity of fitness trackers. “People want to keep track of things themselves, and have a say in their treatment, and doctors are going to have to get used to the idea,” he said. However, considering its low scale of production, this kind of change is likely going to be a big challenge for the company.

Patients also have some scepticism about accuracy. One of the women #KhabarLive spoke to at a fertility clinic is a 34-year-old marketing executive with ITC. She has been receiving treatment for polycystic ovary syndrome for a year, which caused certain complications in her attempts to conceive.

On its website, Inito lists success stories showing customers who did use the product, and were able to conceive. And on Amazon as well, there are some customer reviews, with more than half being the highest-possible 5-stars, showing that at least some people were willing to give it a chance, and found it useful. There is only one negative review, saying the test results are wrong.

Despite the challenges, Rai is still optimistic, and said that the company has a lot of plans for the future. It’s looking at a global market, at which point it will have to meet international regulations and standards. Beyond that, the company is also working on follow-up strips—to test for conditions such as diabetes or thyroid imbalances.

“We are also looking at things like putting a QR code on the strip so the app can tell you if it’s expired or if it’s fake,” Rai explained. “What we’ve done is not a new concept, but what we’ve done, with the optics and connectivity are new, and although there are a few other companies that are also working in this same space, they’re still developing their product.”

And Inito’s customers are from different parts of India, even smaller towns. “Srinagar and Guwahati are in the top 10, apart from the cities you’d expect, like Bengaluru, Delhi and Mumbai,” he added. #KhabarLive